Hillary Clinton
stated on February 11, 2016 in a Democratic presidential debate in Milwaukee:
"Americans haven’t had a raise in 15 years."

During her opening statement at the Democratic presidential debate in Milwaukee, Wis., Hillary Clinton tried to channel the frustration that has led many voters to consider backing her opponent, Bernie Sanders.

"I know a lot of Americans are angry about the economy, and for good cause," Clinton said. "Americans haven’t had a raise in 15 years."

Many individual American households have seen their incomes rise since the turn of the century. But we’ll take a look at the most basic measure of how well Americans more generally are doing income-wise -- namely, median household income, adjusted for inflation.

As shown in the following graph from the Federal Reserve Board of St. Louis, inflation-adjusted median household income generally rose between 1984 and 1999, then began falling starting in 1999 and 2000. 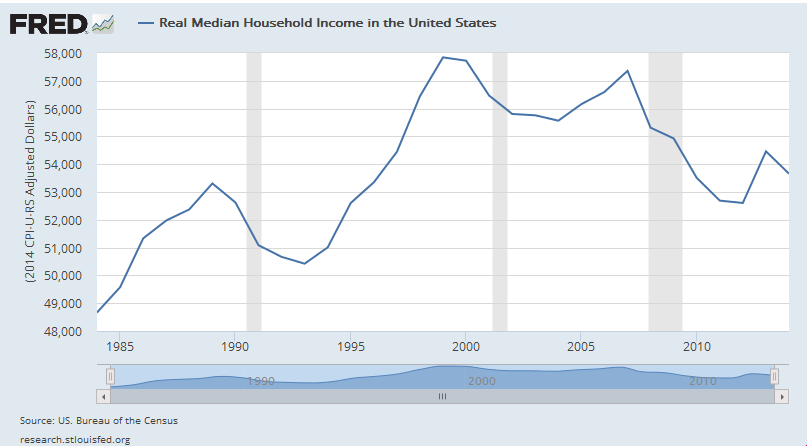 So by this measure, Clinton is correct.

Other statistics are somewhat less clear-cut.

Consider the median usual weekly earnings for full-time wage and salary workers age 16 and over. Here’s the St. Louis Fed’s graph for that statistic: 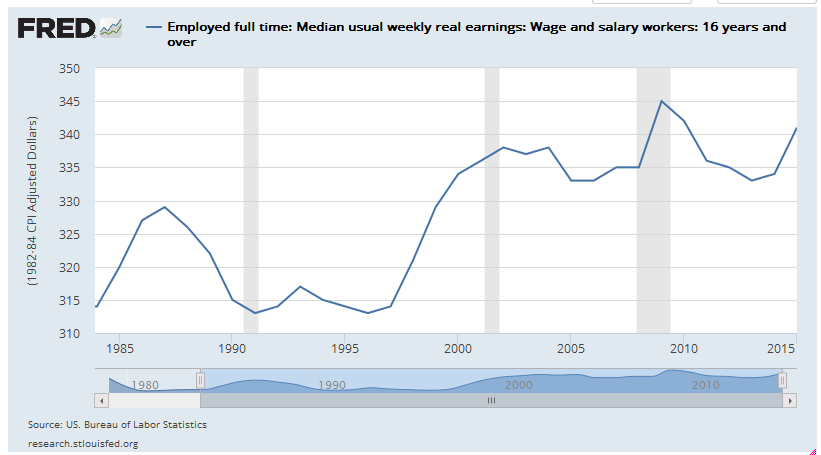 In one sense, wages are a reasonable yardstick to use in judging Clinton’s claim, since this statistic focuses on people who are employed full-time on a wage and salary basis -- the very kind of people who would be in line to "get a raise" if employers were so inclined.

On the other hand, median household income is the broadest measure of income growth. Many households either see a share of their income in government transfer payments, such as Social Security, or from investments, rather than wages or salaries, and this income is not reflected in the the second statistic we looked at. Because median household income encompasses a wider range of income sources, it’s reasonable for Clinton to base her statement on that measurement.

Clinton said, "Americans haven’t had a raise in 15 years." Using inflation-adjusted median household income, she’s right. There has actually been a decline of 7 percent over that period.

However, earnings of wage and salary workers have risen over that period -- by about 2 percent. That’s a tepid increase. But, it is an increase.

PolitiFact, "Economy is 'too weak to raise income levels,' says Nikki Haley in State of the Union response," Jan. 12, 2016