Donald Trump
stated on February 21, 2016 in an interview on "Meet the Press":
With Obamacare, "You have no options .. you can't get competitive bidding."

Trump was referring to the Republican idea of allowing insurance companies to sell in multiple states in one fell swoop, rather than through the state-by-state permitting process that happens today. Trump also believes in health savings accounts and some sort of program for the very poor.

When NBC host Chuck Todd asked him about his view on mandates, Trump said no one would be forced to buy health insurance, unlike the law says today.

But we were struck by his statement that "right now, you have no options."

We reached out to the Trump campaign to learn what he specifically meant and did not hear back. Trump’s comments seemed misleading because a major part of the health care law is set up to encourage competition and give people options.

Does the law achieve that? The short answer is, for most people it does. However, in more rural counties, residents might have to choose between only one or perhaps two insurance companies. Those people have few options.

The new health care law sets up exchanges or marketplaces, primarily online but also accessible through various government offices, where people can pick from roughly comparable insurance plans for which the main difference is price. The law puts each plan into one of four tiers -- bronze, silver, gold and platinum. The more generous, and costly, the plan, the higher the tier.

The government’s Centers for Medicare and Medicaid Services reported that for 2016, about two-thirds of the counties have three or more insurers offering plans at the silver level. (This only has to do with plans on the exchanges, and primarily the exchange run by Washington. Employer-provided insurance is altogether separate.)

A more detailed analysis for 2016 by the Kaiser Family Foundation, a research center widely seen as a source of objective data, found wide variation across the country. In Indiana, for example, residents in every county have at least four carriers to choose from. In contrast, in Oklahoma, no county has more than two companies competing with each other.

Out of about 2,600 counties in the Kaiser study, 10 percent, or about 260, have just one insurance company offering any policies. 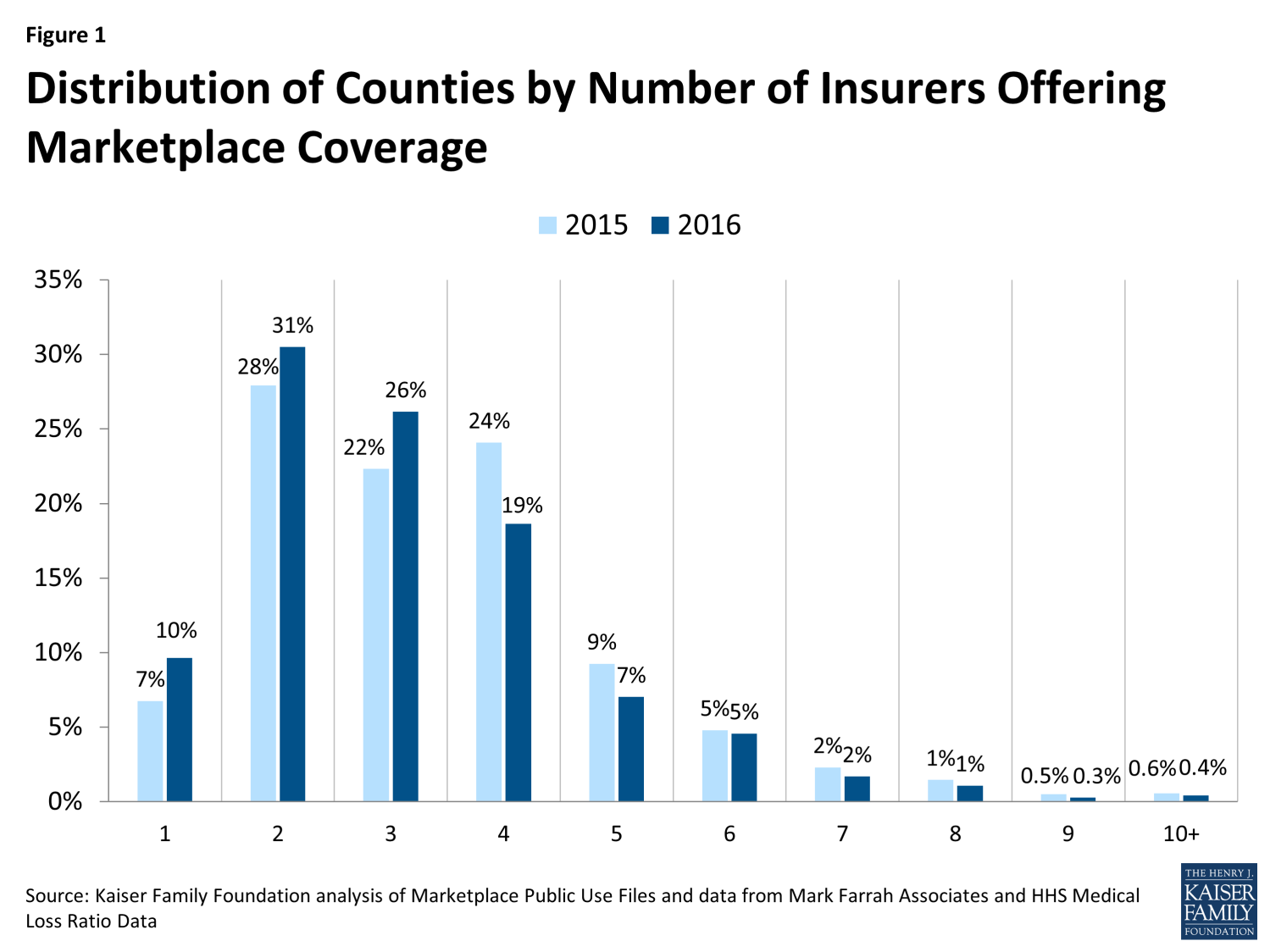 As the table above shows, while people in most counties can choose from among three or more insurers, the change from 2015 to 2016 is toward less competition, not more.

"There are a lot of things to criticize about the Affordable Care Act -- too rigid and regulated in terms of the benefits that must be offered, etc. -- but most exchanges have several options available and some have many options," said Gail Wilensky, who headed the Medicare program during the George H.W. Bush administration and now is a health care analyst with Project Hope.

The Centers for Medicare and Medicaid Services reported that 9 out of 10 returning customers using the national exchange, healthcare.gov, were able to choose from among at least three companies.

The Kaiser Family Foundation noted that the lack of competition is greatest in rural communities. The higher the percentage of rural residents, the lower the number of insurers. "There are fewer potential enrollees to attract insurers and also fewer health care providers with whom they can contract," the report said.

Robert Laszewski, a private analyst with Health Policy and Strategy Associates, offered a different interpretation of Trump’s words. Laszewski said Trump could have meant that for lower-middle income people, none of the plans are actually affordable.

"These policies have come to be very expensive both in terms of premiums and deductibles," Laszewski said. "In that sense the choices are very limited."

It is also worth noting that because rural counties have fewer people, the fraction of the population that faces no real choice is less than than the fraction of counties where that is a problem. Most Americans live in urban areas where insurance competition is more robust.

Trump said that under Obamacare, "you have no options," for health insurance plans. That is true in about 10 percent of the counties where individuals buy their coverage on the government’s insurance exchange. In another 30 percent of counties, people have only two companies to choose between.

But the people living in about 60 percent of the rest of the counties have at least three insurance providers to compare.

There’s an element of truth in Trump’s words, but his statement leaves out a lot of information that would leave a different impression. We rate this assertion Mostly False.