Gavin Newsom
stated on December 5, 2015 in a campaign email:
"So far in 2015, there have been more mass shootings than days."

Editor's Note: We’ve received questions about our Mostly False rating on this fact check, with some saying we relied on a definition of mass shooting that’s too limited. As we stated in the fact check, there is no legal definition for this act of violence. We agree there’s room for interpretation about how many deaths or injuries should constitute a mass shooting. And we’ve added the perspective of gun control advocates to this fact check to convey that sentiment.

We maintain, however, that the statements we fact checked used the most overly broad definition of this type of crime, a definition that goes beyond what the average person would consider a mass shooting.

What is a mass shooting?

There’s no legal definition. But a key congressional report defines it as a shooting that kills four or more people. Think Columbine. Virginia Tech. San Bernardino.

From 1999 through 2013, there were about 21 mass shootings each year in the United States, according to a congressional analysis of FBI data. Roughly four took place annually in public settings, like at schools, restaurants or workplaces. Another 17, on average, took place in private homes or other locations. More recent FBI data was not available.

"So far in 2015, there have been more mass shootings than days," Newsom said in a Dec. 5, 2015 email promoting a gun control initiative he’s introduced. Newsom references the San Bernardino mass shooting in his email. That attack killed 14 people, injured 22 others and took place on Dec. 2, 2015.

Pan added in a press release on Jan. 19, 2016 that "there were more mass shootings in America where four or more people were killed, than there were days in the year in 2015."

We wondered: Did mass shootings in America somehow skyrocket from about 20 annually to more than 300 overnight? Or were Newsom and Pan using a definition of this kind of crime that reflects a different view of reality?

Newsom is running for California governor in 2018. He has introduced a gun control initiative for the November ballot that would require most Californians to pass background checks to purchase ammunition. Pan, who represents the Sacramento region, recently proposed legislation that would require the state to track gun deaths. Both are Democrats.

Let’s dive into the lieutenant governor’s statement first. He made the claim that there had been more mass shootings than days in 2015 on Dec. 5, or day 339 that year.

Representatives for Newsom and the Courage Campaign said the politician, in making his claim, relied on news reports that cited gun violence tracking websites, including what was until recently known as ‘Mass Shooting Tracker.’

That website, now known as ‘Gun Violence Archive,’ used crowd-sourced information and a much broader definition of mass shooting than the congressional report. It counted mass shootings as any incident, anywhere, in which at least four people were shot, but not necessarily killed.

By early December 2015, Mass Shooting Tracker reported there had been 353 mass shootings in America so far that year.

Criminologists told us the website’s broad definition lumps in more shooting categories, such as gang-related crimes or robberies, than typically associated with mass shootings. Several said this is purposely done to inflate the statistics.

David Kopel is a professor at Denver University’s Sturm College of Law. He has written several books from a gun rights perspective.

"The problem with the way Gavin Newsom is using this pseudo data is it’s out of context and is done in a way which is calculated to cause confusion," Kopel said. "When people hear the term mass shootings, I think what they think of are things like the San Bernardino attacks or the Newtown crime. … By that definition, the number is far, far smaller."

Gun control advocates say there’s no good reason to require that four people die before calling a crime a mass shooting. Using that threshold, they point out, would mean a February shooting in Kansas in which three people were killed and 14 were injured would not be considered a mass shooting.

"It is arbitrary to distinguish between a death and an injury," said Ari Freilich, staff attorney at the San Francisco-based Law Center to Prevent Gun Violence. "We shouldn’t have to be waiting outside a hospital room to see if the victim is going cling to life to call it a mass shooting."

Freilich said the definition for a mass shooting should be an incident in which a dangerous person is able to shoot four or more other people, regardless of whether anyone is killed. 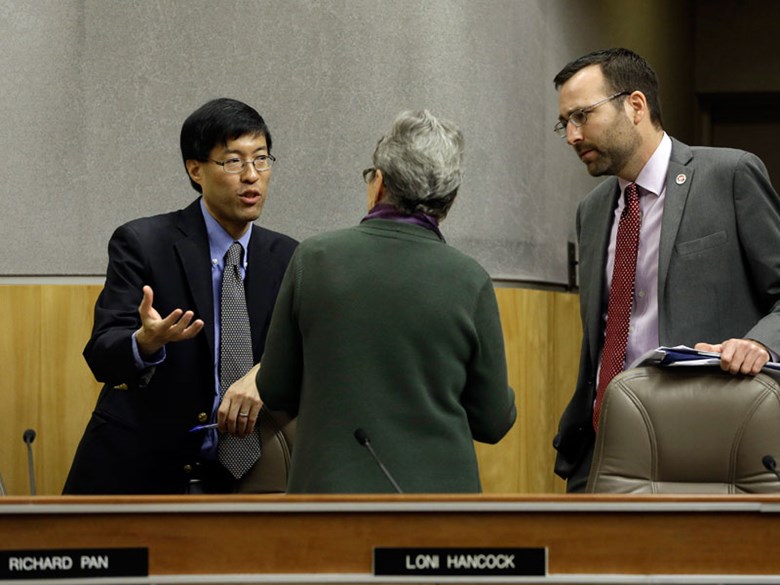 State Sen. Richard Pan's claim was "there were more mass shootings in America where four or more people were killed, than there were days in the year in 2015."

When contacted by PolitiFact California, a spokeswoman for Pan said the press release from the senator’s office mistakenly omitted the full definition used by the shooting tracker website. She then issued a new press release with Pan quoted as saying a mass shooting is defined as four or more people "shot or killed."

Pan relied on news reports that cited the shooting tracker website to back up his claim, the senator’s spokeswoman said.

Again, the experts told us, that website tracked far more than what would be considered mass shootings.

"Once you drill down through the data, you find that there are very different particular reasons for those shootings, or for those injuries," said Ryan Getty, a professor of criminal justice at Sacramento State University.

Getty said the data might be derived from a family shot "trying to defend their home against home invaders." But, instead, "people just assume that it’s events like what happened in San Bernardino."

As PolitiFact Florida reported, "Politicians or others who want to make a point about guns choose a set of data and a definition that reinforces the point they want to make. People who want more gun control tend to choose more expansive definitions."

"Those who want to create a sense of crisis over the violence will tend to use lower cutoffs, while those who want to minimize the problem will use higher cutoffs," Gary Kleck, a criminology professor at Florida State University, told PolitiFact Florida, which evaluated a similar mass shooting statement.

William Krouse of the Congressional Research Service authored the report "Mass Murder with Firearms: Incidents and Victims, 1999-2013." That’s the report that shows about 21 mass shootings took place per year, using the stricter definition of at least four people killed.

Krouse said federal data for the past two years is not widely available. But, he added, USA Today’s tracking of this type of crime is the best available. It shows 18 mass shootings took place in 2014 and 25 last year.

Following the shooting in San Bernardino that killed 14 people and injured 22, California Lt. Gov. Gavin Newsom and state Sen. Richard Pan claimed that hundreds of mass shootings took place in 2015. They used an extremely broad definition of mass shooting — one that includes incidents in which people are shot but no one is necessarily killed.

A key congressional report defines a mass shooting as an incident in which four or more people are killed. Criminologists say this definition is more in line with events like the shootings at Columbine, Virginia Tech or in San Bernardino.

As we said at the beginning, there is no legal definition for a mass shooting. The California politicians chose a broad definition by using a crowd-sourced website that better fits their gun control goals.

We rate their claims Mostly False.

MOSTLY FALSE – The statements contain some element of truth but ignore critical facts that would give a different impression.