Drew Brees
stated on June 12, 2016 in as quoted in an interview with Kirk Bohls of the Austin American-Statesman:
"Do you know what the second sport with the most concussions is? Women’s soccer… And the third most dangerous sport? Cheerleading."

But the Austin native, who led the Westlake High School Chaparrals to a state football championship in 1996, stirred our curiosity in his June 2016 interview with Kirk Bohls of the Austin American-Statesman when he said: "Do you know what the second sport with the most concussions is? Women’s soccer. But do you see anyone telling their daughters not to play soccer? And the third most dangerous sport? Cheerleading. You understand the risk with every sport you play."

Our attempts to draw Brees’ backup information failed. But we took him to be saying women’s soccer and cheerleading rank second and third, respectively, in the incidence of concussions.

Unsurprisingly, perhaps, we confirmed that football consistently poses the greatest concussion risks. Women's or girls soccer, which has surged in popularity since the 1980s, often places a distant second by this metric, we found, with the chances of a concussion from cheerleading much lower.

As we looked into the soccer portion of Brees' claim, experts pointed out a 2014 report, "Sports-related Concussions in Youth," sponsored by the federal Centers for Disease Control and Prevention with backing from the National Football League, the Department of Defense and the National Institutes of Health. The report, collating several studies, said: "Soccer, lacrosse, and basketball are associated with the highest rates of reported concussions for U.S. female athletes at the high school and college levels."

A report chart shows that according to four studies of concussions in sports, football consistently placed first with six to 11.2 concussions per 10,000 "athletic exposures," a term meaning the number of practices and competitions in which an individual actively participates (i.e., in which he or she is exposed to the possibility of athletic injury). 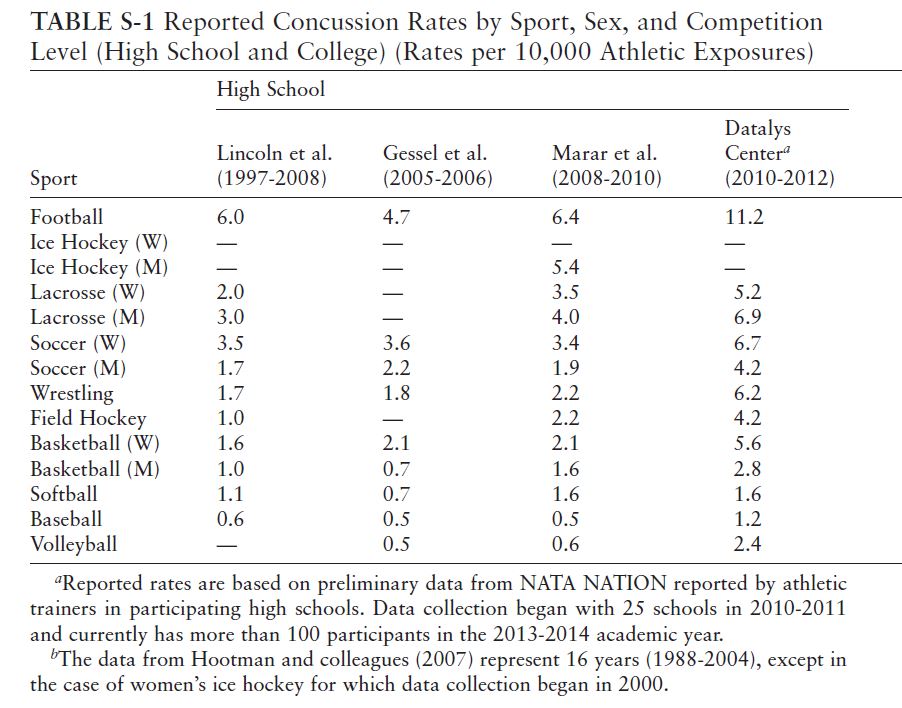 In a 2015 report, Dawn Comstock, a professor at the Colorado School of Public Health, and others synthesized nearly 50 studies to pinpoint the causes of concussions among American youth soccer players. According to a summary, the authors found that contact with another player was the most common cause with heading the ball the reason for 25 percent of concussions among girls.

We reached out to Comstock for more perspective. By phone, she told us that a general factor to acknowledge is the likelihood of female athletes more likely revealing concussion symptoms because females are more likely than males to discuss health-related issues. "We honestly don’t know if girl soccer players are sustaining more concussions than boy ice hockey and lacrosse players or if they’re just more likely to be diagnosed because they’re more likely to report their symptoms," Comstock said.

The 2014 national report says of cheerleading: "Concussions and other closed-head injuries account for 4 to 6 percent of all cheerleading injuries," a conclusion attributed to a "policy statement" from the American Academy of Pediatrics, "Cheerleading injuries: Epidemiology and recommendations for prevention." But the 2012 statement says concussion rates in cheerleading, 0.6 per 10,000 athletic exposures, have been relatively low compared with other  girls’ high school sports such as soccer (3.6), basketball (1.6-2.1), lacrosse (2.0), softball (0.7-1.1), and field hockey (1.0).

Troubling note: From 1998 to 2008, the academy says, concussion rates in cheerleading increased by 26 percent a year, greater than any of the other girls sports studied. "Concussion rates increase with age and competitive level," the statement says, "likely because of the increasing difficulty of stunts."

The 26 percent figure traces to a regional 2011 study of concussions among high school boys and girls in a dozen sports in 25 Fairfax County, Virginia schools from 1997-98 through 2007-08.

Football also had the highest concussion rate, the study says, with 6.0 concussions for every 10,000 athletic exposures. Among the studied girls sports, the concussion rate for girls soccer, 3.5/10,000 AEs, far outpaced the 0.6 rate for cheerleading--with the latter having the lowest rate of the girls sports including basketball, lacrosse, field hockey and softball.

By phone, the study’s lead author, Andrew Lincoln, director of the MedStar Sports Medicine Research Center, told us that while cheerleading can be dangerous, its concussion rate is low.

Lincoln pointed us to the North Carolina-based National Center for Catastrophic Sports Injury which issued a 2015 report indicating that from fall 1982 through spring 2014, female cheerleading ranked only behind football, in U.S. high schools, for its number of "direct catastrophic events," meaning severe injuries such as fractured vertebra to incidents resulting in paralysis or even death. Worse, once the number of participants in each sport is factored in, cheerleading ranked No. 1 for its rate of such events. Among college sports, the report said, football had the highest number of direct catastrophic events, followed by female cheerleading and baseball.

We heard more about cheerleading risks from Chris Nowinski of the Center for the Study of Traumatic Encephalopathy at the Boston University School of Medicine. By email, Nowinski pointed out a May 2014 analysis on FiveThirtyEight.com that quoted Comstock saying: "Cheerleading is not nearly as dangerous a sport as some of the previous research painted it to be."

Comstock’s focus was on concussions. Among a set of high school athletes tracked across 20 sports from 2008 through 2010, Comstock said, cheerleading had the 10th-highest concussion rate.

An accompanying chart indicates 1.4 concussions per 10,000 AEs for cheerleading. In contrast, football had a 6.4 rate, per the chart, girls soccer had a 3.4 rate--and five boys sports plus girls lacrosse, field hockey, basketball and softball each had higher concussion rates than cheerleading.

A wrinkle: Cheerleading was the only sport in the study with a higher risk of concussion in practice (1.4 per 10,000 AEs) than in competition (1.2 per 10,000)--a result Comstock attributed to cheerleading not widely being recognized as a sport, hence subject to practices in parking lots and on other sketchy surfaces.

Far less frequent were concussions among participants in cheerleading competitions, Comstock said, at a rate of 1.8 for every 10,000 AEs.

The professor also pointed us to a 2015 study she helped author stating that from 2009-10 through 2013-14, concussions were nationally the most common cheerleading injury even though concussion rates were significantly lower than in other sports.

Brees said: "Do you know what the second sport with the most concussions is? Women’s soccer… And the third most dangerous sport? Cheerleading."