Andrew Napolitano
stated on June 16, 2016 in a segment on Fox & Friends:
"Attempts to find things like, ‘crime,’ ‘criminal activity,’ ‘indictment,’ have been filtered out by Google" in favor of Hillary Clinton.

Is America’s most popular search engine trying to make us forget about Hillary Clinton’s email woes?

The hosts of Fox & Friends explored this angle in a June 16, 2016, segment that started with a video clip contrasting autocomplete predictions for searching "Hillary Clinton cri" on Google, Yahoo and Bing. After watching the video, which was from a website called SourceFed, Fox News’ chief judicial analyst Andrew Napolitano accused Google of hiding Clinton’s problems.

"The clip that we just ran is the result of a very extensive test, an examination, about whether or not attempts to find things like, ‘crime,’ ‘criminal activity,’ ‘indictment,’ have been filtered out by Google, and we know that it has," Napolitano said.

We wanted to find out for ourselves if Google manipulates search suggestions in favor of Clinton.

The SourceFed video, posted on YouTube June 9, shows how certain terms, when searched with Clinton’s name, don’t autocomplete as suggestions underneath the search bar.

No suggestions for "Hillary Clinton crime" itself. 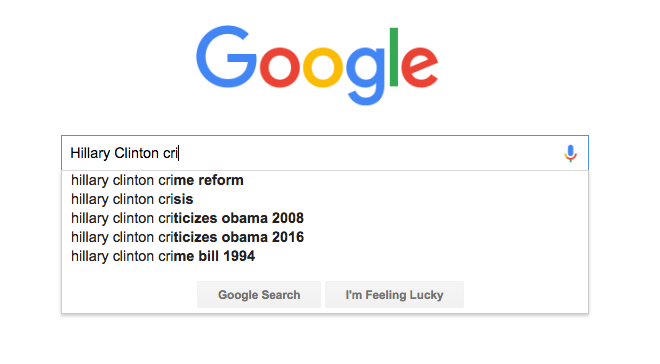 However, Bing and Yahoo bring up "crimes" and related returns when you search "Hillary Clinton cri."

Searching for the truth

SourceFed clarified its original video with another one June 10, which included comment from Google denying the accusation. CNN Money also put its two-cents in the mix, saying Google’s algorithm was set up to filter-out offensive information.

In a statement, a Google spokesperson says the filter "operates according to the same rules, no matter who the person is."

"The autocomplete algorithm is designed to avoid completing a search for a person’s name with terms that are offensive or disparaging," the statement says. "We made this change a while ago following feedback that Autocomplete too often predicted offensive, hurtful or inappropriate queries about people."

The statement linked to a Vox article that refutes the idea Google is manipulating autocomplete in favor of Hillary Clinton. The article says that most people who are accused of crimes but were not convicted will not show up in suggestions.

We wanted to test Vox’s theory, so we searched "Casey Anthony cri" and "George Zimmerman cri." Both were suspects in criminal murder investigations and were acquitted. The autocomplete yielded no suggestions.

We wanted to try other presidential candidates and common allegations against them.

"Google is the market leader among search engines by far, so its actions have a much larger impact than those of other search engines," said Susan Worst, a lecturer in computer science at Boston University said. "That it would be leading the way in modifying its autocomplete algorithm is not unusual at all."

Worst cited an instance last year when Google made corrections to its algorithms after its photo recognition project delivered racist results to users.

For many years, autocomplete algorithms were based on what others have typed in the past, but the possibility of Google changing its algorithm to detect offensive term suggestions isn’t that surprising, said Marti Hearst, a professor at the University of California at Berkeley School of Electrical Engineering and Computer Sciences. She said major search engines update algorithms frequently to assimilate to the "changing online environment."

"Algorithms have to be clever to show the best few choices, according to very complex measures of ‘best,' " Hearst said. "No doubt there are filters for curse words, and as time has gone by and the tenor of our times are getting more divisive, I would not be surprised if an algorithm has been developed to detect terms that feel offensive to a large segment of the population."

Napolitano accused America's most popular search engine, Google, of scrubbing search suggestions in favor of Clinton. Although it is clear Google’s algorithm is different from Bing or Yahoo, it still isn’t correct to describe the difference as evidence of Google’s support of Clinton.

Google’s suggested searches, for the most part, avoid offensive suggestions for everyone, not just Clinton.

Napolitano’s claim has a thread of truth, but it leaves out key details that would give the reader a different impression. We rate this claim Mostly False.

Media Matters For America, "Fox & Friends Hypes "Conspiracy" That That Google Is Manipulating Searches To "Bury The Bad Stuff" On Clinton", June 16, 2016

Email interview, Marti Hearst, professor for the University of California at Berkeley’s school of Electrical Engineering and Computer Sciences, June 17, 2016