Donald Trump
stated on March 13, 2016 in an interview on "Meet the Press":
Says the man who rushed the stage at him in Dayton, Ohio, "had chatter about ISIS, or with ISIS" in his social media posts.

Despite evidence to the contrary, Donald Trump on Sunday morning repeated his charge that a man who rushed at him in Dayton, Ohio, had ISIS affiliations.

The March 12 incident at a Trump rally at the Dayton airport involved Thomas DiMassimo, 22. According to police, DiMassimo jumped a barrier and rushed the stage where Trump was speaking. Secret Service agents tackled him and took him into custody. DiMassimo was charged with inducing panic and disorderly conduct and was released from Montgomery County Jail later the same day.

On NBC’s Meet the Press, host Chuck Todd noted that after the Dayton rally, Trump tweeted a video that purportedly showed DiMassimo posing with a gun against the backdrop of an ISIS flag, with Arabic-language music playing in the background.

Trump’s tweet said, "USSS (U.S. Secret Service) did an excellent job stopping the maniac running to the stage. He has ties to ISIS. Should be in jail." The link to the video was appended to the tweet. 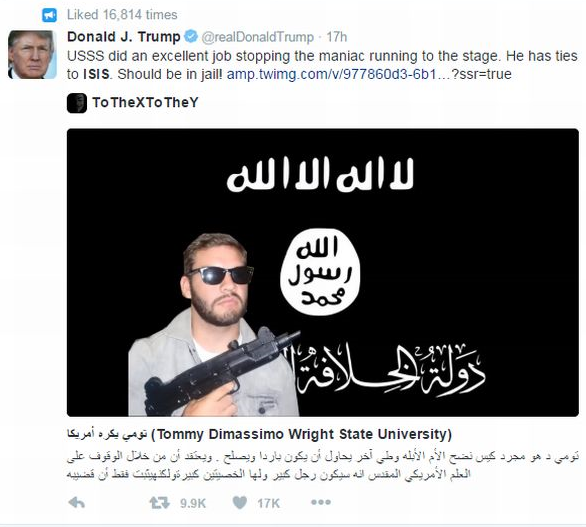 On Meet the Press, Todd said, "That turned out to be a hoax. Did you go over the top there on that?"

Todd repeated, "It turned out to be a hoax. Somebody made that up, sir."

After further back and forth, Trump said, "No, excuse me, you didn't see the clip. He was playing Arabic music, he was dragging the flag along the ground, and he had Internet chatter with ISIS and about ISIS. So I don't know if he was or not. But all we did was put out what he had on his Internet. … (He) had chatter about ISIS, or with ISIS."

When Todd repeated that the video appeared to be a hoax, Trump responded, "Okay, look, well, was it a hoax that he's dragging the flag? Was that him? It looked like the same man to me. He was dragging a flag along the ground and he was playing a certain type of music. And supposedly, there was chatter about ISIS. Now, I don't know. What do I know about it? All I know is what's on the Internet."

We decided to take a closer look at whether DiMassimo "had chatter about ISIS, or with ISIS" on his social media posts. (Trump’s campaign did not respond to an inquiry for this article.)

DiMassimo, who could not be reached for comment, has a long history of anti-racist activism, often with a confrontational bent. For instance, he was apparently filmed on Aug. 12, 2015, destroying a Confederate battle flag at a protest at Stone Mountain, Ga. 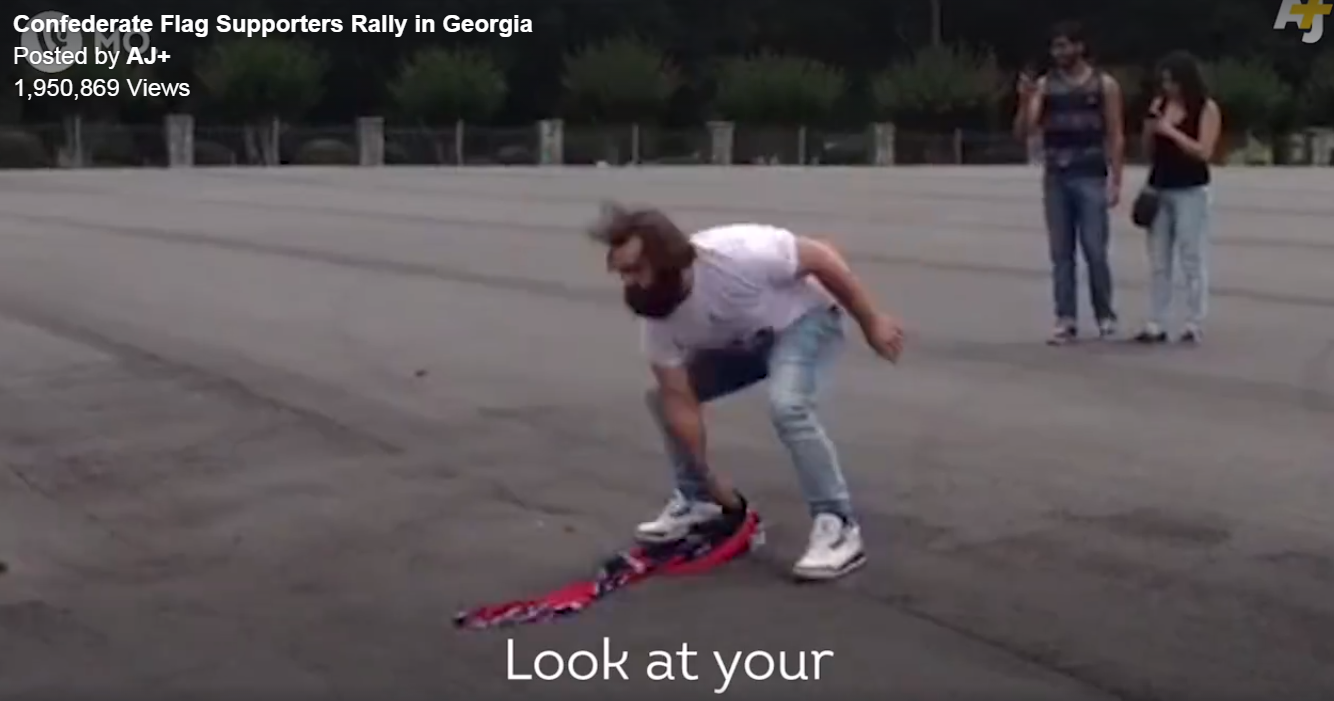 As it turns out, there is a similar video to the one Trump tweeted that apparently involves DiMassimo -- but it doesn’t show anything related to ISIS.

The video, uploaded by YouTube user "Tommy DiMassimo," shows a man who appears to be DiMassimo taking part in a protest at Wright State University, where he is reportedly a student, in April 2015. The video shows him dragging a United States flag behind him, and ultimately standing on it. 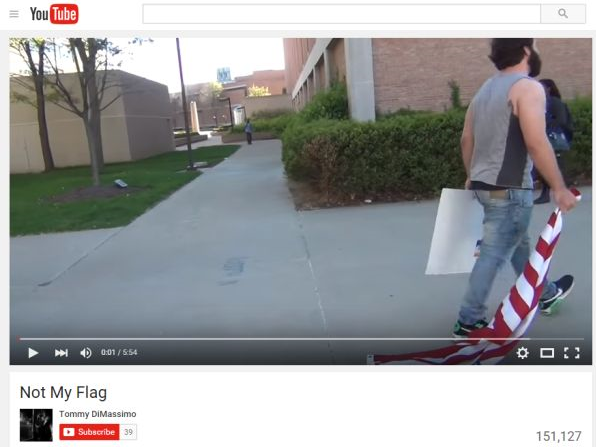 Trump, in the Meet the Press interview, seems to be correct that genuine video exists of DiMassimo dragging the U.S. flag. And we expect that Trump won’t be the only American disturbed by such images.

However, that’s not the same thing as DiMassimo being linked to ISIS.

Trump’s tweet made the connection based on an edited version of the video DiMassimo originally uploaded. Unlike DiMassimo’s original uploaded video, the one Trump linked to includes an image of DiMassimo armed and in front of the ISIS flag, as well as Arabic-language music. (The post also fails to capitalize the first "M" in DiMassimo’s last name.)

The version Trump linked to also includes Arabic text in the description, but according to BuzzFeed, "the Arabic is badly garbled, but appears to say ‘Tommy D’ was trying to look ‘cool’ and as if he has big balls for standing on an American flag."

BuzzFeed tracked the video with the ISIS imagery to a May 2015 upload by someone named Thomas Jenners, whose account has since been deleted. It also found a Facebook page called "Tommy dimassimo wasn’t hugged enough as a kid" that was dedicated to trolling DiMassimo, including ISIS-related jabs. Here’s one: 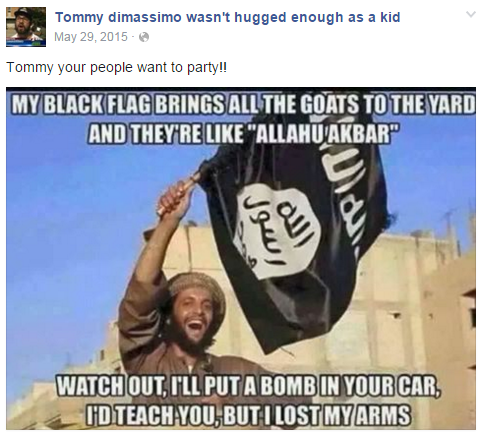 Put it all together, and all signs point to the video Trump tweeted being either a hoax or an effort to troll DiMassimo.

When we contacted Andrew Kaczynski, BuzzFeed’s specialist in debunking Internet hoaxes, he said his conclusion is that "there's nothing linking him to ISIS."

Further supporting the hoax theory of the ISIS video is that the criminal justice system has not treated DiMassimo as an ISIS-linked or ISIS-inspired terrorist -- even though the high-profile incident and the involvement of the Secret Service would have made such a linkage, if it were real, an urgent issue of national security.

The fact that DiMassimo was released within hours of the incident is something that would be almost inconceivable if he had truly been a terrorist linked to ISIS, said Daveed Gartenstein-Ross, a terrorism expert at the Foundation for the Defense of Democracies.

"If the guy had actually made an ISIS video while doing his activism, then the feds would have certainly come across it," Gartenstein-Ross said. "And then there would be a number of things he could be charged with, such as material support for terrorism. There would certainly be an argument that he poses a threat to the community for his pro-ISIS ties, which means they could have detained him pending trial."

The police report of the incident, obtained by the Dayton Daily News and shared with PolitiFact, says DiMassimo told police that he intended to take Trump’s microphone and yell, "Donald Trump is a racist." The report makes no mention of ISIS or Islamic terrorism.

Trump said Thomas DiMassimo, the man who rushed at him in Dayton, Ohio, "had chatter about ISIS, or with ISIS" in his social media posts.

There is lots to offend people on DiMassimo’s social media posts. But there doesn’t appear to be any legitimate connection between DiMassimo and ISIS. The link Trump tweeted was a hoax or an effort to troll DiMassimo. It’s also unlikely that someone who really had ISIS ties and who had been arrested for threatening a presidential candidate on live television would be quickly released from custody pending trial. The police report of his arrest makes no mention of ISIS or Islamic terrorism.

UPDATE, March 14, 2016: In an interview with CNN on March 13, DiMassimo "vehemently denied belonging to ISIS. He told CNN the video was doctored and provided a link to what he said was the original footage from a protest he participated in more than a year ago."

Says the man who rushed the stage at him in Dayton, Ohio, "had chatter about ISIS, or with ISIS" in his social media posts.

Daily Mail, "Revealed: Man, 22, who left Trump visibly shaken after rushing the stage at his Ohio rally is a former child actor who caused uproar last year by standing on the American flag in anti-racism demo," March 12, 2016

Email interview with Daveed Gartenstein-Ross, senior fellow at the Foundation for the Defense of Democracies, March 13, 2016