Emma Watson
stated on February 24, 2016 in an interview with Gloria Steinem:
"More lives are lost from violence against women, sex-selective abortion, female infanticide, suicide, egregious maternal mortality, and other sex-linked causes than were lost during all of the wars and civil strife of the 20th century."

Violence against women resulted in more deaths than all the wars and conflicts of the past century combined, according to actress Emma Watson.

As part of her work as an United Nations Women Goodwill ambassador, Watson recently launched a feminist book club, Our Shared Self, and spoke with feminist icon Gloria Steinem in London. Beyond revelations about Watson’s similarity to Hermione, her new hairdo and her research into female sexual pleasure, the Harry Potter star also shared a statistic that "blindsided" her from the book, Sex & World Peace. ("The two things we want, right?" quipped Steinem.)

"There are now 101.3 men to every 100 women on the planet. So women are no longer half of humanity," Watson said on Feb. 24. "I’m quoting the book here but it says, ‘More lives are lost from violence against women, sex-selective abortion, female infanticide, suicide, egregious maternal mortality, and other sex-linked causes than were lost during all of the wars and civil strife of 20th century.’ "

"So from this perspective," she continued, "The greatest security dilemma then is systematic, social devaluation of female life. I’d never come across a statistic like this. I had not understood that we were literally affecting the balance of the population of the world."

That’s a startling statistic, and we wondered if it was grounded in fact.

Looking at the available data, Watson has a point that the devaluation of female life leads to a staggering amount of lost lives. However, it’s not clear that those lost lives are higher than the number of war and conflict deaths in the 20th century. The numbers are comparable, but some estimates find the number of war deaths as slightly higher.

We didn’t hear back from Watson or UN Women, but we did speak with Sex & World Peace’s author, Valerie Hudson, who’s a professor of international affairs at Texas A&M University.

Hudson walked us through how she crunched the numbers and shared a chart from her 2009 study comparing the deaths due to conflict and deaths due to sex-selective causes: 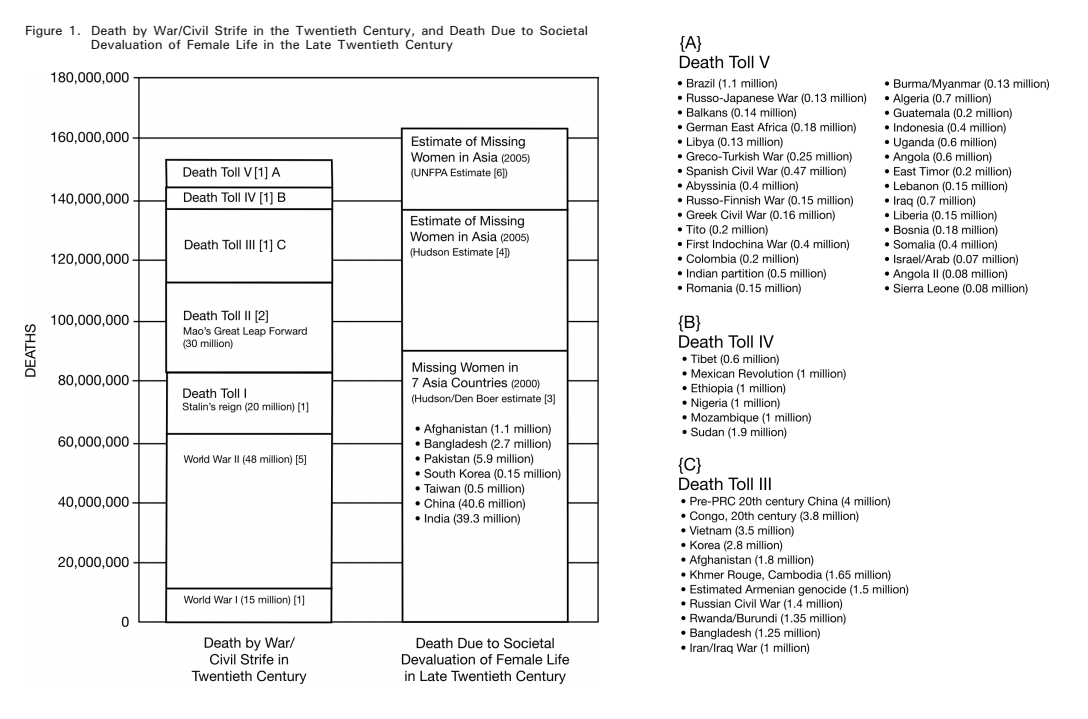 Hudson told us she tallied up the death tolls of 53 wars, conflicts and authoritarian regimes for a total of 152.75 million lives.

She then compared that number to the number of "missing women." This concept, developed by Nobel-winning economist and philosopher Amartya Sen in 1990s, uses abnormal male-to-female ratios to determine how many women would be alive in a specific year or time period if they weren’t aborted, neglected or victims of inequality.

This means that there was a 6.7 percent to 9 percent shortfall in India’s female population, equal to roughly 36 million to 49 million missing women.

But these figures aren’t the only estimates out there.

Let’s state off the bat that there are many difficulties with tallying up both how many women should exist but don’t, as well as how many lives were lost in all of the last century’s civil strife and wars. Any estimate of missing women only works on the assumption that the skewed sex ratio is a result of discrimination. Similarly, while the specific number of casualties in World War I or under Khmer Rouge are reported, estimates for deaths in little-known conflicts like the one between Islamic separatists in the Philippines and the government are murky or nonexistent.

That being said, the estimates we found besides Hudson’s do not show female deaths eclipsing the conflict death of the 20th century. Nonetheless, the numbers for sex-linked deaths are still considerable.

Hudson’s number for conflict deaths (153 million) is a bit low. Most other tallies pin the total death toll somewhere around 200 million:

(*We did not include Rummel’s 169.2 million estimate in calculating the average, because the figure refers only to democides, or government-inflicted deaths, and does not include war casualties or famines associated with regime mismanagement.)

Hudson’s missing women figure, meanwhile, appears to be an outlier when compared to other estimates:

The war on women

Experts we spoke with expressed the toll of gendercide with more tempered, and more accurate, comparisons than Hudson’s and Watson’s.

"The number of missing females is undoubtedly of a larger order than recent demographic catastrophes such as World War II, the Chinese Famine, the HIV-aids epidemics, etc.," said Christophe Guilmoto, a demographer and author of several UN reports on the issue.

"There are more missing women today than died in the two World Wars of the 20th century," said Stephan Klasen, a professor of development economics at the University of Göttingen.

While none of the missing women estimates top the 20th century’s conflict death toll, they’re a "stock measure," which quantifies the impact of gender inequality in survival for generations that are currently alive, according to Klasen.

"(A missing women estimate) does not count those women and girls who died from discrimination decades ago and would have, by now, died from other causes," Klasen said.

If you tallied up all the missing women of the 20th century, "the number would be well over 200 million," said Siwan Anderson, a University of British Columbia professor who specializes in development and gender economics.

Since the 1970s, the number of missing women has risen and is expected to peak in 2035. There are no signs that skewed sex ratios have normalized even as we’ve normalized violence against women, Hudson told us.

Watson said, "More lives are lost from violence against women, sex-selective abortion, female infanticide, suicide, egregious maternal mortality, and other sex-linked causes than were lost during all of the wars and civil strife of 20th century."

The claim comes from the book Sex and World Peace by Valerie Hudson, who was citing a UN figure of 163 million missing women in 2005. That’s 10 million more than her estimate of lives lost in all of last century’s strife, 153 million.

But this is using a high estimate for the first measure and a low estimate for the second. The number of sex-related deaths, which varies from year to year, typically falls within 100 million to 130 million range. The number of deaths due to war, according to most other estimates, is about 200 million. Both numbers are disturbingly high, but it’s not clear that one is definitively higher than the other.

With this caveat, we rate Watson’s claim Half True. 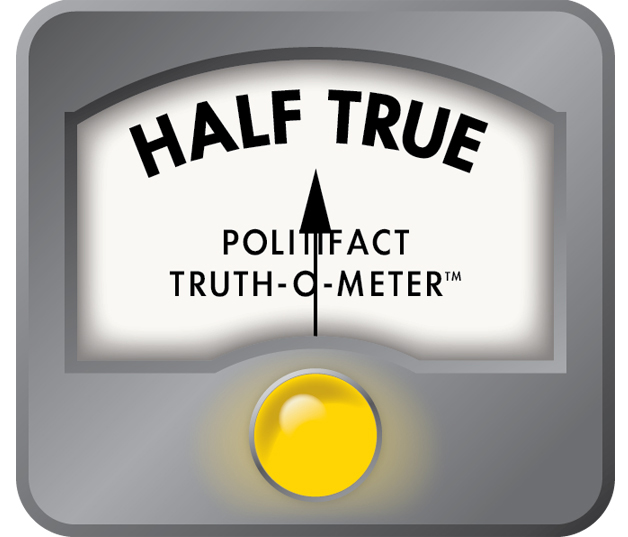 "More lives are lost from violence against women, sex-selective abortion, female infanticide, suicide, egregious maternal mortality, and other sex-linked causes than were lost during all of the wars and civil strife of the 20th century."

Zbigniew Brzezinski, Out of Control: Global Turmoil on the Eve of the 21st Century, 2010

Milton Leitenberg, "Deaths in Wars and Conflicts in the 20th Century," 2006

Law and Contemporary Problems, "SEARCHING FOR PEACE AND ACHIEVING JUSTICE: THE NEED FOR ACCOUNTABILITY," 1997

Population and Development Review, "A Turning Point in Gender Bias in Mortality?," 2001

Email interview with Stephan Klasen, professor of development economics at the University of Göttingen, March 9, 2016

Email interview with Siwan Anderson, professor of economics at the University of British Columbia, March 9, 2016

Siwan Anderson and Debraj Ray, "The Age Distribution of Missing Women in India," 2012