It's been a long campaign season. At PolitiFact, we've fact-checked Donald Trump and Hillary Clinton a combined 509 times since they announced their campaigns for president.

If you add in the other presidential candidates -- from Lincoln Chafee to Ben Carson to Jill Stein -- the number shoots to 889.

So please allow this last fact-check of the 2016 campaign to be a little different.

As Trump made his closing argument in Raleigh, N.C., Nov. 7, he decided to spend a few seconds telling voters that he's a bigger draw than Beyonce and Jay-Z.

NOW: Trump: "Jay-Z and Beyonce, I like them, but I get bigger crowds than they do!" https://t.co/CVBZ2Af4zC pic.twitter.com/nlFeFIrvib

Here’s a photo from that Mobile rally: 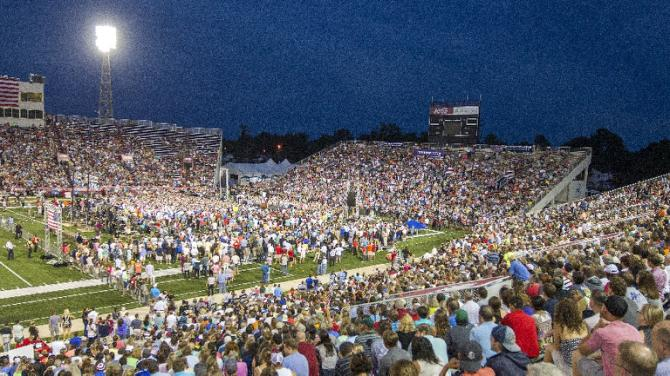 Anyway, if you take Trump as his word, that’s an average of 27,000 for those three big rallies.

That’s a good draw. But it’s not Jay Z/Beyonce level.

Jay Z last toured in 2014 with Beyonce to promote her self-titled album and his Magna Carta Holy Grail. The couple played 16 shows across North America, and one in Paris, raking in over $100 million in ticket sales. All were sold out and averaged a crowd size of 45,700 per night, according to data assembled by Billboard. The biggest one-night performance drew a crowd of nearly 53,000 while their two-night Paris show topped 147,000.

Here’s a photo from their Seattle show, via Wikimedia Commons

Beyonce, who wrapped up her $210 million Formation tour in October, performed 49 sold-out shows across North America and Europe. She drew an average crowd of 45,423 per night and a record one-night crowd of 75,106 in Paris this July.

Beyonce and Jay Z campaigned with Clinton Friday in Cleveland at an event that drew about 10,000 people, according to estimates. That's comparable to the size of many Trump crowds but certainly smaller than some of Trump's bigger crowds.

To fully vet this bizarre claim, it’s worth noting that Trump’s rallies are free. Tickets to Beyonce in the swing state of Florida cost $40-$275 this year. Based on the latest Billboard numbers, Trump draws crowds similar to Phish.

There is no question Trump is fixated on the size of his crowds.

And there is no question, this claim -- as it relates to Beyonce and Jay Z -- is incorrect.

Billboard, Current Boxscore, archived snapshots from May to November 2016