Donald Trump
stated on November 4, 2016 in a rally in Atkinson, N.H.:
"Nearly one in four people in their prime working years are not working."

During the 2016 presidential campaign, Donald Trump has gotten some things about the labor market very wrong, notably suggesting that the unemployment rate may be 42 percent. (It’s not; that got a Pants on Fire.)

But at a Nov. 4 rally in Atkinson, N.H., Trump offered a statistic that was much closer to the mark. "At the core of my contract is my plan to bring back our jobs, about time," he said, later adding that "nearly one in four people in their prime working years are not working. They want to work. They're not working."

When we checked with several economists, they said the most commonly used age span for defining the "prime working years" is 25 to 54. So we looked at the "employment-to-population ratio" for ages 25 to 54 -- that is, the percentage of people in that age range who are working, divided by the total number of people in that age range. (We also spot-checked the data for 18 to 64 and for 25 to 64 and did not find significant differences from 25 to 54.)

That said, we’ll try to put this number in some historical context. Here’s a chart for this statistic that goes back to 1948. The chart shows the percentage of people working. 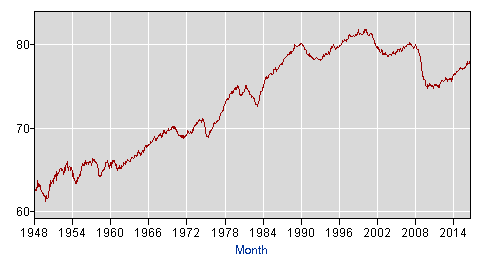 First, simply citing this figure ignores that the percentage of people in this age range who are working has risen steadily during President Barack Obama’s presidency. The chart below shows that this ratio has risen by 3.4 percentage points since its most recent low point during the Obama presidency -- 74.8 percent in November 2010. So just citing the number ignores that the figure has been going in the right direction for the past six years.

Second, it’s worth noting that the current ratio is not all that far from its all-time high -- 81.9 percent in April 2000. Prime working age happens to be the prime childbearing and child-rearing age, and it makes sense that some people will choose not to work during at least some of those years. So it’s not as if this number has always been pushing 100 percent and now is suddenly down dramatically.

On the other hand, economists say that Trump has put his finger on a legitimate concern about the current labor market -- that the employment rate among prime-working-age Americans has not recovered to its level prior to the Great Recession.

Despite more than six years of steady job growth, the employment-to-population ratio for those 25 to 54 has not yet returned to its immediate pre-Great Recession peak of 80.3 in January 2007. Today, it’s still 2.1 percentage points below that peak. And every single month but two of President George W. Bush’s two terms in office had a higher percentage than today’s, even though Bush took office during an economic downturn, albeit a milder one.

The trend line for men has been particularly problematic. As the following chart shows, the employment ratio for men in this age range was almost always above 90 percent prior to 1980, and in the immediate pre-Great Recession period, it was in the 87 percent range. Under Obama, it has rebounded from a low of 80.6 percent, but it was still only at 85 percent in October 2016 -- lower than its pre-recession level. 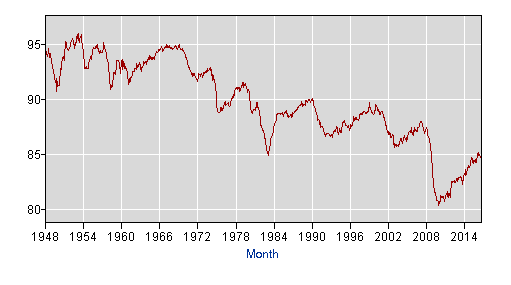 In other words, we may be looking at a new, lower normal for prime-working-age employment, particularly for men -- and unlike some other employment statistics, this is one that is not shaped by an ongoing surge of baby boomer retirements.

Trump said that "nearly one in four people in their prime working years are not working." The actual percentage is 21.8 percent, so Trump’s phrasing is reasonable. Putting it this way does ignore that this number has declined steadily under Obama for the past six years, and it also ignores that it’s not that far from the all-time low. Still, economists agree that Trump is raising a legitimate concern, since even after six years of improvement, the percentage today remains worse than it was prior to the Great Recession, suggesting that it might represent a new, more worrisome "normal." We rate his claim Mostly True.