Dana Young
stated on October 20, 2016 in a mailer:
Says she "voted for a statewide fracking ban."

Rep. Dana Young, R- Tampa, shows a copy of her gaming bill to members of the media.

In an attempt to position herself as a more environmentally-friendly candidate, state Rep. Dana Young, R-Tampa, has sent mailers touting her vote for a recent bill targeting fracking.

The effects of the legislation Young voted for are not as clear cut as the claim Young makes.

A third-party group supporting Young, who is facing Democrat Bob Buesing for state Senate in the newly created District 18, sent the mailer in the last weeks of September that says she "voted for a statewide fracking ban to protect our water." The group, the Florida Republican Senatorial Campaign Committee, paid for the mailpiece, but the mailer says that Young approved the message. So we are putting Young on the Truth-O-Meter. 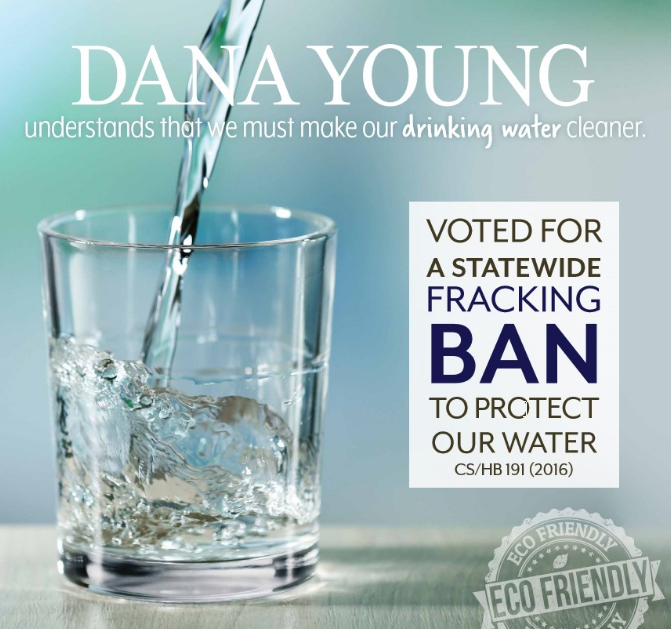 The mailer refers to Young’s vote on House Bill 191, legislation aimed at regulating fracking in Florida. We were curious about the Young’s statement and the specifics of the measure. As we looked further into the bill, we found the mailer is somewhat misleading. What Young voted for would have regulated fracking, but it wouldn’t have permanently banned it.

A closer look at House Bill 191

HB 191, dubbed "Regulation of Oil and Gas Resources," was sponsored by Rep. Ray Rodrigues, R-Estero, and passed 73 to 45 on Jan. 27 in the Florida House. Young voted in favor of this bill, along with 72 other Republicans, while 38 Democrats and 7 Republicans opposed the bill.

Young reasoned that HB 191 could have been the first step to a permanent ban on fracking. However, the bill only called for a temporary moratorium on the process, not a "ban" like her mailer says.

Had the bill passed (it was defeated in a Florida Senate committee), the measure would have allowed Florida to regulate fracking — a process that involves pumping large amounts of water, sand and chemicals into the ground to harness oil and gas reserves.

Per the bill, fracking permits would not have been issued until a study was completed in 2017 by the Florida Department of Environmental Protection. The DEP would have proposed rules based on the study’s results, which would have been subject to approval of the Legislature.

Point being, the bill was never intended to ban fracking permanently, but place a moratorium on the practice while its effects were studied.

Democrats also took issue with the fact the bill would have prohibited Florida's counties and cities from passing local bans against fracking. According to the Miami Herald, 41 cities and 27 counties oppose fracking. St. Petersburg has passed a resolution against hydraulic fracturing, along with Broward County, which outlawed fracking in January.

In addition, there were several amendments to HB191 offered up by Democrats that would have created more safeguards against fracking, including a restriction on what chemicals can be used and studies on prenatal health, but they didn’t pass.

Young voted against some of these, but her spokesperson said those issues were unnecessary, trusting the DEP study would have addressed those concerns.

Young’s office said she strongly opposes fracking in Florida and will continue to seek a statewide ban.

A mailer from Young says she "voted for a statewide ban on fracking."

That vote is in reference to HB 191, which would have set up a temporary moratorium on fracking in anticipation of future regulations. The bill would have authorized a study on which to base further regulation. It was not an outright ban on fracking.

Young’s claim is partially accurate but is missing context that would give the reader a different impression. For that reason, we rate Young’s statement Half True.

Correction: A previous version of this fact-check incorrectly reported who sent the mailer. The piece has been updated to reflect that it was sent by an outside committee with Young's approval.

The Florida Senate, "CS/HB 191: Regulation of Oil and Gas Resources"