Donald Trump
stated on April 4, 2017 in a CEO town hall:
"When you look for a job, you can't find it and you give up. You are now considered statistically employed."

At a town hall with CEOs, President Donald Trump revived some of his longstanding concerns about how the nation’s unemployment statistics are calculated.

Appearing to reference the number of Americans out of work, Trump said, "We have 100 million people if you look. You know, the real number's not 4.6 percent (for the unemployment rate). They told me I had 4.6 percent last month. I'm doing great. I said yeah, but what about the hundred million people? A lot of those people came out and voted for me. I call them the forgotten man, the forgotten woman. But a lot of those people -- a good percentage of them would like to have jobs and they don't. You know, one of the statistics that, to me, is just ridiculous -- so, the 4.6 sounds good. But when you look for a job, you can't find it and you give up. You are now considered statistically employed. But I don't consider those people employed."

Is Trump right that "when you look for a job, you can't find it and you give up. You are now considered statistically employed"? Not at all.

Trump seems to suggest that government statisticians are performing something like medieval alchemy, turning lead (unemployment) into gold (employment) with the flick of a wand.

That’s not the case. Broadly speaking, if someone is already considered unemployed and they give up looking for a job, they would be counted as "not in the labor force" -- not as "employed."

In fact, there is an official statistical category for a person in this situation. If someone wants and looks for a job but then gives up, they are called "discouraged workers." Specifically, these people "want and are available for a job and who have looked for work sometime in the past 12 months" but are "not currently looking because they believe there are no jobs available or there are none for which they would qualify."

The problem for Trump is that "discouraged workers" are relatively rare -- in the most recent month, there were 522,000 of them. That’s just one-fourteenth the number of unemployed workers, and only about one-half of 1 percent of the "out of work" Americans Trump seems to have been referring to.

Speaking of which, as we have noted previously, Trump’s 100-million figure of "out of work" Americans is highly misleading.

This number -- in reality, a bit lower at 94 million -- includes any American age 16 and over who isn’t institutionalized and who isn’t either working or actively looking for work. This means the figure includes retirees, high school students over 16, undergraduate and graduate students, stay-at-home parents, disabled people, adults who are engaged in full-time education or training, and even trust-fund kids and those wealthy enough to be living off investments.

In other words, the figure includes a lot of people who wouldn’t be expected to be working, or who are engaged in other pursuits. We have previously estimated that no more than a quarter of the 94 million people not in the labor market are either out of work, looking for a job, or eager to get back in the job hunt if labor-market conditions were to improve.

Here's a chart from the jobs site Indeed.com showing one analysis of the reasons that prime-working-age Americans may not be working. 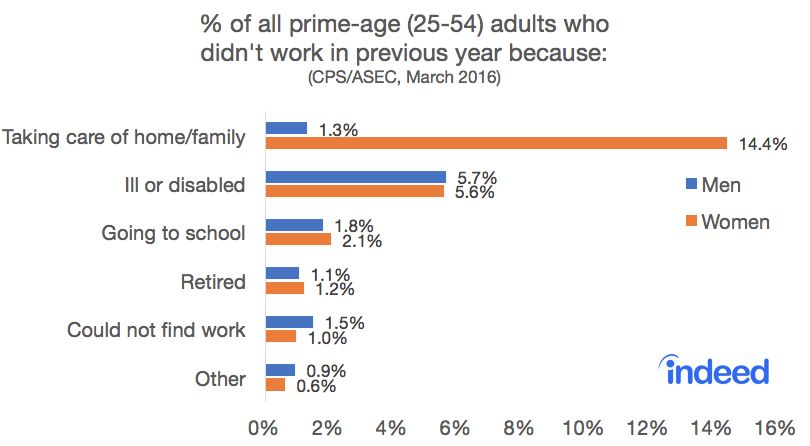 So suggesting that roughly 100 million Americans are out of work ropes in many people who, in fact, have no desire to find paid employment.

Trump said, "When you look for a job, you can't find it and you give up. You are now considered statistically employed." That’s flat wrong -- someone who stops looking for work would be shifted to the "out of the labor force" category, not the "employed category." We rate the statement False.

Politifact Rating:
False
"When you look for a job, you can't find it and you give up. You are now considered statistically employed."
Donald Trump
President