Antonio Villaraigosa
stated on July 31, 2017 in an interview on MSNBC:
"Undocumented immigrants commit less crimes than the native born."

Iker Velasquez, 4, who came from Honduras with his parents, holds a U.S. flag as he listens while Rep. Luis Gutierrez, D-Ill., speaks to the media with children and families from Central America. AP Photo/Jacquelyn Martin

Candidate for California governor Antonio Villaraigosa jumped into the nation’s heated debate on immigration reform during a recent interview on MSNBC.

The Democrat and former Los Angeles mayor rejected the idea that deporting undocumented immigrants was a sound strategy for reducing crime.

His statement followed President Trump’s speech about combatting MS-13 gang members. The gang started in poor Los Angeles neighborhoods where many refugees from civil wars in El Salvador, Guatemala and Nicaragua lived in the 1980s. It’s grown into an international criminal organization with more than 30,000.

Trump campaigned on the promise to deport millions of undocumented residents, often describing them as threats to public safety.

"I think we all agree that people that commit violent crimes ought to be deported. But going after the undocumented is not a crime strategy, when you look at the fact that the National Academy of Sciences in, I think it was November of 2015, the undocumented immigrants commit less crimes than the native born. That’s just a fact." 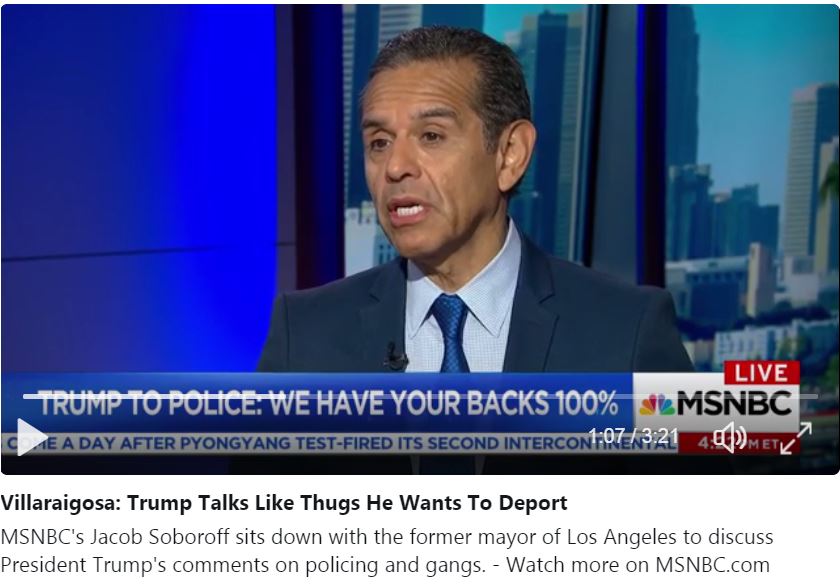 We decided to examine this last point as part of our Tracking The Truth series, which fact-checks claims in the 2018 California governor's race.

We interpreted Villaraigosa’s statement to mean undocumented people commit crimes at a lower rate than the native born.

But we wondered whether this was really a settled matter.

We started by checking out the 2015 National Academy of Sciences study Villaraigosa cited. It found: "Immigrants are in fact much less likely to commit crime than natives, and the presence of large numbers of immigrants seems to lower crime rates." The study added that "This disparity also holds for young men most likely to be undocumented immigrants: Mexican, Salvadoran, and Guatemalan men."

It continued: "Today, the belief that immigrants are more likely to commit crimes is perpetuated by ‘issue entrepreneurs’ who promote the immigrant-crime connection in order to drive restrictionist immigration policy."

The academy is a nonprofit research organization charged with providing independent advice to the nation. It is funded largely by the federal government.

The Cato study used information from the U.S. Census Bureau's American Community Survey for immigrants aged 18 to 54 who are incarcerated in the United States.

To examine Villaraigosa's claim, we also relied on research into similar claims by our partner national PolitiFact. In July 2016, it rated Mostly True a statement by Libertarian candidate for president Gary Johnson that Mexican immigrants "are more law-abiding than U.S. citizens and that is a statistic."

PolitiFact found several studies that back up this claim by citing incarceration rates. It also found groups that challenged those studies or said more research is needed.

PolitiFact pointed to a July 2015 report by the American Immigration Council, a pro-immigrant nonprofit in Washington. The council analyzed data from the Census’ 2010 American Community Survey and found that about 1.6 percent of all immigrant males (Census does not specify legal status) between 18 and 39 years old were incarcerated, compared to 3.3 percent of the native-born population.

Looking at California prisons, immigrants are also underrepresented. U.S.-born men are incarcerated in the state at a rate of more than two-and-a-half times greater than that of foreign-born men, according to a study by the Public Policy Institute of California.

The American Immigration Council also reported that 2010 Census data shows incarceration rates of young, less educated Mexican, Salvadoran and Guatemalan men — which comprise the bulk of the unauthorized population — are "significantly lower" than incarceration rates of native-born young men without a high-school diploma.

Specifically for Mexican men ages 18 to 39, the incarceration rate in 2010 was 2.8 percent, compared to 10.7 percent for native-born men in the same age group, the council’s report said.

"They are very motivated to not blow that opportunity by getting in trouble with the police," he told PolitiFact. "This is especially so for unauthorized immigrants, who can be deported at any time for unlawful presence."

PolitiFact also noted that as the immigrant population has increased, crime has gone down, citing Ewing’s report.

Between 1990 and 2013, the foreign-born share of the U.S. population increased from 7.9 percent to 13.1 percent, and the number of unauthorized immigrants went up from 3.5 million to 11.2 million. At the same time, the violent crime rate (murder, rape and aggravated assault) decreased 48 percent and property crime rate fell 41 percent, the report said, citing FBI data.

Bianca E. Bersani, an assistant professor and director of the Criminology and Criminal Justice Program at the University of Massachusetts in Boston, says her research also shows that crime involvement among foreign-born residents is lower than that of U.S.-born citizens.

"The rhetoric of the ‘criminal immigrant’ does not align with the bulk of empirical research," Bersani said.

According to Bersani’s research, while first-generation immigrants are less likely to commit crimes than the native-born population, the second generation (individuals born in the United States to at least one foreign-born parent) more closely resemble patterns of their native-born peers (three or more U.S.-born generations).

"This does not suggest that the second generation is uniquely crime prone, but instead that they are acting in ways that are no different from the rest of the U.S.-born population," Bersani said.

Datasets with information on both crime and immigrant status are rare, Bersani said, though more research and data are becoming available.

The Center for Immigration Studies, which supports stricter immigration policies, in a 2009 study said that overall understanding of immigrants and crime "remains confused" due to lack of data and contrary information.

As PolitiFact reported in 2015, there isn’t exact data on how many undocumented immigrants are currently incarcerated.

PolitiFact California spoke about this critique with Ewing of the American Immigration Council, whose research supports Villaraigosa’s claim. He said he’s confident in the work that’s been done and said critics have used anecdotes, rather than full-blown research, to try to make their points.

Ewing added that the studies backing up Villaraigosa’s statement are "from such a wide range of researchers using so many different methodologies and sources of data -- not everyone can be wrong."

He cited a 2015 study by the National Academy of Sciences that backs up this claim.

In a fact check last year, PolitiFact rated a similar claim Mostly True. It cited additional studies by scholars and partisan groups that show that the foreign-born population is less likely to commit crimes than the native-born.

It also found that researchers agree more data is needed to get a better understanding of immigration and crime. It said this was a needed clarification.

PolitiFact California agrees with these findings.

UPDATE: We have added information to the ‘Our research’ section of this fact check from a March 2017 study by the libertarian Cato Institute. The study’s findings provide additional evidence backing up Villaraigosa’s claim that undocumented immigrants are less likely to commit crimes than the native born.

Walter A. Ewing, a senior researcher at the American Immigration Council, interview, Aug. 3, 2017

The Pew Research Center: "Crime rises among second-generation immigrants as they assimilate," October 15, 2013

National Bureau of Economic Research, "Why are immigrants’ incarceration rates so low? Evidence on selective immigration, deterrence, and deportation," July 2007

The Hill, "DOJ releases data on incarceration rates of illegal immigrants," May 2, 2017

PolitiFact, "Trump immigration claim has no data to back it up," July 6, 2015

National Academies of Sciences, Engineering, and Medicine, "The Integration of Immigrants into American Society," 2015