Donald Trump
stated on August 9, 2017 in a tweet:
"My first order as president was to renovate and modernize our nuclear arsenal. It is now far stronger and more powerful than ever before."

One day after threatening North Korea with "fire and fury like the world has never seen" if it menaces the United States, President Donald Trump tweeted about the strength of U.S. nuclear weapons and improvements made on his watch.

Trump wrote at 4:56 a.m: "My first order as president was to renovate and modernize our nuclear arsenal. It is now far stronger and more powerful than ever before."

My first order as President was to renovate and modernize our nuclear arsenal. It is now far stronger and more powerful than ever before....

A week after taking office, Trump issued a presidential memorandum on "rebuilding the U.S. Armed Forces."

One sentence in this memo directs the defense secretary to "initiate a new Nuclear Posture Review to ensure that the United States nuclear deterrent is modern, robust, flexible, resilient, ready, and appropriately tailored to deter 21st-century threats and reassure our allies." The review effort kicked off in April 2017, according to news reports.

However, this wasn’t Trump’s first order as president — more than a dozen earlier executive orders and memoranda are listed on the White House website.

Indeed, it’s common for new presidents to put their stamp on the nation’s nuclear capabilities by issuing a new review within two years after entering office.

Bill Clinton produced one in 1994. George W. Bush produced one in 2002. And Barack Obama produced one in 2010. (Apparently, the Trump administration hasn’t updated its Pentagon web page on the Nuclear Posture Review. When we accessed it on Aug. 9, it still had a photo and "notable quote" by Hillary Clinton on it.)

A larger issue with Trump’s assurance: Experts unanimously said the U.S. nuclear arsenal could not have improved to the extent Trump described in just over 200 days.

There have been incremental improvements, but they have been trickling out under a plan begun under Trump’s predecessor, Obama.

The United States is engaged in a multiyear program to modernize the nation’s nuclear arsenal, including the rebuilding of the Minuteman III system, which launches intercontinental ballistic missiles, and the Trident II submarine-launched missile systems, as well as the refurbishment of nuclear warheads and construction of new and upgraded facilities, such as a uranium processing facility in Oak Ridge, Tenn. (Here’s an updated rundown of the modernization plan published by the Arms Control Association.)

The modernization effort was estimated to cost roughly $35 billion a year over a decade, or 5 percent to 6 percent of planned national defense spending, according to Congressional Budget Office reports released in December 2013 and January 2015. Its most recent estimate, released in February 2017, CBO said the modernization effort would cost $400 billion between 2017 and 2026, or $52 billion more than CBO’s 2015 estimate, "largely because modernization programs will be ramping up." Cumulatively, total costs could reach $1 trillion over the next 30 years. 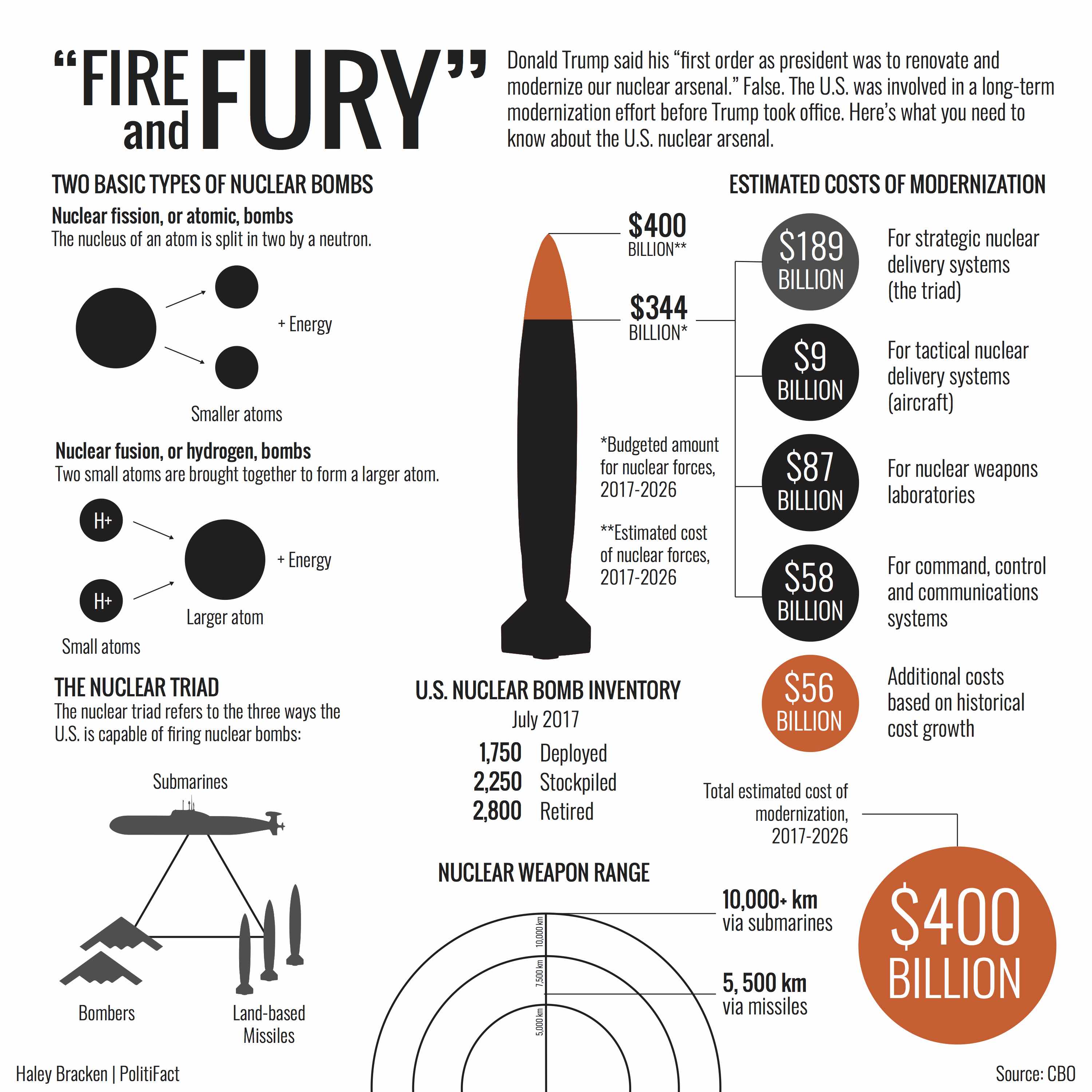 "It would be a pretty fantastic claim under even Cold War standards given the size and scope of the arsenal," said Richard Nephew, a senior research scholar at Columbia University's Center on Global Energy Policy and a former State Department official under Obama. But given the restrictions under the New START treaty that went into force in 2011, it would be "pretty difficult, if not impossible, to achieve except in a crash, well-publicized effort."

"There is a total of nothing that has changed substantially about the U.S. nuclear arsenal over the few months that Trump has been in office," Bunn said. "We have the same missiles and bombers, with the same nuclear weapons, that we had before."

Bottom line: In the scale of decades, six months is a blink of the eye, experts said.

This is not the first time Trump has sought to paint a picture of weak stewardship of the U.S. nuclear arsenal under Obama. As early as June 2015, Trump said, "Even our nuclear arsenal doesn't work. It came out recently they have equipment that is 30 years old. They don't know if it worked." We rated that False.

Trump said, "My first order as president was to renovate and modernize our nuclear arsenal. It is now far stronger and more powerful than ever before."

What Trump did shortly after taking office was neither his first order nor a unique action; every new president in recent years has requested a Nuclear Posture Review. In addition, the ongoing nuclear modernization plan -- which dates back to the Obama administration and will take decades to complete -- would not have notched achievements in six months sufficient to be characterized as "far stronger and more powerful than ever before."

PolitiFact Rating:
False
"My first order as president was to renovate and modernize our nuclear arsenal. It is now far stronger and more powerful than ever before."
Donald Trump
President