Jake Tapper
stated on August 23, 2017 in comments on Twitter:
Says the Joker's "Red Hood" origin story is "the true one."

For Batman fans, the history of the Joker is no laughing matter.

A report that said Warner Bros. is working on a spinoff featuring the origins of the arch-villain led to a Twitter tussle between DailyWire.com editor Ben Shapiro and CNN’s Jake Tapper.

On Aug. 23, 2017, Shapiro tweeted his dismay at the news that Warner Bros. may feature a young version of the Joker, with a gritty, 1980s-style backdrop similar to potential producer Martin Scorsese’s well-known crime dramas.

"The whole point of the Joker is that he has no set origin story," Shapiro said, including a link about the potential film.

Tapper included a page from Detective Comics No. 168, which was released in 1951.

Not true, you obviously never heard of the RED HOOD. pic.twitter.com/Azf5AEHyPo

The page shows the Joker telling Batman how he once had been a laboratory worker who attempted to steal $1 million from the Monarch Playing Card Company. He made his escape by swimming through chemical waste, which turned his skin white and his hair green. He took his name from the eponymous playing card and has been arching Batman ever since.

But something sounded off to this fact-checker, who thought Shapiro had a point about the Joker’s past being mysterious. PolitiFact has written about whether there’s been a female Thor, and whether Wonder Woman’s Gal Gadot or Man of Steel’s Henry Cavill is paid more money, so we have some experience.

In true geek fashion, we raised this objection with Tapper, saying that the Red Hood origin story was just the one with which people were most familiar.

"Because it's the true one," Tapper replied.

Because it's the true one

We’ll see about that.

The most succinct reply to this came from Nick Valente, a publicist for DC Comics.

"You are correct, there is no definitive backstory for the Joker," he said.

But wait! Like most comic book plotlines, there’s always room for this story to expand and change.

The Joker has been around almost as long as Batman himself, first appearing in 1940s Batman No. 1, when the Dark Knight got his own title after starting in Detective Comics a year earlier.

There have been several iterations of the character, but through the decades he has been portrayed largely as a psychotic killer, bent on antagonizing Batman and the people of Gotham City.

The Joker had no backstory to speak of until 1951, when the anecdote about the Red Hood that Tapper cited was printed. Versions of this origin have appeared in various forms over the years, with details changed.

Glen Weldon, author of The Caped Crusade: Batman and the Rise of Nerd Culture‎, said that DC gave the character an origin story, but that was "back in the halcyon days before a ravenous fanbase insisted that every random story must calcify into canonical truth."

One of the most famous modern versions of the Red Hood story is Alan Moore’s account in 1988’s The Killing Joke, in which the Joker is a former engineer and failed comedian who leads armed robbers into his former employer, Ace Chemical Processing, Inc., after the death of his pregnant wife. He wears the Red Hood as a disguise and jumps into the chemicals to flee Batman. 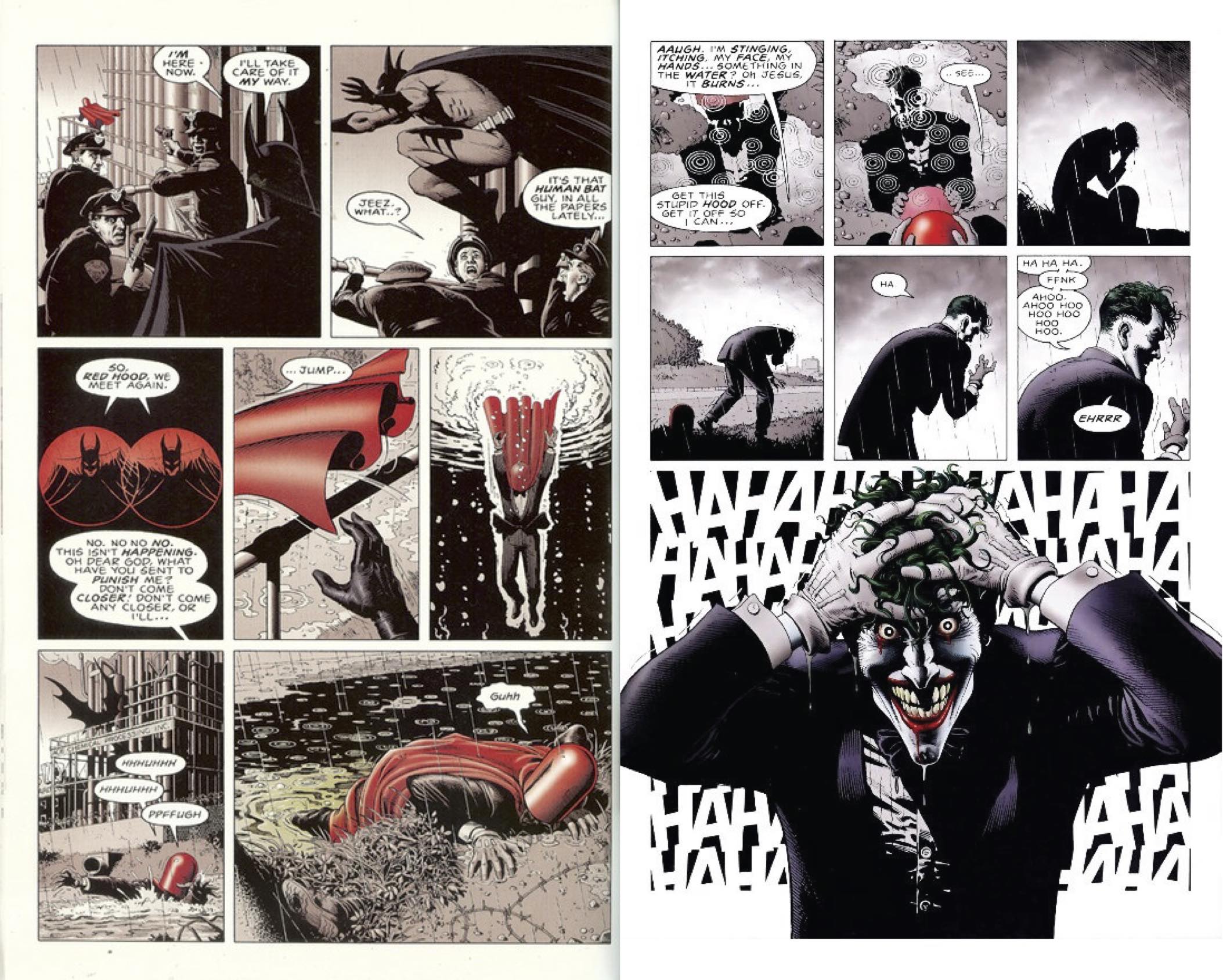 But that doesn’t mean we should believe the Joker, because, well, he’s the Joker. He’s an unreliable narrator, because his insanity keeps him from telling the truth, and us from knowing the difference.

Even Moore’s version of the Joker acknowledged that his story is essentially unknowable.

"Sometimes I remember it one way, sometimes another," the Joker said. "If I’m going to have a past, I prefer it to be multiple choice!"

"Since that (1951) story was first published, just about every time any comic's made even the most casual reference to Joker's origin, the Red Hood bit has come and gone, but the ‘fall into a vat of acid, goes nuts’ thing remains," Weldon said.

In the 1989 film version of Batman, Jack Nicholson’s Joker is a lifelong criminal named Jack Napier (the only time the Joker is given a first and last name) who actually is the man who killed Bruce Wayne’s parents. The late Heath Ledger’s acclaimed 2008 take on the Joker in The Dark Knight gives a nod to the ambiguity of it all, with the grease-painted antagonist telling different characters more than one version of how he was disfigured. (There’s also an offshoot movie based on Jared Leto’s tattooed Joker and Harley Quinn from 2016’s Suicide Squad coming, but that’s a different set of issues altogether.)

DC Comics recognizes that their most famous villain juggles the truth. Their Origin of the Joker showed the killer acknowledging that even he gets confused by which story is right. 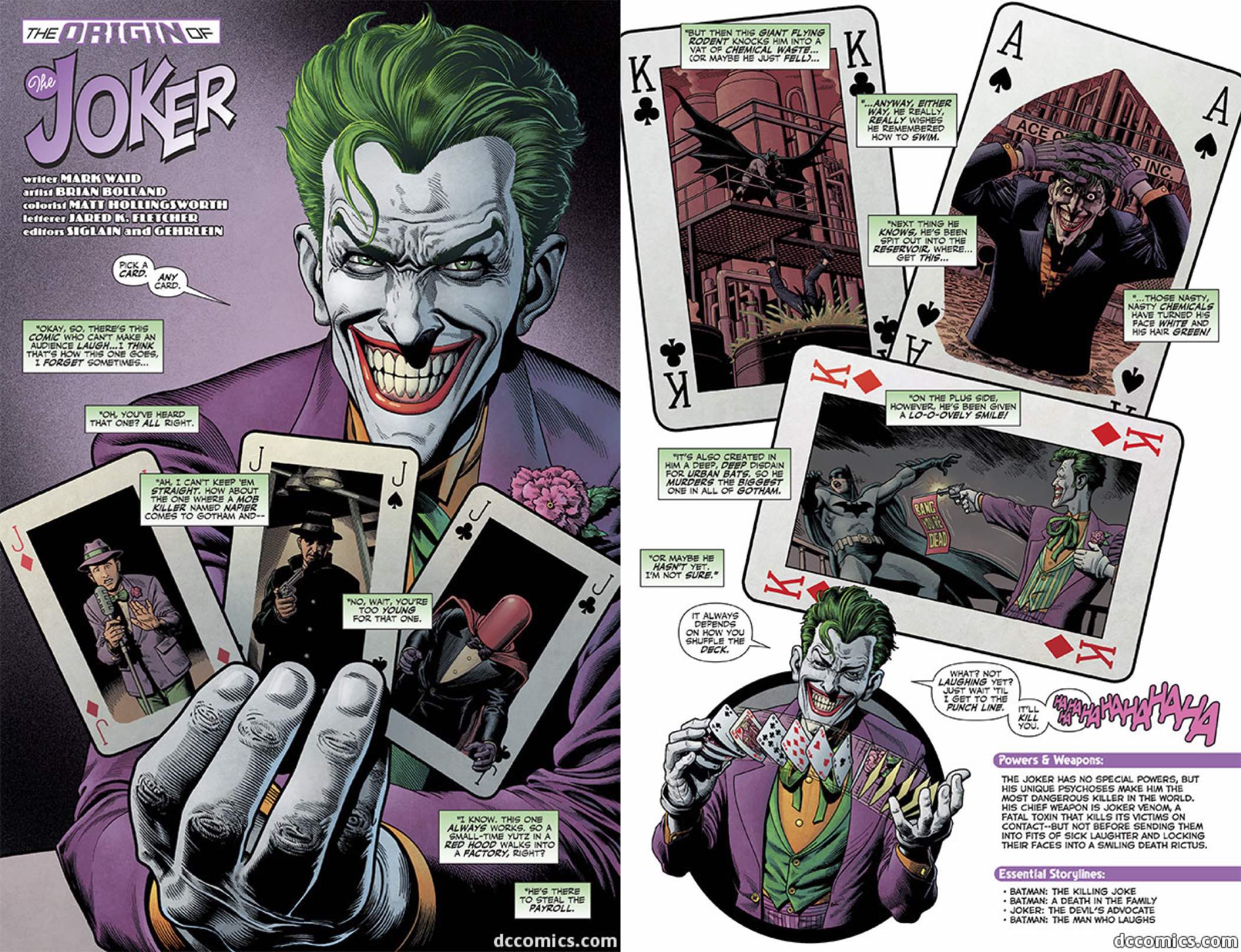 "Though the Red Hood story — in its blurriest form of spills and chemical burns — is perhaps the most-pointed to origin story for the Joker, it is by no means the definitive one," said Brad Ricca, SAGES Fellow at Case Western Reserve University and a comics historian.

Recent comic book storylines have suggested that Batman has actually matched wits with three different Jokers through the years. Other stories hint further that the Joker may be immortal. The character has cycled through several personalities and backstories, sometimes insane and sometimes not, but always a dark-humored and lethal opponent for Batman. That’s the strength of comic books, which are free to retroactively change the continuity however the creators see fit, our experts said.

Will Brooker, a film and cultural studies professor at Kingston University, said that the most sinister aspect of the character is that inability to define how he became the way he is.

"My feeling is that to pin Joker down to a fixed backstory and identity is reductive, unimaginative and suggests a lack of understanding of what Joker is really about," said Brooker, author of Batman Unmasked: Analyzing a Cultural Icon.

"He is essentially the opposite of Batman, who has a fixed, definite origin. The whole point is that Batman can never work out who Joker is and where he came from."

Tapper said the Joker's "Red Hood" origin story is "the true one."

That's right, we're fact-checking where the Joker came from. So sue us!

This claim is throwing down the gauntlet for comic book nerds, pointing to a 1951 backstory about the Joker wearing a disguise and swimming through chemical waste as the one, true origin of the archvillain. He may prefer that version, and that’s fine, because it’s not wrong. But comic historians and even a DC Comics publicist we consulted agreed that the Joker has no definitive backstory — indeed, that is one of the defining strengths of the character.

Fast Company, "Who Really Created Batman? A DC Comics Historian Weighs In On The Controversy," July 21, 2014

Interview with Glen Weldon, author of The Caped Crusade: Batman and the Rise of Nerd Culture‎, Aug. 24, 2017