Donald Trump
stated on February 16, 2017 in a news conference:
The media has "a lower approval rate than Congress."

In a wide-ranging news conference, President Donald Trump said a few nice things about the media and quite a few not-so-nice things. While he acknowledged that there are good reporters, his opening salvo was strongly critical.

"You have a lower approval rate than Congress, I think that's right, I don't know," Trump said. "I think they have lower -- I heard lower than Congress."

Trump gave himself some wiggle room on the accuracy of that, but he still made the point. To set the record straight: The press does rank low in the trust department, but Congress ranks even lower.

The latest numbers come from Gallup, which has been asking people how much confidence they have in various institutions since 1973. As of June 2016, 40 percent of the public had a negative opinion of television news, but 55 percent weighed in on the negative side for Congress. Newspapers did a hair better in the mistrust department. About a third of the people surveyed said they had very little or no trust in the printed press.

Looking at the numbers in net terms (positive minus negative), newspapers and television have an average net rating of minus 18 percent. But Congress’ net is minus 44 percent.

Other surveys might have different numbers, but the thrust remains the same. Hefty fractions of the public might have a bad feeling about the news media, but they feel even worse about Congress.

A 2016 Pew Research Center survey asked people if they trusted what they heard from national news organizations and 24 percent said "not too much" or "not at all." A 2015 survey found that 69 percent viewed Congress unfavorably.

The Associated Press and the NORC Center for Public Affairs Research polled the public in 2014. They reported that "over half of Americans say they have hardly any confidence at all in Congress." The comparable measure for the press was 44 percent. Again, trust in news media might be low, but Congress comes in lower.

It’s worth noting how low both institutions score in this chart about public confidence from Gallup: 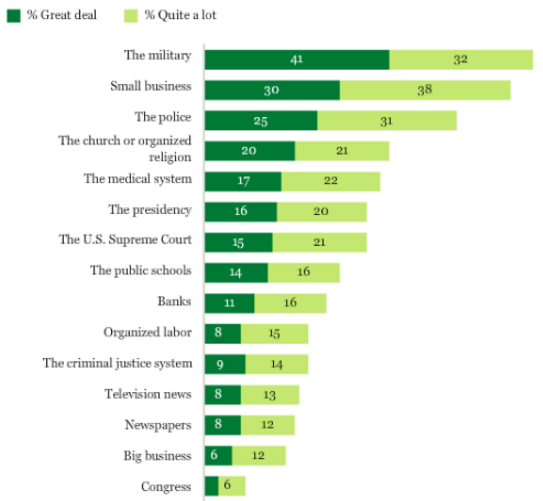 Trump said he thought that the media had lower favorability ratings than Congress. But Congress actually ranks below the news media, according to surveys from three different research groups spanning several years. In two polls, mistrust in the media broke 40 percent, which is hardly anything to brag about. But in those studies, mistrust in Congress was over 50 percent.

Trump had a point that the media has a trust issue, but he got the ranking wrong in terms of Congress.