Mitch McConnell
stated on January 9, 2017 in an op-ed on FoxNews.com:
"About 8 out of 10 favor changing Obamacare significantly or replacing it altogether."

"By nearly any measure, Obamacare has failed: It didn’t lower costs, it didn’t increase choice, middle-class families continue to lose health plans they were promised they could keep, and Americans continue to call for Obamacare’s repeal," McConnell wrote on Jan. 9. "They spoke loudly again this November, and about 8 out of 10 favor changing Obamacare significantly or replacing it altogether."

"That doesn’t mean the law will end overnight," he continued. "There will be a stable transition period, and once repeal is passed we will turn to replacement policies that cost less and work better than what we have now."

What caught our eye in this passage was McConnell’s citation of the eight of 10 figure. When we took a closer look, we found a credible source for it, but also some missing context.

McConnell’s office pointed to a Nov. 28, 2016, news release by Gallup that summarized one of its periodic polls on health care. The headline was, "Most Americans Want Changes to Affordable Care Act."

Gallup’s release goes on to say, "Whatever the exact course of action that ensues once Trump and the new Congress take office, it is clear that about eight in 10 Americans favor changing the ACA significantly (43 percent) or replacing it altogether (37 percent)." This data is based on a survey conducted on Nov. 9 to Nov. 13, 2016.

"The majority leader made an accurate statement that, according to Gallup, about 8 out of 10 favor changing Obamacare significantly or replacing it altogether," said Don Stewart, a spokesman for McConnell. "Given the myriad problems with the law and the impact on families, the poll was not a surprise."

An outside specialist in health policy and polling, Robert J. Blendon of Harvard’s T.H. Chan School of Public Health, said McConnell has a good basis for supporting his claim, given Gallup’s framing of the results.

Why it can be misinterpreted

McConnell has been careful in how he relates what Gallup wrote. But the statistic's usefulness for supporting his larger point -- that Obamacare should be repealed in the way he's proposing -- is not as clear. Reading his op-ed, it’s easy to jump to the conclusion that 80 percent of Americans want to repeal the law. But that's not the case, according to the Gallup data.

Other recent surveys fill in some of the blanks about what these respondents might be thinking.

The first three categories include people who either support the law or think it should go even further than it does today:

Keep the law as is: 18 percent

Collectively, then, 40 percent either support an even stronger law or keeping the law as is.

The other three categories align more closely with McConnell’s opinion, and they add up to 50 percent.

Scale back and give states control: 14 percent 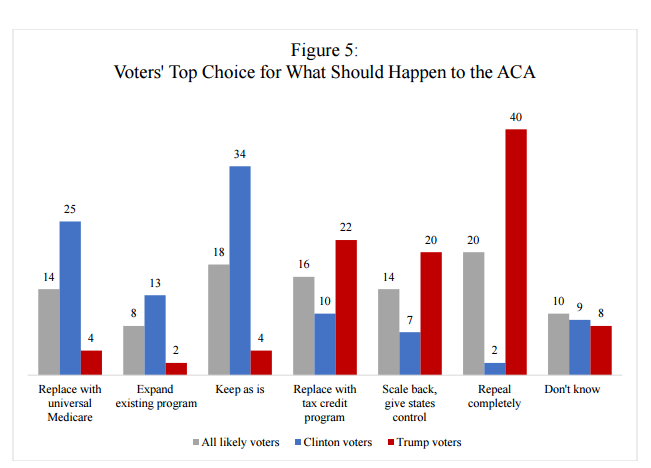 The Politico-Harvard results broadly mirror other recent polls about repealing the Affordable Care Act. In general, more people favor a repeal than oppose one, but support levels for a repeal are in the 40 percent to 50 percent range, rather than the 80 percent range.

McConnell wrote that "Americans continue to call for Obamacare’s repeal. … About 8 out of 10 favor changing ObamaCare significantly or replacing it altogether."

McConnell has carefully worded a statistic from a credible source, the Gallup news release. However, it's worth remembering that a notable share of people whose favored "significant" changes to the law either want a single-payer plan or an even stronger Obamacare law -- two options that are off the table for McConnell. We rate his statement Mostly True.