Stacey Evans
stated on June 12, 2017 in a campaign video:
"I helped win one of the biggest private lawsuits against Medicare fraud in history. The government declined to pursue the case, so my firm did, and we recovered $324 million for taxpayers."

Stacey Evans is running for governor of Georgia, and she’s touting a major Medicare fraud case she argued with her private law practice in a campaign video.

"I helped win one of the biggest private lawsuits against Medicare fraud in history," Evans said on a June 12, 2017 campaign video. "The government declined to pursue the case, so my firm did, and we recovered $324 million for taxpayers."

Evans is referring to a civil lawsuit she argued alongside three other firms representing the U.S. government against DaVita HealthCare Partners Inc., a leading provider of dialysis services in the United States. They represented two whistleblowers.

The lawsuit alleged that DaVita was knowingly generating unnecessary waste when administering drugs to dialysis patients and then billing Medicare for the waste. Readers may recall the lawsuit from a recent installment of Last Week Tonight with John Oliver. 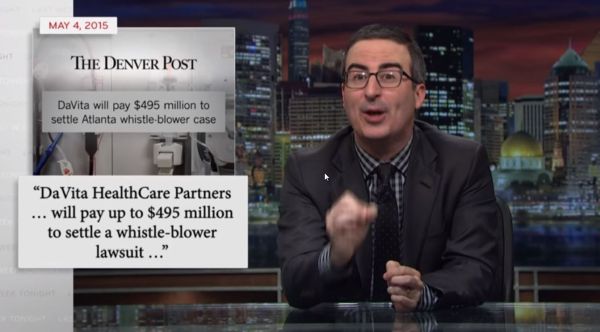 "That's an almost half a billion dollar 'oops,' " John Oliver said of the DaVita settlement on Last Week Tonight on May 14, 2017.

The company did not admit wrongdoing, but paid $450 million in settlements to resolve the claims.

Washington University Law professor Kathleen Clark said that referring to the settlement as a victory is accurate, and characterized the settlement sum as an impressive feat.

Was it one of the biggest in Medicare fraud history, though?

When we asked Evans’ campaign what they meant by private lawsuit, they said they were referring to lawsuits filed under the False Claims Act, whistleblowers’ main vehicle to sue on behalf of the federal government for Medicare fraud when the government does not intervene.

"DaVita recovery was one of the largest ever obtained by a relator in a matter declined by the United States," Navas said.

There have been larger settlements, but only when the government has gone after fraud directly. In this case, the Justice Department chose not to intervene. Navas declined to comment on why they didn’t participate.

"It shouldn’t be taken as a government determination that the case doesn’t have merit," Clark said, noting the government has limited resources to pursue such cases.

Lin Wood, the lead counsel on the case, said the government likely was unaware of all the details of the case when it decided not to pursue a lawsuit.

"We developed a tremendous body of factual evidence that I believe the government was unaware of at the time they made their decision," Wood said. He said the government would have likely intervened otherwise.

When the government doesn’t intervene, clients are entitled to no less than 25 percent and no more than 30 percent of the settlement; according to Wood and Evans, they received 28 percent. The remainder, 72 percent or $324 million, went to the government.

Wood called Evans an integral part of the case, and characterized the other two firms as having played a minor role.

We wondered if that money went directly to taxpayers, as Evans said in the video.

Steve Ellis, vice president of Taxpayers for Common Sense, agreed with Evans’ wording that the money went to taxpayers, which he called a proxy for the treasury. Reducing the treasury’s deficit translates to a benefit to taxpayers.

"The taxes that individual citizens pay is not reduced nor does the money go directly into service benefitting people," Ellis said. "But a smaller deficit means it is less likely that taxes are raised or services cut."

Evans said that she "helped win one of the biggest private lawsuits against Medicare fraud in history." The lead counsel on the case corroborated her role in it, and the Justice Department confirmed its historic importance.

Her claim that they recovered $324 million for taxpayers also checks out.

PolitiFact Rating:
True
"I helped win one of the biggest private lawsuits against Medicare fraud in history. The government declined to pursue the case, so my firm did, and we recovered $324 million for taxpayers."
Stacey Evans
Georgia candidate for governor

Denver Business Journal, "DaVita sets aside $495M for settlement of whistle-blower case," May 4, 2015