Gavin Newsom
stated on June 2, 2017 in a tweet:
"Americans are 25x more likely to be shot & killed than others in developed countries."

So, it’s no surprise Newsom, a Democrat and 2018 candidate for governor, promoted the cause on National Gun Violence Awareness Day.

"Americans are 25x more likely to be shot & killed than others in developed countries. We've had enough. #NationalGunViolenceAwarenessDay." 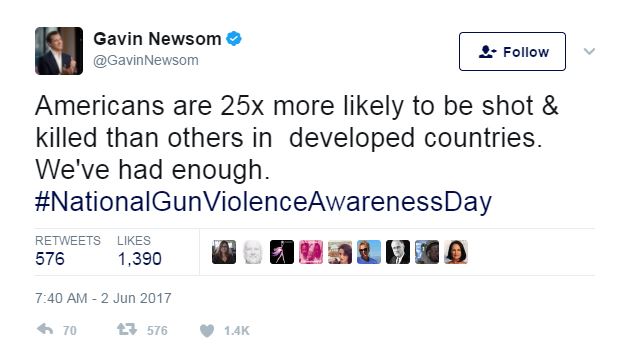 This is not the first time we’ve fact-checked a gun claim by Newsom. In November 2016, we rated Mostly True his assertion that California has seen a "56 percent decline in the gun murder rate" since the 1990s. Earlier that year, we rated Mostly False his statement that "So far in 2015, there have been more mass shootings than days."

In this case, we wondered whether the facts support his claim about the seemingly huge disparity in gun homicide rates between the United States and other developed countries.

We’ll fact-check this claim below.

First, here’s some background on Newsom and the 2018 California governor’s race.

Newsom is among several prominent Democrats as of now competing in 2018 to succeed Jerry Brown as governor. Others include former Los Angeles Mayor Antonio Villaraigosa; California Treasurer John Chiang and Delaine Eastin, the state’s former superintendent for public instruction.

Newsom has supported California’s stringent gun and ammunition laws. In 2016, he proposed and helped pass Proposition 63, a voter initiative that requires instant background checks for the sale of ammunition statewide.

We interpreted Newsom’s claim of "shot and killed" to mean gun homicides. These are intentional killings using a firearm, not including suicides.

To back up the statement, Newsom’s campaign spokesman pointed to a study published in the American Journal of Medicine in March 2016 called "Violent Death Rates: The US Compared with Other High-income OECD Countries, 2010."

The study relied on mortality data from 2010 collected by the World Health Organization. It found the rate of gun homicides was 25.2 times higher in the United States than in 22 other populous and high-income countries for which data was also gathered. A sample of those included South Korea, Australia, Canada, Japan, Germany, the United Kingdom and Italy.

Levar Stoney
stated on June 16, 2022 in a tweet.
“In Virginia, Black people are eight times (8X) more likely than white people to die of gun homicide.”

When considering all types of gun deaths, such as homicides, accidental shootings and suicides, people in the United States were 10 times more likely to die from a gun-related death than those in the other countries, the report said.

Authors of study weigh in

We contacted the co-authors of this study. Both described Newsom’s claim as "accurate."

"Yes, what he said seems accurate," David Hemenway, professor of health policy at the Harvard School of Public Health and co-author, said by email. "I think anyone who looks at the data would agree."

Erin Grinshteyn, an assistant professor of health policy at the University of San Francisco and the other co-author, also said the claim was correct.

Grinshteyn described the report as "purely an academic study."

She said her portion of the work was not funded while Hemenway’s participation was funded, in part, by the Joyce Foundation.

On its website, the foundation says it supports "research-based strategies that can prevent gun violence by reducing the easy accessibility of firearms."

In 2014, PolitiFact examined a related claim by lawyer and author Lisa Bloom that said "Americans are 20 times as likely to die from gun violence as citizens of other civilized countries."

It rated her claim Mostly True, citing figures collected by the United Nations Office on Drugs and Crime. That data showed the United States had a slightly lower gun homicide rate in 2010 than reported in the American Journal of Medicine Study. That, in turn, meant Americans would be closer to 20 times as likely to die in gun homicides compared with several other "civilized countries."

But as PolitiFact noted, much depends on which countries are included in this comparison and the years for which that data was available. Chile and Turkey, both with relatively high gun homicide rates, were included in the United Nations study but not in the report in the American Journal of Medicine.

Grinshteyn told us her study only included high-income, populous countries  as defined by the Organization for Economic Co-Operation and Development.

"If they included Chile and Turkey, which were not included in our comparison group, those will cause the comparison to be skewed," she added.

We reached out to the Sacramento-based Firearms Policy Coalition, a gun rights advocacy group, to ask whether its members knew of any additional and independent reports on this topic. We did not immediately hear back.

Candidate for California governor Gavin Newsom recently said "Americans are 25x more likely to be shot and killed than others in developed countries."

Newsom’s spokesman pointed to a study in the American Journal of Medicine that backs up this very sad statistic. It found the gun homicide rate in the United States is about 25 times greater than in other high-income, industrialized countries such as Japan, Germany, the United Kingdom and Canada.

Newsom’s claim is backed by what appears to be a valid study. But another report with credible findings shows the gun homicide rate is not quite as high compared to other nations as Newsom asserts.

His statement could have used this additional information.

In the end, we rated Newsom’s claim Mostly True.

American Journal of Medicine, "Violent Death Rates: The US Compared with Other High-income OECD Countries, 2010," March 2016

PolitiFact, "Americans are 20 times as likely to die from gun violence as citizens of other civilized countries,' says author Lisa Bloom," Jan. 17, 2014

ScienceDaily.com, Americans are ten times more likely to die from firearms than citizens of other developed countries, Feb. 2, 2016

Washington Post, "Chart: The U.S. has far more gun-related killings than any other developed country," Dec. 14, 2012