Kellyanne Conway
stated on June 25, 2017 in an interview on ABC's "This Week with George Stephanopoulos":
There "are not cuts to Medicaid" in the GOP health care proposals.

Politics and math don’t always get along, and counselor to the president Kellyanne Conway raised a common complaint about how people talk about the future of Medicaid spending under the Senate Republican health care bill.

In an interview Sunday, ABC news host George Stephanopoulos brought up the bill’s projected $800 billion in Medicaid savings and asked Conway if that undermined the president’s campaign promise to spare Medicaid from cuts.

"These are not cuts to Medicaid, George," Conway said on This Week on June 25. "This slows the rate for the future."

Conway was weighing in on a long-running debate over what qualifies as a cut.

And on one level, she has a point, we at PolitiFact found. Future savings are not always "cuts." But in the case of the GOP health care bill, there are indeed cuts that go beyond dollars spent.

The math on Medicaid

To first vet Conway’s statement that there are no cuts to Medicaid, we need to begin with a few basic numbers.

The Congressional Budget Office estimated that under current law, from 2018 through 2026, the federal government would spend about $4.62 trillion dollars on Medicaid.

For the Senate bill, the CBO estimated that total Medicaid spending would be about $770 billion less.

But you can also compare how much Washington spends in 2018 — the first year a health care bill would take effect — and what it would spend in 2026.

Under the Senate Republican bill, spending goes from about $403 billion to about $460 billion.

Point being, spending increases under either scenario, it just increases at a far slower rate under the Senate bill.

This graph from the CBO shows the trajectories for both. 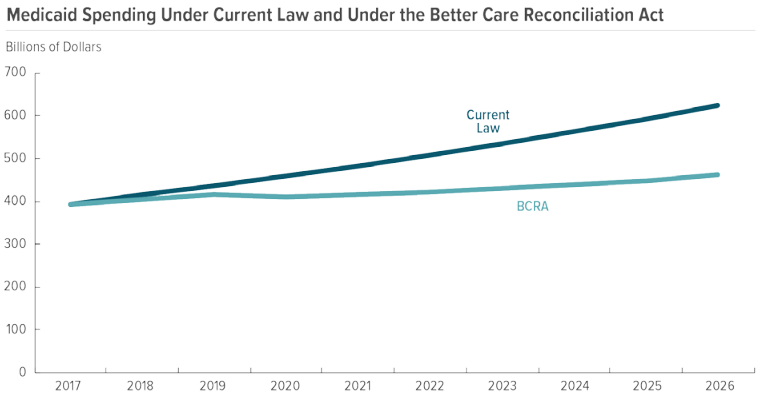 It rolls back who is eligible. Before Obamacare, Medicaid covered low-income children, pregnant women, elderly and disabled individuals, and some parents, but excluded other low-income adults. Under the Affordable Care Act, 31 states and the District of Columbia exercised the option to make Medicaid available to anyone making up to 133 percent of federal poverty. For a family of three, that would be about $27,000 a year. The Senate bill eliminates that option as of January 2018.

This shuts out the Medicaid option for over 2.5 million people in states that didn’t expand eligibility.

The bill also makes federal payments to expansion states less generous. Under Obamacare, Washington covers at least 90 percent of the cost of covering people in the expansion group. That’s a better deal than the regular match, which can be anywhere from 50 to about 70 percent. The Senate bill phases out the higher rate for expansion states and by 2024, the match falls back to the regular rate.

The bill further ends Medicaid’s days as an open-ended promise to cover a certain percentage of a state’s costs. Instead, the bill shifts the program to a capped amount. The cap might apply on a per-person basis, or states might opt to take their money as a block grant. In either case, the amount would rise each year, but using a lower inflation factor than is used today.

It’s the specific nature of those changes that are more important than the total dollars spent.

When Democrats passed the Affordable Care Act in 2010, it included less money for Medicare over the years. In a mirror image of today’s debate, Republicans, notably House Speaker Paul Ryan, accused Democrats of cutting a vital health care program for the elderly. Democrats argued back that spending increased.

We did a series of fact-checks about the back-and-forth and generally rated the Republican attacks Half True.

Then, Democrats reduced payment levels to health care providers. Now, Republicans propose reducing payments to states. But at least in terms of the money trends, both situations follow the same general outlines -- with one key difference:

The Democrats didn’t change the eligible population, and the Republicans do.

That’s a cut. Fewer people will have access to Medicaid no matter how much money is spent.

"Medicaid's imperative, its founding was meant to help the poor, the sick, the needy, the disabled children, some elderly women, particularly pregnant women," she said on ABC. "We are trying to get Medicaid back to its original moorings."

Conway said that Republicans are not cutting the Medicaid program. The Republican health care proposals would slow the rate at which Medicaid spending increases, but spending would still increase.

However, the proposals include policy changes that will leave fewer people eligible for Medicaid. That’s a cut.

Conway’s claim has an element of truth but leaves out critical facts that would give a different impression. We rate the claim Mostly False.

PolitiFact Rating:
Mostly False
There "are not cuts to Medicaid" in the GOP health care proposals.
Kellyanne Conway
Counselor to the president