Rick Perry
stated on June 27, 2017 in a White House briefing:
France "wouldn’t buy Texas beef for some reason, yet 76 percent of their energy comes from nuclear power."

Rick Perry roused reporters at the White House the other day by taking multiple questions including an inquiry prompting the former governor to make a curious two-part claim about France.

Reporter: "Can you assure the American people that nuclear waste and nuclear plant safety are such that we should expand nuclear power in this country?’

U.S. Energy Secretary Perry: "You know, I would reflect that -- or deflect that, if he was here, to President (Emmanuel) Macron of France, who gets 70-plus percent of their power from nuclear energy."

"Now," Perry went on, "this is the country that wouldn’t buy Texas beef for some reason, yet 76 percent of their energy comes from nuclear power. So the French, who I’ve always thought were a little bit different -- (laughter) -- and that’s in a good way. You know, they recognized us as a state back in the 1830s, so we actually have a really close, personal relationship with the French. We like them. We had an embassy in Paris. They had one in Austin; as a matter of fact it’s still there, called the French Legation. Invite all of you to come and see it.

"But the French are a little different when it comes to some things. And one of those I would find it really interesting -- our French friends are very comfortable getting 76 percent, thereabouts, of their energy from nuclear, and I can assure you they’re very fond of getting it at the rate they’re getting it."

Perry was surely referring to France’s official recognition of the Republic of Texas. The country also had a diplomat placed in Austin who intended to live in a building that’s still in place just east of downtown Austin, the French Legation Museum, though that didn’t work out.

Perry’s juxtaposition of beef, nuclear power and France made us wonder. That is, have the French refused to buy Texas beef and does France also rely on nuclear power for 76 percent of its energy?

After  unsuccessfully asking the Energy Department for Perry’s factual backup, we chewed on Perry’s beef beef by reaching Joe Schuele of the U.S. Meat Export Federation.

Schuele told us the entire European Union has banned imports of beef produced with growth hormones for nearly three decades. As of 2017, France ranked among the EU’s 28 member- nations.

A U.S. Department of Agriculture web page, "Export Requirements for the European Union," presents multiple conditions for animal products shipped to EU countries. A portion states: "All bovine meat exported to the European Union must originate from animals that have never been treated with hormonal growth promotants."

Then again, Schuele advised that the EU still imports beef not produced with growth hormones--including about 16,000 metric tons of it, valued at $264 million, in 2016, perhaps some of that making it to France.

Mindful that Perry led Texas from late 2000 into 2014, we asked about the timing of the EU’s beef limits. The ban on beef produced with growth hormones, he said, traces to 1989, when the EU was the European Economic Community.

That roped off many U.S. beef producers, according to a 2015 report by the nonpartisan Congressional Research Service: "In the United States, hormones have been approved for use since the 1950s and are now believed to be used on approximately two-thirds of all cattle and about 90% of the cattle on feedlots. In large U.S. commercial feedlots, their use approaches 100%," the report said. "Cattle producers use hormones because they allow animals to grow larger and more quickly on less feed and fewer other inputs, thus reducing production costs, but also because they produce a leaner carcass more in line with consumer preferences for diets with reduced fat and cholesterol," CRS said.

In 2009, years after the U.S. successfully challenged the EU limits before the World Trade Organization, Schuele said, the U.S. and EU agreed to annual quotas of duty-free beef exports. Any beef shipped in excess of the quota, Schuele said, faces a duty amounting to 20 percent of the shipment’s invoiced value on arrival.

Heerman said by email: "France does import beef from the United States, but it does not import beef treated with hormones that are commonly used throughout North America." But, Heerman said, "we do not have data to determine whether/how much of the beef that is exported to France comes from Texas." Heerman said data on "beef flows" or exports from each state aren’t collected.

Summing up, Schuele wrote: "So while the EU doesn’t exactly refuse to buy U.S. beef, only a small percentage of U.S. beef is eligible for export to the EU."

We turned next to whether 76 percent of France’s power comes from nuclear plants.

A web search led us to an International Atomic Energy Agency web page indicating that in 2016, France drew 72 percent of its electricity from 58 nuclear power plants. Our click on the page’s "trend" button on the page yielded a graph suggesting that since 1997, nuclear power has come close to accounting for 80 percent of France’s power production. 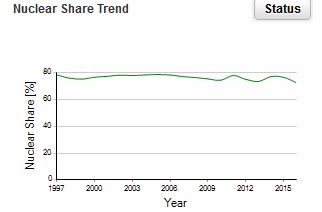 Otherwise Jonathan Cobb of the World Nuclear Association replied to our email inquiry by pointing us to a web page overseen by the Paris-based International Energy Agency, whose 29 member-nations collectively respond to oil-supply interruptions. In 2015, according to the IEA, France drew 78 percent of its electricity from nuclear plants.

Perry told reporters that France "wouldn’t buy Texas beef for some reason, yet 76 percent of their energy comes from nuclear power."

Perry's main point holds up; France gets about three-quarters of its electricity from nuclear power. But his beef mention lacks clarification in that it was the European Union (not France alone) that banned only hormone-raised beef. Some beef continues to be imported to the EU.