California Lt. Gov. Gavin Newsom seized on comments by Rep. Jason Chaffetz, R-Utah, this week after the congressman made a controversial comparison between the cost of an iPhone and healthcare.

Here’s what Chaffetz said in a CNN interview on March 7, 2017 when asked about the potential that the GOP’s Obamacare replacement plan could leave lower-income Americans uninsured:

"Well we're getting rid of the individual mandate. We're getting rid of those things that people said they don't want. And you know what? Americans have choices. And they've got to make a choice. And so, maybe rather than getting that new iPhone that they just love and they want to go spend hundreds of dollars on that, maybe they should invest it in their own health care. They've got to make those decisions for themselves."

After his comments caused a stir, Chaffetz said on Fox News later the same day that he could have made his point a different way.

"What we're trying to say -- and maybe I didn't say it as smoothly as I possibly could -- but people need to make a conscious choice and I believe in self-reliance. And they're going to have to make those decisions."

In response to Chaffetz’ iPhone-to-healthcare comparison, Newsom sent out a tweet that’s since garnered quite a bit of its own attention: 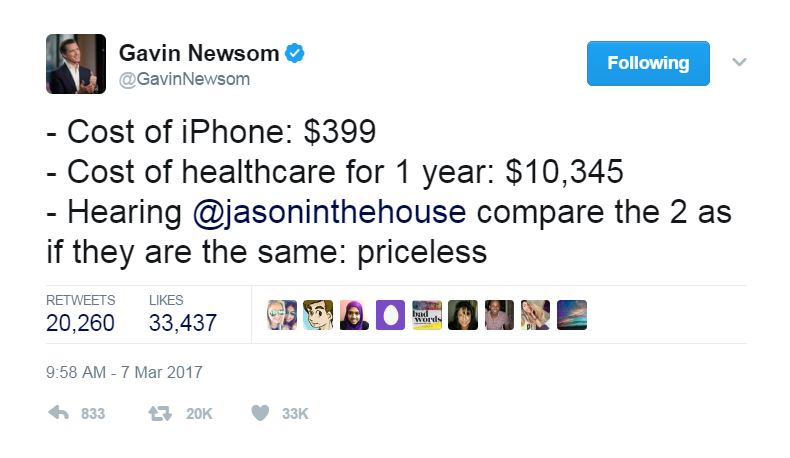 Newsom’s tweet had received more than 20,000 retweets, or shares, and more than 33,000 likes on Twitter as of the time we published.

The Democrat is running for California governor in 2018 and has strongly opposed GOP plans to replace the Affordable Care Act.

We wanted to know if Newsom got his numbers right and whether he accurately described the iPhone vs. health care comparison made by Chaffetz.

We started with Newsom’s $399 figure for iPhones.

Apple’s iPhone SE, one of the company’s smallest iPhones with a 4-inch display, is listed at $399 on apple.com. It’s the cheapest of the five iPhone models featured on Apple’s website.

The most expensive is the new iPhone 7 Plus listed at $769.

Newsom’s campaign spokesman told us the lieutenant governor was referring to the SE model.

Of course, iPhones require a monthly service charge. Neither Chaffetz nor Newsom, however, made any specific claims about that cost.

To back up Newsom’s claim that one-year of healthcare costs $10,345, his spokesman pointed to a 2016 report by the U.S. Department of Health and Human Services.

That figure, however, is not the end of the story. Like so much in the healthcare industry, it’s complicated to determine how much the average American actually spends on healthcare.

Here’s how the Associated Press further explained the figure:

Two health care policy experts pointed to the $10,345 figure as the best available.

"That’s an accurate number," said Joy Melnikow, director of the UC Davis Center for Healthcare Policy and Research. "That number is as good as any."

While the government and private business pay for the bulk of the nation’s health care costs, Melnikow noted the government gets its money from taxpayers: "That’s all of our money. We’re paying for it."

A spokesman at the Kaiser Family Foundation, which studies health policy, also pointed to the $10,345 figure as the best available.

The Washington Post’s Wonkblog looked at the iPhone vs. healthcare cost another way, by examining the cost of the most expensive iPhone (about $800 with tax) against the cost of a health plan through Obamacare’s individual market. Here’s what it found:

"... (A) year of individual insurance coverage on the open market will run you about $393 per month, or $4,617 per year, per eHealth. For the purpose of this comparison we'll assume you're a healthy individual who doesn't have to worry about deductibles (which run over $4,000 for these plans), and that that $4,617 is all you have to pay. Even in this expensive-iPhone no-deductible scenario, the typical annual cost of an individual market plan costs is about six times as costly as Chaffetz's "new iPhone."

Of course, not everyone is so healthy and many pay high deductibles before their insurance kicks in. Combining the annual $4,600 in premiums with $4,000 in deductibles under the Obamacare plan cited in the Washington Post would total about $8,600.

That’s less than Newsom’s figure, but it’s in the ballpark when considering additional out-of-pocket expenses such as co-payments

We also examined Newsom’s final claim that Chaffetz had compared the iPhone and health care costs "as if they are the same."

Chaffetz’ comments, particularly his phrase "Americans have choices. And they’ve got to make a choice," leave the impression that obtaining health care is as simple as sacrificing the purchase of a smartphone.

Democratic California Lt. Gov. Gavin Newsom caused a stir with his response to a controversial comparison of the costs of an iPhone and healthcare made by Rep. Jason Chaffetz, R-Utah.

Newsom claimed iPhones cost $399 while one-year of health care costs $10,345. The lieutenant governor is right about the phone cost, though he selected the cheapest iPhone featured on Apple’s website.

In coming up with his health care cost estimate, Newsom’s spokesman cited a federal report showing the nation’s overall health care costs were expected to surpass $10,000 per capita for the first time in 2016.

That figure does not necessarily mean everyone is spending $10,345 on health care. Costs vary greatly among individuals. About 5 percent of the population — those who are most frail or sick — accounts for nearly half the spending in a given year, according to the Associated Press.

Another look at the iPhone vs. health care cost comparison by the Washington Post shows plans in the Obamacare market would cost an individual about $8,600 in premiums and deductibles annually, which when combined with out-of-pocket expenses might not be far from is the $10,345 figure Newsom cited.

In the end, we found evidence to back up Newsom’s figures.

We also found Chaffetz made enough of a connection between iPhones and health care costs to back up Newsom’s claim that the congressman compared them "as if they are the same."

Newsom’s overall statement is accurate, though it needs some clarifications or additional information.

Politifact Rating:
Mostly True
"Cost of iPhone: $399 - Cost of healthcare for 1 year: $10,345 - Hearing @jasoninthehouse compare the 2 as if they are the same: priceless"
Gavin Newsom
California Lt. Governor

Washington Post, Wonkblog, "If Jason Chaffetz wants to compare health care to iPhones, let’s do it the right way," March 7, 2017