Scott Pruitt
stated on March 9, 2017 in an interview on CNBC:
Carbon dioxide is not "a primary contributor to the global warming that we see."

The new head of the Environmental Protection Agency Scott Pruitt says carbon dioxide is not a primary contributor to global warming.

"Do you believe that it’s been proven that CO2 is the primary control knob for climate?" CNBC anchor Joe Kernen asked Pruitt in a March 9 interview.

"No, I think that measuring with precision human activity on the climate is something very challenging to do and there's tremendous disagreement about the degree of impact," Pruitt responded. "So no, I would not agree that it's a primary contributor to the global warming that we see."

Scientists around the globe generally conclude that human activity is the leading cause of climate change because humans have exacerbated the Earth’s greenhouse effect, mainly by producing carbon dioxide.

Compare Pruitt’s statement with one on his agency’s website, for example: "It is extremely likely that human activities have been the dominant cause of that warming," and then, "Carbon dioxide is the primary greenhouse gas that is contributing to recent climate change."

Environmental activists opposed Pruitt’s nomination, in part because in his former role as attorney general of Oklahoma, Pruitt sued the EPA more than a dozen times over air and water pollution regulations.

However, Pruitt has said he believes in climate change and that human activity is contributing to that change, though he is unconvinced of the extent of human-caused factors.

"The climate is changing, and human activity impacts that," he said in his Senate confirmation hearing.

When we reached the EPA for comment, they did not provide us with information to back up Pruitt’s claim.

The normal environment of the earth is that several types of gas stick in the atmosphere and trap excess heat, including carbon dioxide, water vapor, methane and nitrous oxide, making a natural "greenhouse." Since the Industrial Revolution in the early 1800s, humans have changed the composition of the greenhouse — leading to climate change — by releasing significant amounts of carbon dioxide into the air primarily through burning fossil fuels.

"Pruitt is incorrect. CO2 is a primary contributor to global warming. That fact is not in dispute among climate scientists," said Anne Slinn, executive director for research of the Center for Global Change Science at the Massachusetts Institute of Technology.

This chart from the National Oceanic and Atmospheric Administration shows that even though the earth has experienced fluctuations in carbon dioxide levels throughout its history, there’s more carbon dioxide now than there has been in at least 400,000 years. 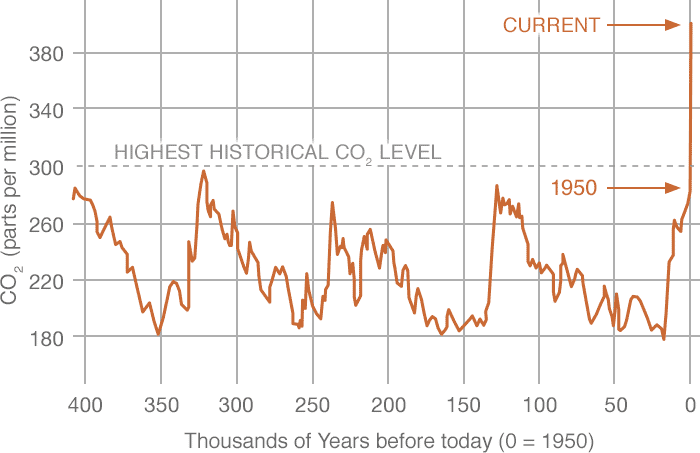 By the end of the 1970s, before global warming was readily apparent, scientists had already formed a consensus that human-produced carbon dioxide would cause the climate to change. And by the mid-1990s, scientists understood that global warming had already occurred over the past 100 years, and carbon dioxide was a substantial cause, said Ralph Keeling, director of the Scripps CO2 Center at the University of California, San Diego.

"Administrator Pruitt’s statement means that he does not accept the overwhelming scientific consensus," said Stephen Pacala, co-director of Princeton University’s Carbon Mitigation Initiative, pointing to a 2013 report out of the Intergovernmental Panel on Climate Change.

We reached numerous climate experts, all of whom reiterated the view that Pruitt’s claim is contrary to the prevailing scientific thought. For a perspective outside the norm, we also reached out to Roger Pielke Sr., an emeritus professor of atmospheric science at Colorado State University, who has argued that carbon dioxide is one of many human-caused factors contributing to long-term changes in the climate, but it’s not the dominant one. For example, the release of black carbon (soot) or land use changes might have a larger effect on the climate relative to carbon dioxide than is currently believed.

In Pielke’s view, a more accurate version of Pruitt’s statement would be: "I would not agree that CO2 is the only contributor to changes and longterm variations in climate."

Pruitt said carbon dioxide is not "a primary contributor to the global warming that we see."

The prevailing scientific consensus is that human production of carbon dioxide since the Industrial Revolution is a leading cause of climate change. Some scientists may quibble over how much of the change can be attributed specifically to carbon dioxide, but there is no doubt that it plays an important role.

Politifact Rating:
False
Carbon dioxide is not "a primary contributor to the global warming that we see."
Scott Pruitt
EPA administrator