Arnold Schwarzenegger
stated on February 23, 2017 in a tweet:
"The average margin of victory in the House of Representatives was 37%" for Democrats and Republicans in the 2016 election.

He also recently squashed rumors he might run for U.S. Senate.

That doesn’t mean, however, that the bodybuilder-turned-movie-star-turned-politician plans to fade quietly into the Hollywood sunset.

Schwarzenegger’s next adventure is tackling what he calls America’s rigged political redistricting system.

"Gerrymandering has created an absurd reality where politicians now pick their voters instead of the voters picking their politicians," Schwarzenegger, a Republican, said in a recent video.

He cites reforms in California as a model for the nation: In 2008, voters in the state approved a bipartisan Citizens Redistricting Commission, which has been credited for drawing district boundaries in a way that’s made some state and congressional races more competitive.

Schwarzenegger made a claim on Twitter and Facebook about just how lopsided congressional races have become nationwide: 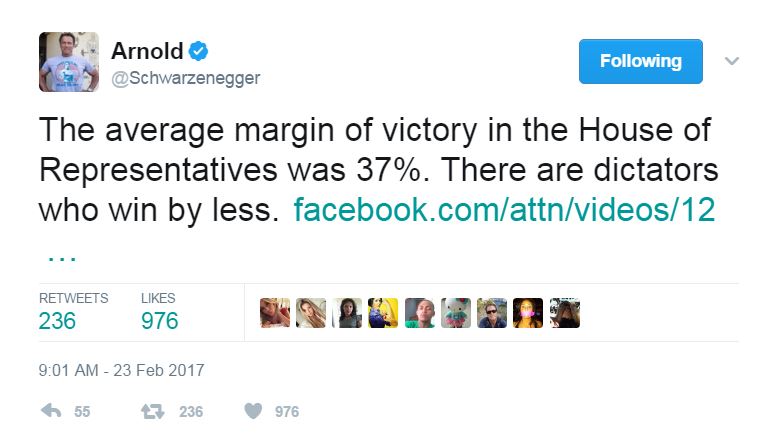 "The average margin of victory in the House of Representatives was 37%," he said on Twitter on Feb. 23, 2017, referring to the average percentage point victory for both Democrats and Republicans in the 2016 election. "There are dictators who win by less."

Given Schwarzenegger’s new focus, we decided to see whether his claim about margin of victory in House races is correct -- or all pumped up. Our fact check focused on his 37 percent figure.

We asked Schwarzenegger’s spokesman for evidence. He cited a breakdown of the 2016 election on the website ballotpedia.org. It’s an independent, online encyclopedia of American politics and elections.

And, indeed, it lists the average margin of victory for members of the House at 37.1 percent. It notes that’s up from the 35.8 percent margin in 2014.

We checked with one more knowledgeable source: Jack Pitney, a longtime professor of politics at Claremont McKenna College and former director of the Republican National Committee’s Research Department.

Pitney crunched last year’s election numbers for us and found a 39 percent margin of victory for House members. He said he wasn’t sure what accounted for the slight difference in his findings.

"But the bottom line is that Arnold's point -- House members win by big margins -- is essentially correct," Pitney said.

What accounts for that huge margin? Pitney said part of it is deliberate gerrymandering, and part is that "constituencies are increasingly polarized."

Issa, who’s been in Congress since 2000, has won his district by 20 or even 30 percentage points in previous elections.

But as the Washington Post reported in December 2016, the commission hasn’t led to changes in party control in any of California’s 53 congressional districts for several election cycles:

"For the fourth time in 12 years, not a single one of the state's 50-plus congressional districts switched parties. Just as in 2010, 2008 and 2004, every single seat returned to the party that previously controlled it," the Post reported on Dec. 1, 2016, adding that "competitiveness has only ticked up slightly (in California’s congressional districts) under the new map."

We asked Pitney how well the commission has performed:

"There’s a debate about that," he told us. "Some argue that what appeared to be a nonpartisan process was actually gamed by Democrats. Be that as it may, the real reason for Democratic dominance in congressional elections is there’s just a lot more Democrats in California than there are Republicans. The state’s been trending heavily Democratic for years."

Schwarzenegger also mentioned the electoral margins for dictators. That's not part of this fact-check but we thought it would be fun to check their margins, too.

In 2014, BBC News examined this topic in its article "The world of 100% election victories." Here’s what it found:

Former California Gov. Arnold Schwarzenegger recently claimed the  "average margin of victory in the House of Representatives was 37%" among Republicans and Democrats during last year’s election.

That claim is supported by the 37.1 percent margin calculated by independent election tracker ballotpedia.org and longtime politics professor Jack Pitney of Claremont McKenna College, who put the margin slightly higher at 39 percent.

The evidence shows Schwarzenegger was on target with his claim.

Politifact Rating:
True
"The average margin of victory in the House of Representatives was 37%" for Democrats and Republicans in the 2016 election.
Arnold Schwarzenegger
Former California Governor

Washington Post, California just proved how cracking down on gerrymandering isn’t all it’s cracked up to be, Dec. 1, 2017