Amanda Carpenter
stated on November 13, 2017 in a CNN roundtable:
"There are ‘sore loser’ laws that would bar Luther Strange from pursuing a seat" because he already lost the Alabama Republican Senate runoff to Roy Moore.

With Republican Alabama Senate nominee Roy Moore reeling from allegations of sexual improprieties with teenaged girls in the late 1970s, political observers are chasing down all the angles for what could happen in the Dec. 12 special election.

One key question is this: Could Luther Strange, the appointed senator who lost to Moore in the Republican runoff earlier this year, still seek the Senate seat?

"I think Luther Strange would be a strong candidate for a write-in," Sen. Pat Toomey, R-Pa., said on Meet the Press. "But a write-in is very difficult, let's face it."

This possibility also came up during a segment of CNN’s The Lead with Jake Tapper. There, conservative pundit Amanda Carpenter said the task may be more than just difficult.

"There are ‘sore loser’ laws that would bar Luther Strange from pursuing a seat, having already lost the primary," said Carpenter, a former aide to Sen. Ted Cruz, R-Texas.

In a tweet sent after her appearance on CNN, Carpenter said the state does have a sore loser law but asked her followers, "Can someone definitively say whether that allows a primary loser to run a write-in campaign?" She later tweeted, "I understand Strange could not appear as a printed choice on ballot but a deliberate write-in campaign seems subject to challenge." (Carpenter did not respond to an inquiry for this article.) 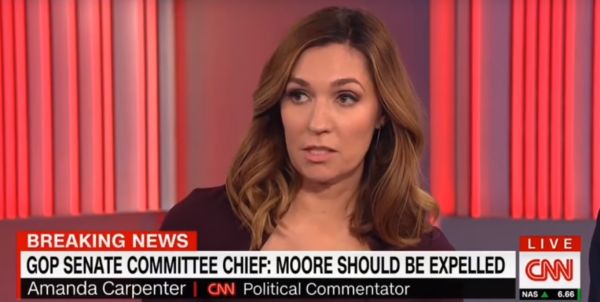 With a sitting U.S. senator pushing the idea of a Strange write-in campaign, we at least wanted to see if it is possible, or if Strange is barred from pursuing the seat in any way.

The answer is there is an opening for Strange, legally.

We’ll walk you through how, and the other electoral machinations that are possible.

Could Strange (or anyone else) simply replace Moore on the ballot, or get a different ballot line?

No. According to Alabama Code 17-6-21(c) any withdrawal must occur at least 76 days before Election Day. By now, it’s too late to print new ballots, and several hundred ballots listing Moore have already been cast, officials say.

Would Strange be barred from running due to a "sore loser" law?

No. He would be fine as long as he runs as a write-in candidate.

Alabama does have a "sore loser" law that prevents primary losers from making a second run in the same election as an independent. However, Alabama Secretary of State John Merrill has told several news outlets that the law applies only to names printed on the ballot -- a scenario that is now moot because the ballot text is already set.

Merrill made clear in those interviews -- and experts agree -- that the sore-loser law would not prevent Strange from running as a write-in candidate.

"There are no existing stipulations that prohibit a candidate from being elected despite having unsuccessfully run for a party’s nomination, which would normally apply due to Alabama’s sore loser law," the Alabama secretary of state said in a statement. 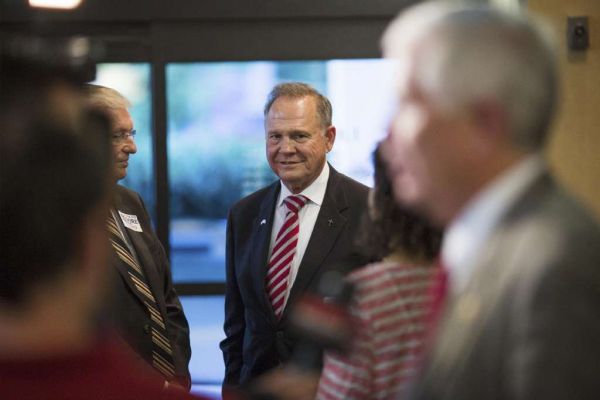 What happens if Moore voluntarily quits the race?

Moore’s name would remain on the ballot, but votes cast for him would not count. (This would also be the case if the state Republican Party officially disowned Moore’s candidacy, something they have not done as of this writing.)

If Moore’s Democratic opponent, Doug Jones, or any write-in candidate were to receive the most votes of any candidate -- including Moore -- they would be the winner.

If Moore gets the most votes, however, the situation gets murkier.

Merrill told Fox News that under that scenario, the election would be declared "null and void," and the governor, Republican Kay Ivey, would schedule a new special election, starting the whole process again.

However, "I am not sure that's accurate under state law," said Derek T. Muller, a Pepperdine University law professor who has written about the Alabama scenario.

Muller has written that there are two approaches that have generally been taken in situations like this.

One is known as the "American rule." Under that system, the votes for any deceased, withdrawn, or ineligible candidate would not be counted, and the election would be declared null and void.

The other is known as the "English rule." Under this system, the ineligible candidate would also not have their votes counted, but in this case, the second-place finisher would win.

Muller’s research found that Alabama has previously used the American rule, but in 2014, the legislature unanimously passed HB 62, which added language about withdrawn candidates, saying that the canvassing board "may not certify any votes for the candidate."

To Muller, "that means that candidate cannot receive the most votes. And that means the ‘American rule’ is not at play."

In other words, if Muller’s interpretation is correct, Jones would win even if Moore secured the most votes after withdrawing or being disowned by the party. That conflicts with what Merrill had said on Fox News.

We did not hear back from the secretary of state’s office to clarify this point.

For the record, Strange said on Nov. 13 that it was "highly unlikely" that he would run for the seat in the wake of the revelations about Moore. And on Nov. 14, Moore sent a tweet that didn’t sound like a candidate looking to leave the race. "Alabamians will not be fooled by this #InsideHitJob. Mitch McConnell's days as Majority Leader are coming to an end very soon. The fight has just begun," he tweeted.

Alabamians will not be fooled by this #InsideHitJob. Mitch McConnell's days as Majority Leader are coming to an end very soon. The fight has just begun. https://t.co/unVysRKDKz

Carpenter said, "There are ‘sore loser’ laws that would bar Luther Strange from pursuing a seat," because he lost the primary to Moore.

Alabama does have a "sore loser" law that prevents primary losers from making a second run in the same election as an independent or with another party. But the consensus is that this law applies only to names printed on the ballot -- a scenario that is now moot because the ballot text is already set.

Carpenter said as much in a subsequent tweet but added that a write-in candidacy could face legal challenges.

Winning a write-in campaign faces long odds, but the bottom line is that Strange could make the attempt if he wishes. We rate Carpenter's statement False.

Derek T. Muller, "Sorting out the Alabama Senate election possibilities: what happens to the votes of a withdrawn candidate?" Nov. 11, 2017