Matt Flynn
stated on November 4, 2017 in a news release:
Under Scott Walker, "average wages, when adjusted for inflation, are lower today than they were under Jim Doyle."

Attacks on Gov. Scott Walker stepped up with his announcement that he would seek a third term in the 2018 election. (Michael Sears/Milwaukee Journal Sentinel)

"Scott Walker’s time is up," was how Flynn, a Democrat running in the 2018 race for governor, began his Nov. 4, 2017 news release. "Average wages, when adjusted for inflation, are lower today than they were under Jim Doyle."

Walker, who has been governor since 2011, has used a number of economic statistics to argue that things are better than they were under Doyle, who served from 2003 through 2010.

So, let’s see how the claim from Flynn, a lawyer and former chairman of the state Democratic Party, stands up.

Under Walker, are average wages lower in Wisconsin than they were under Doyle?

The claim alludes to Walker bearing some responsibility, but doesn’t directly blame him. And governors play an important but limited role in wages.

To back Flynn’s claim, his campaign cited two sets of statistics, both adjusted for inflation.

The figures are from the latest U.S. Bureau of Labor Statistics’ Occupational Employment Statistics, which are estimates based on data collected from employers in all industry sectors in Wisconsin.

But Doyle served another full year. The figure for 2010 was $17.37 -- 6 cents lower than in 2016 under Walker. More importantly, the Bureau of Labor Statistics warns against using this particular set of data to make comparisons over time. So, we’re discounting this point.

That’s according to a 2017 report by COWS, formerly known as the Center on Wisconsin Strategy, at the University of Wisconsin-Madison. The report cites statistics produced by the left-leaning Economic Policy Institute. The Washington, D.C.-based institute says it used Current Population Survey data, produced jointly by the U.S. Bureau of Labor Statistics and the U.S. Census Bureau, that are good for comparisons over time.

Mark Pocan
stated on August 27, 2021 in Twitter
End of eviction moratorium means “millions of Americans” could lose their housing in the middle of a pandemic. 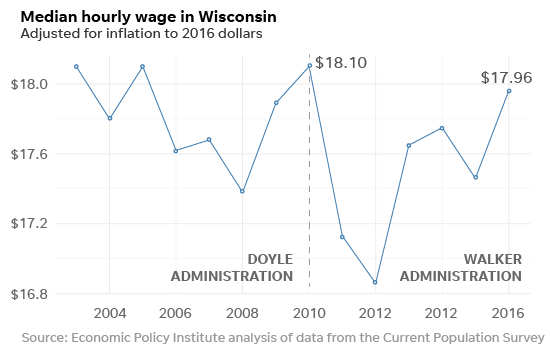 So, the second statistic tends to support Flynn’s claim -- although both statistics he cites are for median wages, rather than average.

While average is the term Flynn used, many people use that word even when referring to median. Some economists recommend using the median, since it is a midpoint -- half of people earned wages below that point and half were above. In contrast, the average can be greatly influenced by extremes; for example, it will be pulled higher if there are many people earning very high incomes.

We produced our own inflation-adjusted numbers for average wages, the term Flynn used, with data from the Bureau of Labor Statistics that can be used for comparisons over time.

The average weekly wage in Wisconsin in 2016 was $885 -- higher than every year under Doyle -- according to the latest figures from the Bureau of Labor Statistics’ Quarterly Census of Employment and Wages.

The QCEW figures come from quarterly counts of employment and wages reported by employers covering more than 95 percent of U.S. jobs. 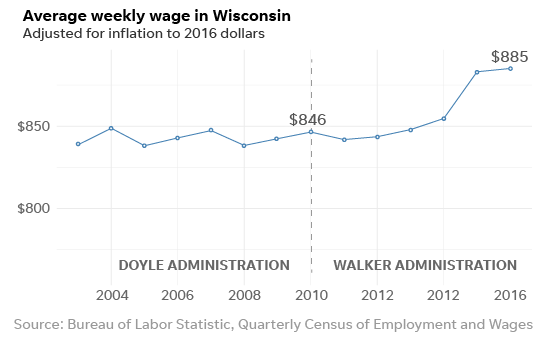 By another measure, for only the private sector, the average weekly wage in August 2017 was $827 -- higher than the August figure for every year under Doyle dating back to 2007 -- according to the latest Bureau of Labor Statistics’ Current Employment Statistics figures. (Figures before 2007 are not available).

So, the average wage under Walker is higher than when Doyle left office in 2010.

Flynn says that under Walker, "average wages, when adjusted for inflation, are lower today than they were under Jim Doyle."

Adjusting for inflation, the average wage is higher under Walker than it was when Doyle left office in 2010.

But sometimes people use the more common term average when they’re actually referring to the median -- which some economists say is a better measure for wages because an average can be distorted by people who earn very high wages. The median wage was higher when Doyle left office than it is under Walker.

Flynn’s statement is partially accurate but leaves out important details -- our definition of Half True.

PolitiFact Rating:
Half True
Under Scott Walker, "average wages, when adjusted for inflation, are lower today than they were under Jim Doyle."
Matt Flynn
2018 Democratic candidate for Wisconsin governor
https://www.wispolitics.com/2017/flynn-campaign-statement-on-walker-campaign-announcement/

Center on Wisconsin Strategy, "The State of Working Wisconsin 2017, Facts and Figures," 2017

Instagram posts
stated on September 23, 2021 an Instagram post:
Says Joe Biden said: “If Haiti just quietly sunk into the Caribbean, or rose up 300 feet, it wouldn’t matter a whole lot in terms of our interests.”

Facebook posts
stated on August 24, 2021 a Facebook post:
“Hundreds of thousands died after taking the advice of these celebrities,” who are “aiding and abetting mass murder” by advocating COVID-19 vaccination.

TikTok posts
stated on September 2, 2021 a TikTok video:
The Pfizer COVID-19 vaccine “is not approved.”

Breitbart
stated on September 13, 2021 an article:
“Polling center tells some Republicans they ‘already voted’" in the California recall election.

Viral image
stated on September 8, 2021 a Facebook post:
"Florida has had 119 hurricanes since 1850,” yet experts are saying “the last one was due to climate change."

Viral image
stated on September 5, 2021 a Facebook post:
“The Bidens own 10% of” a Chinese firm whose stock is up almost 300%” since Joe Biden was elected.

The Gateway Pundit
stated on August 29, 2021 an Instagram post:
“New Israeli study finds fully vaccinated people are at ‘greater risk of hospitalization’ and 13 times more likely to catch COVID-19 than those who have recovered and have natural immunity.”