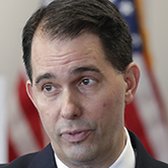 Scott Walker, a Republican, is the former governor of Wisconsin. He was first elected in November 2010. He survived a recall election in 2012, defeating Milwaukee Mayor Tom Barrett after igniting controversy with a bill curtailing public-employee union collective-bargaining rights.  He won re-election to a four-year term in November 2014 and was a 2016 presidential candidate before dropping out in September of 2015. He was defeated by Tony Evers in the 2018 gubernatorial election. Walker is a former Milwaukee County executive and former member of the state Assembly.