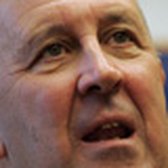 Jim Doyle, a Democrat, is the former governor of Wisconsin. He was elected to the post in 2002, after serving as the state's attorney general, and was re-elected in 2006. He did not seek a third term in 2010 and went to work for a Milwaukee-based law firm.