Antonio Villaraigosa
stated on July 31, 2017 in an interview on MSNBC:
"In the eight years that I was mayor, (there was a) nearly 50 percent drop in violent crime, gang crime — crime went down because we grew our police department, we focused on constitutional community policing, we did some of the most innovative prevention, intervention, job re-entry programs in the nation."

During his time as mayor of Los Angeles and now in his campaign for California governor, Antonio Villaraigosa has repeatedly highlighted the city’s drop in violent crime.

Villaraigosa, one of the top Democrats vying to succeed Gov. Jerry Brown in 2018, spoke in detail in a late July interview on MSNBC about LA’s reduction in violent crime and the steps he claims led to that result.

"In the eight years that I was mayor, (there was a) nearly 50 percent drop in violent crime, gang crime — crime went down because we grew our police department, we focused on constitutional community policing, we did some of the most innovative prevention, intervention, job re-entry programs in the nation." 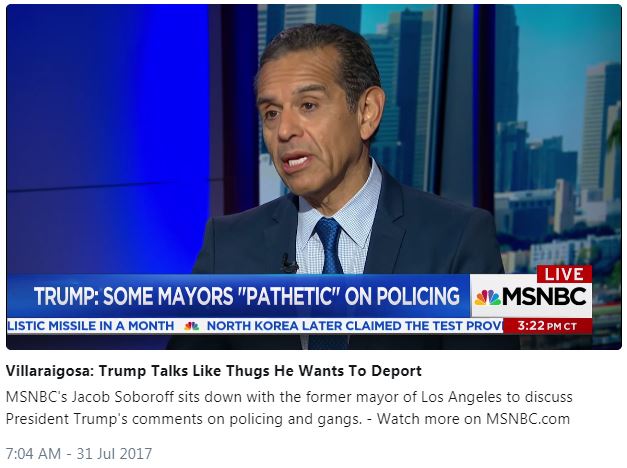 Villaraigosa makes his claim on MSNBC at about the 0:50 minute mark here.

He made a similar claim on Capital Public Radio on October 4, 2017.

"When I was mayor of Los Angeles … we reduced our violent crime rate by 49 percent."

To support the claim, Villaraigosa’s campaign pointed us to crime statistics and past news articles discussing the former mayor’s crime initiatives.

We started by reviewing FBI crime data. Here’s what we found:

That represents a 48 percent reduction in the violent crime rate, homicide, rape, robbery and assaults.

That matches with his claim of a "nearly 50 percent drop in violent crime" made on MSNBC in late July. It also tracks with his more recent statement on Capital Public Radio.

In addition to looking at the violent crime rate, we also reviewed the raw number of reported violent crimes over Villaraigosa’s tenure. That total was nearly cut in half from 31,767 in 2005 to 16,524 in 2013, LAPD statistics show.

Charis Kubrin, a professor of criminology, law and society at the University of California at Irvine, reviewed Villaraigosa’s claim at our request and told us "the numbers do check out."

Kubrin added, however, that the more difficult challenge is determining how much of an impact Villaraigosa’s initiatives had on crime.

"It’s noteworthy that violent crime was going down well before 2005," Kubrin said. "So there’s some question as to whether these are continuing trends or there’s something new about the time period he went into office."

For some perspective, violent crimes in LA dropped nearly 50 percent in the decade before Villaraigosa was elected mayor. They totaled nearly 73,000 in 1992 and had decreased to less than 38,000 by 2002.

Robert Stern, former president of the Los Angeles-based Center for Governmental Studies, said Villaraigosa should get some credit for his successful push to hire hundreds of new LAPD officers.

But, Stern said, "The main credit has to go to the police chief Bill Bratton. And also the fact that what we saw across the country was a reduction in crime in almost all the major cities. So, it was a trend that LA participated in. But I think the mayor can claim some credit at least for increasing the police force."

Violent crime rates fell by 50 percent nationwide from the early 1990s through 2015, according to an analysis of data compiled by the Pew Research Center.

Looking at another large city, New York, during the specific period of Villaraigosa’s tenure, we found only a 7 percent decline in the violent crime rate. But looking at a broader period, from 1995 through 2013, New York saw a nearly 60 percent decline.

Breaking from the long-term trend, California and the nation saw an increase in violent crime rates in 2016 and 2015, according to state and national figures.

Criminologists credit factors from the economy to demographic changes to incarceration rates for driving crime trends nationally and in California. As mayor, Villaraigosa had limited influence over many of these factors.

Kubrin said Villaraigosa’s expansion of the police force, by itself, was probably not the main driving force behind the crime reduction. Instead, she cited the strategy executed by the police as a more important element.

Researchers have found those police strategies are likely to reduce crime, the professor added, though their impact is limited.

Villaraigosa’s campaign additionally pointed to praise from current LAPD Chief Charlie Beck in a 2013 Los Angeles Daily News article. Beck was paraphrased in the article as saying the violent crime drop during Villaraigosa’s tenure was "unprecedented."

Beck "attributed it largely to the outgoing mayor’s steadfast commitment — even during the Great Recession — to expand the LAPD during his tenure," the article said.

Beck said the mayor’s public safety strategy was effective, the article continued, "because it also included diverting at-risk youth from gangs; recruiting gang members to prevent conflicts between rival gangs from flaring up; and handing out grocery store gift cards in exchange for guns."

LAPD statistics on gang crime during Villaraigosa’s tenure were not immediately available. In his statement on MSNBC, the former mayor specifically cited gang crime as one category of violent crime that had dropped.

News articles generally back up this statement. An investigation by VICE News in 2015, however, sheds light on a more nuanced change in LA gang crime in recent years.

It found that while "gang crime is down in the city, many experts cautioned that gangs haven't disappeared."

"Gang members and gangs altogether have gone underground, pure and simple," Jorja Leap, a UCLA professor who researches gangs and criminal justice, told VICE News. She noted that social media has allowed gang members to retreat indoors, and that they have become more involved in lucrative illicit activities such as human trafficking. "They have not disappeared but become more knowledgeable."

Villaraigosa’s claim about a nearly 50 percent drop in violent crime during his time as LA mayor is backed up by LAPD crime statistics.

His explanation for why this drop in crime took place is more difficult to evaluate.

Experts we spoke with noted that violent crime had been falling well before Villaraigosa took office. They also said that key factors that drive crime trends, such as the economy, changing demographics and incarceration rates, are largely out of the control of a mayor.

Villaraigosa’s statement does not include this context.

Still, the mayor’s successful push to hire hundreds of new LAPD officers and focus on community policing is generally accepted as having, at the very least, some impact on reducing crime in the city.

Vice News, How the LAPD Got Smart and Started Winning the War Against Street Gangs, Jan. 10, 2015