Breitbart
stated on October 17, 2017 in a news article:
An undocumented immigrant "was arrested on suspicion of arson in (the) Wine Country fires that have killed at least 40 residents."

As authorities continued to investigate the cause of Northern California’s deadly wildfires this week, they refuted what they described as false claims started by the conservative website Breitbart about their investigation.

A Breitbart article on Oct. 17, 2017 said Jesus Fabian Gonzalez, 29, "was arrested on suspicion of arson in (the) Wine Country fires that have killed at least 40 residents."

Even so, the article quickly spread across right-wing media outlets, including InfoWars and the Drudge Report, which shared Breitbart's unsubstantiated claims -- as detailed by BuzzFeed News.

The series of wind-driven fires that started Oct. 8, 2017 has destroyed more than 8,400 homes, businesses and other buildings and killed at least 42 people across Northern California. It is the most deadly series of fires in California’s history.

While there’s a strong desire for answers about what caused the fires, the investigation is still in its early stages.

We decided to fact check Breitbart’s controversial claim that Gonzalez is now the target of an arson probe connected to the deadly fires, despite arguments to the contrary by authorities.

We started by reviewing comments by Sonoma County Sheriff Rob Giordano at a press conference on Oct. 17, 2017, the same day Breitbart’s article was published.

The sheriff said his deputies arrested Gonzalez two days earlier on a felony arson charge for allegedly starting "a small fire" that was unconnected to the larger blazes and was quickly put out. Gonzalez, a Sonoma Valley man who sheriff's officials described as homeless, told deputies he lit the fire to stay warm. A statement by federal immigration authorities indicates Gonzalez is an undocumented immigrant from Mexico.

Here’s the sheriff’s statement at the press conference:

"There’s a little rumor control issue. We, the Sonoma County Sheriff’s office, arrested a man on Sunday for arson in the Maxwell Park in Sonoma. There’s a story out there that he’s the arsonist for these fires. That’s not the case. There is no indication he is related to these fires at all. CalFire is doing an investigation into how these fires started. We don’t even know if it’s arson." 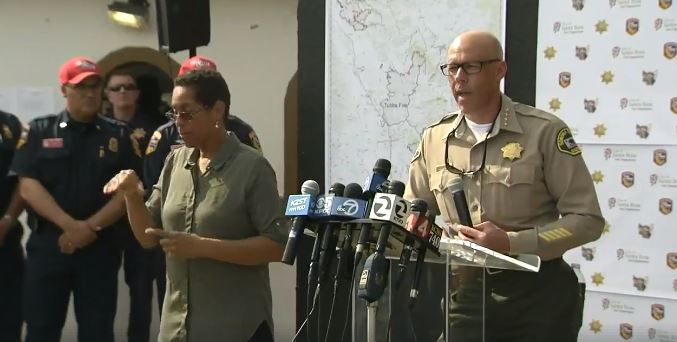 Cal Fire, or the California Department of Forestry and Fire Protection, is in charge of battling the wildfires and is the lead investigative agency.

Daniel Berlant, Cal Fire’s assistant deputy director, told PolitiFact California on Oct. 20, 2017, that its investigation was "ongoing" and that it has "not yet determined any specific causes."

He declined to comment specifically on Gonzalez, saying Cal Fire would work with the Sonoma County sheriff’s office to investigate anyone suspected in the large fires.

"There’s a lot of speculation on what may have started the fires. People want to know who is to blame," Berlant said. "When we have an arson suspect, that’s going to be made public immediately."

Berlant clarified that the agency has yet to determine whether arson is even the cause of the large fires, adding there are a host of other possibilities.

Crum told BuzzFeed on Oct. 19, 2017 that the rumors about Gonzalez are "completely false, bad, wrong information that Breitbart started and is being put out into the public in a very strong way."

Crum added in the BuzzFeed article that a Breitbart reporter called the department only to inquire about Gonzalez's race and if ICE had placed a detainer on him.

"After they published that story we started getting a lot of calls," he added. "There is no indication Mr. Gonzalez is connected to the wildfires. None. Breitbart made that up themselves."

The Breitbart reporter who wrote the article did not respond to our request for comment.

In the article, Breitbart also reported that the U.S. Immigration & Customs Enforcement Agency, or ICE, issued "a detainer request on the Sonoma County Jail" for Gonzalez.

Giordano, the Sonoma County sheriff, confirmed through a statement posted online on Oct. 19, 2017 that ICE made that request.

He added that Gonzalez remained in jail in lieu of $200,000 bail. Half of that is for a misdemeanor drug warrant from Ventura County, he said.

The sheriff also detailed what he described as several misleading comments by ICE when that agency released a statement this week about past detainer requests it made to the Sonoma County sheriff’s office related to Gonzalez.

An article on the conservative website Breitbart recently claimed that Jesus Fabian Gonzalez, who federal officials have indicated is an undocumented immigrant, "was arrested on suspicion of arson in (the) Wine Country fires that have killed at least 40 residents."

Sonoma County Sheriff Rob Giordono said deputies arrested Gonzalez for an unrelated small fire a week after the deadly blazes started. The sheriff added that "there is no indication he is related to these fires at all."

A Cal Fire spokesman said the agency has not identified an arson suspect nor has it determined whether arson was the cause of the deadly fires.

Sonoma County sheriff’s officials have pointed to Breitbart for fueling false rumors about their investigation.

At this point, there’s been no suspect identified and no arrests made tied to these deadly fires, contrary to the website’s inaccurate and irresponsible claim.

PolitiFact Rating:
False
An undocumented immigrant "was arrested on suspicion of arson in (the) Wine Country fires that have killed at least 40 residents."
Breitbart
Blog
https://www.breitbart.com/california/2017/10/17/ice-detainer-issued-for-suspected-wine-country-arsonist-in-sonoma-jail/