Cory Gardner
stated on September 24, 2017 in an interview:
North Korea is "the fifth or fourth most sanctioned nation."

Amid a war of words between the United States and North Korea, Sen. Cory Gardner, R-Colo., took to the Sunday shows to argue Washington should apply more pressure to Pyongyang.

While the United States has recently dialed up sanctions against Kim Jong Un’s regime, Gardner argued they could go further.

"(North Korea) is now the fifth or fourth most sanctioned nation," Gardner said, "meaning that we have a long ways to go to continue to ratchet up the economic and diplomatic pressure on North Korea and the enablers of North Korea."

We decided to investigate how sanctions against North Korea compare with those targeting other countries.

Rankings based on Office of Foreign Assets Control list

An aide to Gardner pointed us to a chart from a recent paper by the Foundation for Defense of Democracies. That paper, which was presented before Congress, ranks North Korea as the fourth most sanctioned country, behind Ukraine/Russia, Syria and Iran, respectively.

Rankings were derived by comparing countries according to the number of sanctioned people and entities tracked by the Treasury Department. That sanctions list is officially known as the Office of Foreign Assets Control Specially Designated Nationals list, or OFAC list.

It’s important to note that the data in the chart below was current as of Aug. 29, 2017, so it doesn’t include more recent sanctions. 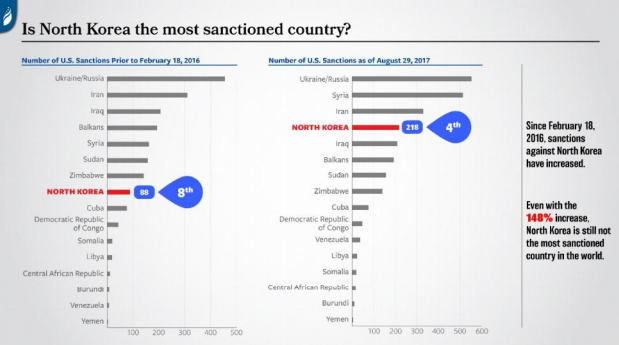 Gardner cited the above data not only to drive home his point that North Korea could be more heavily sanctioned, but also to show the impact of legislation he backed, the North Korea Policy Sanctions Enhancement Act, which took effect Feb. 18, 2016.

"Last year, when Congress passed my legislation, North Korea was the eighth most sanctioned nation on Earth," Gardner said. "As a result of that legislation, it's now the fifth or fourth most sanctioned nation, meaning that we have a long ways to go to continue to ratchet up the economic and diplomatic pressure on North Korea and the enablers of North Korea." (Note: We’re interested here in U.S. sanctions, not sanctions imposed by other countries.)

We asked the Treasury Department whether the rankings were accurate but did not receive a reply by publication time.

The limits of the OFAC list-as-ranking

Even if you assume the raw numbers are correct, several experts we spoke to thought this approach to country rankings was problematic—though some allowed that a more far-reaching measurement would be tough to calculate.

Experts’ main objection was that ranking countries based solely on the quantity of sanctions wouldn’t necessarily capture the quality, or impact, of sanctions.

"Gauging how tough sanctions are is not simply a count of measures taken, but what share of economic activity they are covering, how willing other states are to implement them, and the related ability of the country to circumvent them through evasion," said Stephan Haggard, a professor of Korea-Pacific Studies at the University of California-San Diego.

Joseph deThomas, professor of international affairs at Penn State University, said that while there is "no perfect method" for setting up a ranking system of this kind, basing it on the quantity of sanctions alone misses the mark. He suggested taking into account "the amount of financial, economic or national security pain inflicted on the sanctioned country."

"Is a country with a lot of people banned from getting visas more sanctioned than one that has one sanction on its Central Bank that denies it access to the dollar?" DeThomas said. "Not likely."

We reached out to Anthony Ruggiero, who authored the Foundation for Defense of Democracies paper, who argued the quantitative approach illuminates several key points about North Korea, relative to other sanctioned countries. He also emphasized the importance of reading the qualitative discussion of North Korean sanctions elsewhere in the paper.

"This approach verifies North Korea is not the most sanctioned county in the world, and provides a pathway toward further invest of additional sanctions against North Korea and its facilitators," he said.

Some experts acknowledged the difficulty of carrying out a more holistic approach.

"As you can imagine, such a modeling exercise is really, really hard, and a count of measures is not going to do the work," Haggard said.

Marcus Noland of the Peterson Institute for International Economics, said there are better ways of assessing sanctions impact, "but they require actual time, effort, and modeling, and honestly there isn’t much of a market for comparative sanctions analysis."

Gardner said, "(North Korea) is now the fifth or fourth most sanctioned nation."

A paper by the Foundation for Defense of Democracies ranks North Korea as the fourth most sanctioned country, behind Ukraine/Russia, Syria and Iran, respectively. According to the paper’s author, rankings were based on the Treasury Department’s list of sanctioned people and entities.

The Treasury Department did not confirm the rankings. However, experts we spoke to said ranking countries based solely on its number of sanctions was problematic because numbers alone wouldn’t necessarily capture the total impact of sanctions.

We rate this Mostly True

Email interview with Marcus Noland of the Peterson Institute for International Economics, Sept. 26, 2017

Email interview with Stephan Haggard, professor of Korea-Pacific Studies at the University of California-San Diego, Sept. 26, 2017

Interview with Anthony Ruggiero, senior fellow at the Foundation for Defense of Democracies, Sept. 26, 2017