Candidate for California governor Delaine Eastin says the state spends too much on its prisons. Associated Press file photo.

Eastin, a former state legislator and superintendent of public instruction, recently said California doesn’t spend enough on students at its K-12 schools but spends more than any state in the nation on its inmates.

"Ladies and gentlemen, you are living in the most expensive state in the union, but you are 41st in per pupil spending," Eastin claimed at a Los Angeles town hall for six gubernatorial candidates on Jan. 13, 2018.

"You should be in the top 10 not the bottom 10," she added. "But guess what, you’re No. 1 in per prisoner expenditure. That’s a disgrace. Budgets are statements of values. And to look at our budget, you’d think prisons were more important than education."

Eastin makes her claim at about the 46:00 minute mark in the town hall.

Was Eastin right about those rankings? We decided to fact check her per student vs. per prisoner spending comparison.

41st in per student spending?

To support the first part of the statement, Eastin’s campaign pointed to a January 2017 report by the California Budget and Policy Center. The nonprofit, which is described in some media reports as left-leaning, analyzes how budget and tax policies affect low- and middle-income Californians.

Its report found "California ranked 41st among all states in spending per K-12 student after adjusting for differences in the cost of living in each state." It used data from the 2015-16 fiscal year.

Jonathan Kaplan, the report’s author and a senior policy analyst at the center, told us the report applies a wage-based index to account for California’s high teacher salaries. This adjustment, he said, allows for a valid spending comparison between states that pay employees much less.

Eastin’s statement does not clarify that the 41st in the nation ranking includes an adjustment for cost-of-living. Nor does she mention that California’s per pupil spending has moved up the rankings in recent years.

The budget center is not the only group that ranks per pupil spending.

By contrast, the National Education Association conducts a straight spending comparison. It placed California’s per pupil spending at 22nd for 2015-16.

In February 2017, EdSource.org published an in-depth look at the ways California’s per pupil spending has been ranked by different groups.

It summarized its findings this way:

"Since 2011-12, the low point in funding following the 2007-08 recession, California has increased K-12 funding by more than $20 billion. As a result, its average per-student spending has significantly increased, and its ranking among the states has improved in the three most frequently cited studies.

But there’s a big variation in the state’s ranking among the three because they use different methods and different data. California has moved up some but continues to be in the bottom fifth of states, according to Education Week and the California Budget and Policy Center, while the National Education Association places California near the middle."

To support Eastin’s claim that California is "No. 1 in per prisoner expenditure," her campaign directed us to a June 2017 Associated Press article that describes those costs as "the nation’s highest." It said California’s per-inmate cost was expected to  climb to $75,560 in the next year.

In August 2017, PolitiFact California rated Mostly True Sen. Kamala Harris’ claim "it costs $75,000 per year" to lock up an inmate in the state, based in part on the AP article and state budget estimates.

The inmate drop is driven by a 2009 U.S. Supreme Court order for California to reduce prison overcrowding. California’s prison population reached a peak of 163,000 inmates in 2006, according to the Public Policy Institute of California. The state estimates it will house an average of about 119,000 prisoners this year.

Meanwhile, there’s been no corresponding reduction in prison staff as inmate number have fallen, causing per capita costs to spike.

PolitiFact California could not immediately obtain current per prisoner cost estimates for the state of New York. Various rankings have listed New York as No. 1 for per prisoner costs, including a Vera Institute of Justice report using the earlier 2015 data.

Christian Henrichson, research director at the Vera Institute, told us by email that California and New York "are neck and neck on this measure, and the answer may depend on the year studied."

While we don’t have all the exact figures, that’s a fairly safe bet.

Though per capita inmate costs continue to climb, that doesn’t mean California spends more on prisons than K-12 education, as some might take from Eastin’s claim. The reverse is correct: Gov. Jerry Brown’s current general fund budget projects spending 42 percent, or $55 billion, on the K-12 system. Meanwhile, it proposes spending 9 percent, or about $12 billion, on the prison system.

Candidate for governor Delaine Eastin recently claimed California ranks 41st in per pupil K-12 spending but is "No. 1 in per prisoner" spending.

She relied on a January 2017 policy center report that backs up the per pupil spending ranking, after adjusting for cost of living. Another ranking that makes a straight spending comparison puts California at 22nd for per pupil spending. Eastin did not make this clear in her statement nor did she note that California’s per student spending has increased in recent years.

Eastin’s claim that California is No. 1 for per prisoner costs is backed up by a 2017 Associated Press report, which listed New York a distant second. While we could not immediately find current figures for New York, we discovered that California’s per prisoner costs are expected to again rise -- to more than $80,000 -- in the next fiscal year, several thousand dollars higher than in recent years.

Overall, Eastin’s comparison is supported by recent studies. But her statement could use clarifying information.

UPDATE: After publication, we added additional context noting the U.S. Supreme Court order prevents California from automatically closing prisons even as its inmate population is reduced.

PolitiFact Rating:
Mostly True
California is 41st in the nation in per pupil K-12 spending, but "No. 1 in per prisoner" spending.
Delaine Eastin
Candidate for California governor
https://www.capradio.org/articles/2018/01/13/watch-california-gubernatorial-town-hall/ 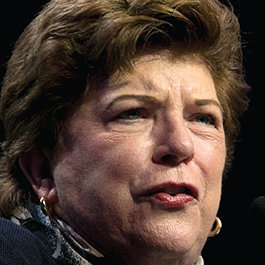 Ed Source, How does California rank in per-pupil spending? It all depends, Feb. 28, 2017