President Donald Trump wants immigrants to come based on skills, not family ties, so he’s pushing to limit the number of relatives lawful permanent residents can petition to join them in the United States.

A page on the White House website argues so-called "chain migration" is bad for the U.S. economy.

"There is general agreement amongst immigration experts that low-skilled migrants create a net fiscal deficit, creating more in government expenditures than they pay in taxes. According to one study, current immigration policy imposes as much as $300 billion annually in net fiscal costs on U.S. taxpayers," said one of the graphics posted Dec. 15. 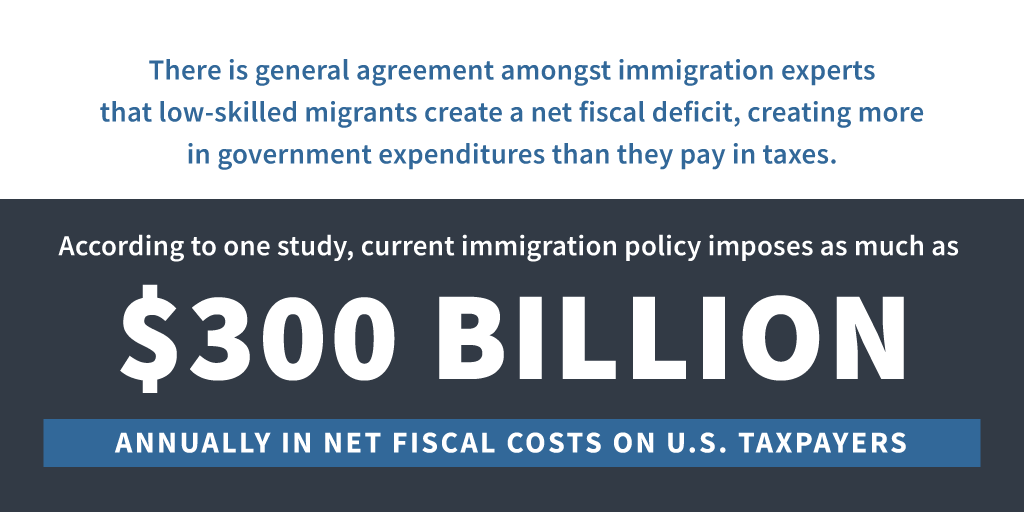 The economic impact of immigration is widely debated, but PolitiFact decided to take a closer look at the $300 billion figure.

Trump’s team highlighted a September 2016 Washington Times story headlined: "Mass immigration costs government $296 billion a year, depresses wages." It reported on a study from the National Academies of Sciences, Engineering, and Medicine on the economic and fiscal consequences of immigration.

A consultant who contributed to the report told us that in 2013 the total fiscal burden -- average outlays minus average receipts multipled by 55.5 million individuals -- was $279 billion for the first generation of immigrants. But making a conclusion on that one figure is a mighty case of cherry-picking.

The National Academies found that first-generation immigrants (who were born outside of the United States) cost governments more money than the native-born population. The costs are largely taken on by state and local governments that educate the immigrants’ children.

But members of the second generation "are among the strongest economic and fiscal contributors in the U.S. population," the report said, with tax contributions greater than their parents and the native-born population.

In the long term, the immigrant impact is "generally positive" at the federal level but remains negative at state and local levels, varying significantly across states.

"To characterize that one number as the cost to current native-born taxpayers, is absolutely a case of cherry-picking one result out of a very detailed report," said Gretchen Donehower, an academic specialist at the University of California at Berkeley and consultant who contributed to the report.

Donehower gave us three caveats to the White House’s message:

The government runs on a deficit, so on average, taxpayers, including the native-born, benefit more than they pay in taxes. While members of the first, second, and third generations on average all cost more than they pay, we are all pushing a substantial amount of debt onto future generations — and immigrants and their descendants will also be "on the hook" for that debt.

Some costs won’t go away even if immigrants do. If all of the first-generation immigrants suddenly left the country, the government wouldn’t immediately have its expense burden reduced by $279 billion. Calculations in the study included defense costs and interest on the existing public debt, which would not go down without the 55.5 million immigrants. If those costs were excluded, the total fiscal burden for the first generation and dependents would go down to $43 billion, and the per capita burden would be more for the native-born population than for the first-generation immigrants.

The overall effect of immigration on economic growth was positive. Whatever costs immigrants might present now will be "paid back" by overall economic growth that will lead to more tax revenue on average for the government and less demand for need-based benefit programs. "The $279 billion calculation does not include any estimate of this effect and so is an upper bound on total fiscal impact," Donehower said.

The study analyzed fiscal impacts using assumptions under different scenarios, which led to varying outcomes, said Chris Mackie, a study director with the Committee on National Statistics at the National Academies of Sciences, Engineering, and Medicine.

The $279 billion impact stems from the combination of worst-case assumptions, he said. Under other assumptions, the fiscal burden was $43 billion.

The point is that these numbers are estimates and depend on various factors, including immigrants’ age, education and timeframe examined.

The study also said the historical record suggests that the total net fiscal impact of immigrants across all levels of government has become more positive over time.

"The evidence does not suggest that current immigrant flows cost native-born taxpayers money over the long-run nor does it provide support for the notion that lowering immigration quotas or stepping up enforcement of existing immigration laws would generate savings to existing taxpayers," said a post on Econofact co-authored by Donehower and Francine Blau, an economics professor at Cornell University who chaired the panel that released the report.

The claim from the White House shows "a pretty misleading reading of the study," said Margaret Peters, an assistant professor of political science at the University of California-Los Angeles.

"While the first generation does impose fiscal costs, those costs are more than made up for at the federal level by the second generation (the children of immigrants)," Peters said. "On the state level, it is true that immigrants impose more of a burden in large part because they have children who go to school and states don't always recoup the costs of schooling."

The White House claimed that "current immigration policy imposes as much as $300 billion annually in net fiscal costs on U.S. taxpayers."

A study from the National Academies of Sciences, Engineering, and Medicine analyzed the fiscal impact of immigration under different scenarios. Under some assumptions, the fiscal burden was $279 billion, but $43 billion in other scenarios.

The report also found that U.S.-born children with at least one foreign-born parent are among the strongest economic and fiscal contributors, thanks in part to the spending by local governments on their education.

The statement is partially accurate but leaves out important details. We rate it Half True.

Email interview, Chris Mackie, a study director with the Committee on National Statistics at the National Academies of Sciences, Engineering, and Medicine, Jan. 10, 2018

Email interview, Gretchen Donehower, an academic specialist at the University of California at Berkeley, Jan. 13, 2018