Roy Cooper
stated on May 30, 2018 in a tweet:
"One legislative Republican’s district gets almost all the school supply funding."

Gov. Roy Cooper has repeatedly said the state isn’t doing enough to provide teachers with the supplies they need.

Classroom equipment and supply funding has fallen by tens of millions of dollars over the past decade and, in response, Cooper has pushed legislative leaders for more funding and even held his own school supply drive.

Republicans hold a supermajority in the North Carolina legislature and recently passed their budget plan mostly without the help of Democrats.

Since then, Democrats have criticized Republicans for what they see as "pork" in the budget. Cooper made one such attack on May 30, when he tweeted a graphic that reads:

"One legislative Republican’s district gets almost all the school supply funding." 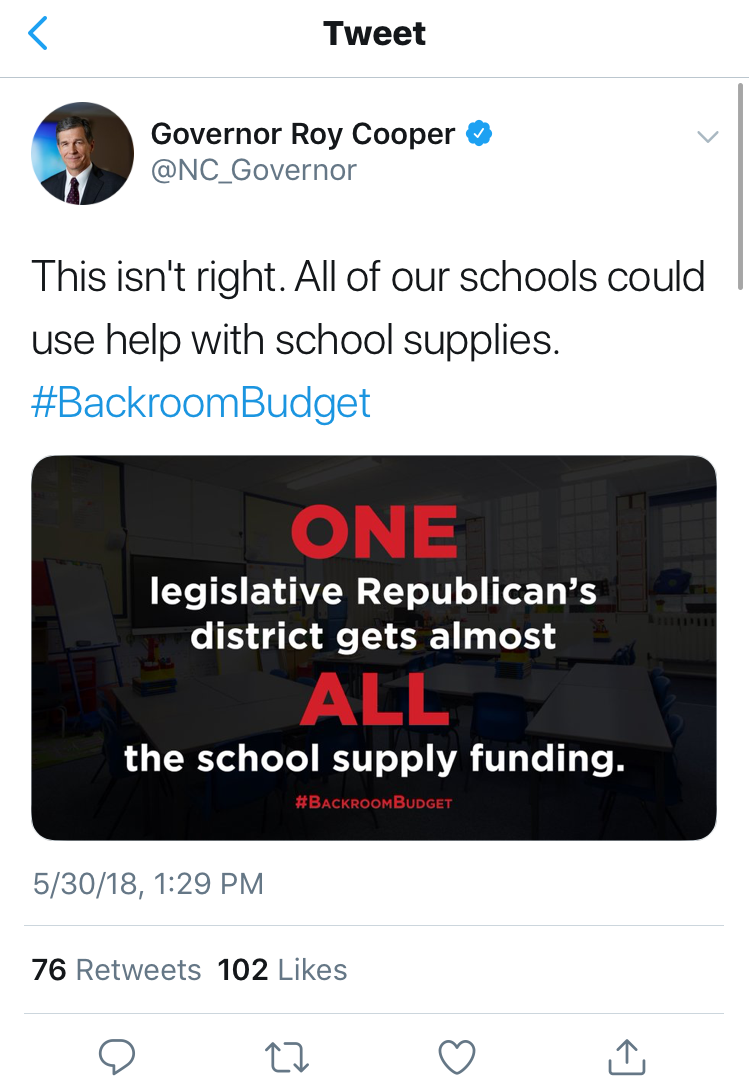 Base vs. new funding

Sadie Weiner, Cooper’s communications director, highlighted in an email a key distinction that’s not included in the tweet: It’s referring to new, additional funding — not the base budget for all school districts in the state.

"That tweet is talking about new school supply funding in the 2018-19 budget. Republicans will argue that their budget has $47 million for school supplies and instructional equipment. That is routine funding in the base budget, it is not new funding, and the Governor’s recommended budget includes the same $47 million," she wrote.

"The Governor included $15 million in new funding that would go directly to teachers in the form of a school supply stipend," Weiner continued. "That money would go to all state-funded teachers, not just those in a single district as the Republican budget has done."

She referred to Senate District 41, represented by Cornelius Republican Jeff Tarte, who faces a competitive re-election race in November. The budget includes $200,000 for DonorsChoose.org, a New York-based nonprofit. The bill instructed the group to use the money on supplies for teachers in certain schools within Charlotte-Mecklenburg Schools — all within Tarte’s district.

Donors Choose declined the money, saying the grant didn’t provide "equitable" funding across the state. The Charlotte Observer posted a story about the group’s decision less than an hour after Cooper posted the tweet.

While Cooper's tweet doesn't differentiate between base and new school supply funding, Weiner noted that Cooper was more specific in his press conference on Wednesday.

The budget, he said, "falls short on textbooks and digital learning, offers new schools supply money only to a few in-tech schools."

Jonathan Sink, an aide to House Speaker Tim Moore, said in an email that the budget provides five new grants for classroom supplies, materials and equipment. In addition to DonorsChoose, the following groups get money:

· Town of Holly Springs: $50,000 to support four programs, one of which is the Teacher Classroom Supply Program

But his tweet lacks important context, giving the impression that school districts might go without new school supplies this year — which isn’t true. We rate this claim Mostly False.

The online text of Senate Bill 99.

Stories by The Charlotte Observer, "Why are these 35 CMS schools targeted for extra money in N.C. budget? Think election," published May 29, 2018; "Charity refuses to pass NC taxpayer money to schools in one senator's district," published May 30, 2018.