Gavin Newsom
stated on March 8, 2018:
"California is 49th out of 50 in the United States in per capita housing units. Only Utah can lay claim to being lowest in per capita production."

In this photo taken Wednesday, Aug. 16, 2017, sheet metal worker Benjamin Voget prepares to install a gutter on a home under construction in Sacramento. (AP Photo/Rich Pedroncelli)

To ease extreme costs, there are politicians who say they’re increasingly focused on boosting supply. Democratic Lt. Gov. Gavin Newsom is one.

At a forum on March 8, 2018 in Sacramento, Newsom said California must break down barriers to building because it ranks "49th out of 50 in the United States in per capita housing units. Only Utah can lay claim to being lowest in per capita production."

We know building homes in California can be a long, expensive process. But does the state really have the second lowest per capita housing supply in the nation?

We opened the door on a fact check.

Newsom is the frontrunner in a crowded race for California governor.

His campaign spokesman told us the statement is supported by an October 2016 report by the McKinsey Global Institute: "A Tool Kit to Close California’s Housing Gap: 3.5 Million Homes by 2025."

We found the report — which Newsom cited later in his discussion at the forum — confirms the lieutenant governor’s claim.

Johnathan Woetzel, a director at the McKinsey Global Institute, said researchers used 2014 data from the U.S. Census Bureau in their analysis.

He said the ranking cited by Newsom compares the ratio of people to housing units in each state. That specific ranking does not measure the pace of housing production over time, as the second part of Newsom’s statement might imply. Woetzel noted, however, that California’s pace of home building has significantly lagged behind other states.

The institute is the business and economics research arm of McKinsey & Company, a worldwide consulting firm. 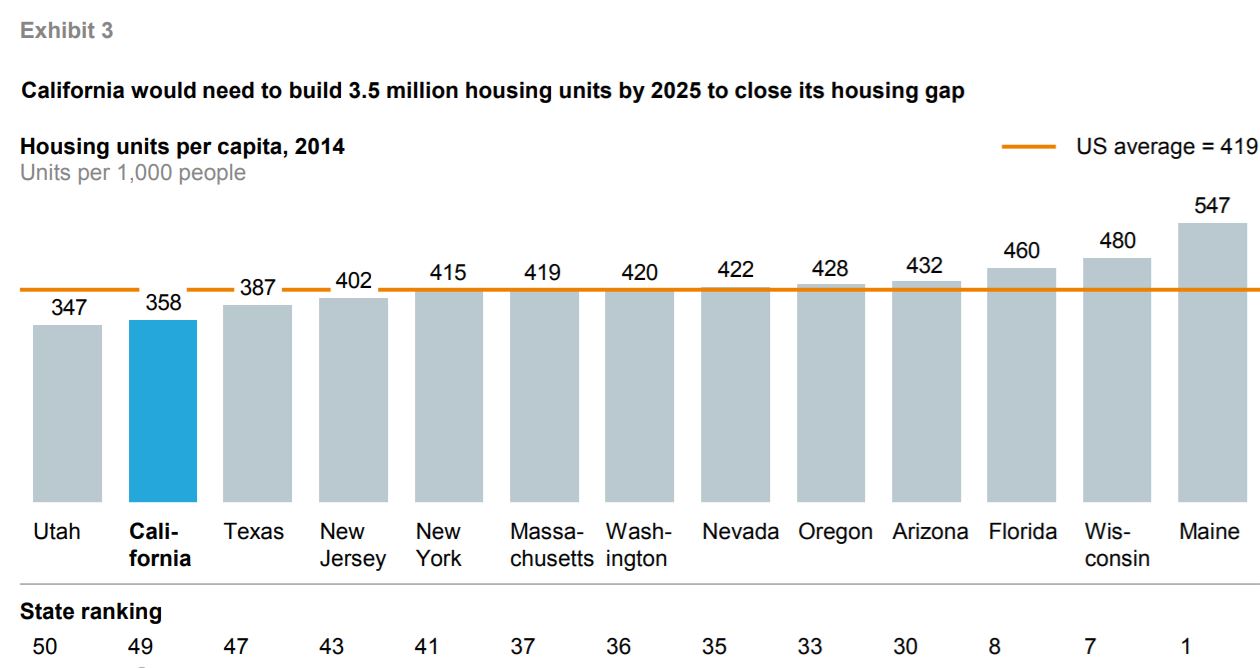 Not a new phenomenon

California has long failed to meet its housing needs, according to the report.

Two outside experts told us the McKinsey report is credible.

She said California’s housing production is stymied by the state’s complex regulatory system, including the land-use discretion of local governments, combined with the high fees developers must pay and then pass on to buyers.

"The cost of building new housing in California is very expensive," Galante said. "New development has to pay for all of its new infrastructure. That didn’t use to be the case. In the 50s and the 60s and even through the 70s, we had a state system and a federal system that paid for the suburbs to be built through a public infrastructure."

There’s also a problem on the demand side, Galante said, noting that wages aren’t keeping up with the ability to buy new homes.

Jeffrey Michael, director of the Center for Business and Policy Research at the University of the Pacific in Stockton, added that Newsom’s statement "sounds accurate," and that the McKinsey report is credible.

But we did find the total number of housing units produced in California in each year from 2014 through 2016. And based on the totals, it appears California’s rank near the bottom of per capita housing supply is accurate given the relatively slow building pace, at least compared with pre-Great Recession levels.

Those numbers are far less than California’s home building peak of 2005, when 205,000 units were added.

"Before the housing bust, the lowest year on record was 1995, during which just shy of 75,000 units were built," notes a report from the California State Association of Counties.

Lt. Gov. Gavin Newsom recently claimed California ranks "49th out of 50 in the United States in per capita housing units. Only Utah can lay claim to being lowest in per capita production."

Two independent policy experts affirmed the report and its findings showing the wide gap between California’s housing demand and supply.

We rated his claim True.

PolitiFact Rating:
True
"California is 49th out of 50 in the United States in per capita housing units. Only Utah can lay claim to being lowest in per capita production."
Gavin Newsom
Candidate for California governor

Jeffrey Michael, Director of the Center for Business and Policy Research at the University of the Pacific, interview March 20, 2018

California Department of Finance,  E-5 Population and Housing Estimates for Cities, Counties, and the State, 2011-2017 with 2010 Census Benchmark, May 2017

Los Angeles Times, Housing construction is on the rise in California, but it's still not enough, May 1, 2017