Beverly Boswell
stated on March 27, 2018 in a Facebook post:
Many March for Our Lives speakers called for "the murder of those who would not turn over their guns to the government."

Aaron Wolff, a survivor of the 2007 mass shooting at Virginia Tech, speaks during the March For Our Lives rally in Raleigh on Mar. 24, 2018.

Maddie King, who survived a shooting at Marjory Stoneman Douglas High School in Florida that left 17 people dead, called on politicians to care more about their children than their guns.

"Either represent the people or get out. Stand for us or beware: The voters are coming," Kasky said.

Thousands of Americans gathered in streets around the United States on March 24 to honor victims of gun violence and, generally speaking, to advocate for stricter gun laws.

According to a North Carolina legislator, some March For Our Lives speakers also called for a far more nefarious approach. State Rep. Beverly Boswell, a Republican from the coast, suggested on her Facebook page that speakers at the marches expressed violent intentions.

"Many of the speakers at these rallies were calling for gun registration, confiscation, Second Amendment repeal and even the murder of those who would not turn over their guns to the government," Boswell wrote on her campaign Facebook page. 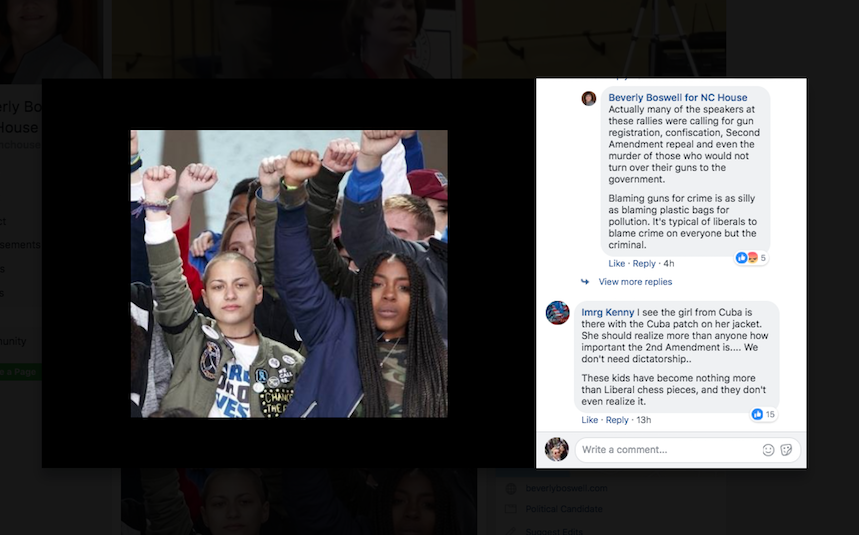 Boswell, who’s in her first term representing House DIstrict 6, has been an open critic of efforts to toughen gun laws. She recently referred to students who participated in the national school walkout as "Tide pod" eaters and boasted on Facebook about confronting a school leader who held an assembly on that day — which he says was simply to honor the victims of Parkland shooting.

She was also recently scolded by the North Carolina Board of Nursing for misrepresenting herself as a nurse.

Boswell’s comments about March For Our Lives were part of a side conversation on her Facebook page after she posted a photo of some students with the caption, "They’re out to take your guns, and our freedoms," at 8:10 p.m. on March 26. On March 27, she posted the comments about the march speakers after someone suggested Boswell’s original post was a "scare tactic" meant to distract people from the message of the march.

What the ‘march’ wants

The March For Our Lives website doesn’t say anything about forcefully taking guns from gun owners, much less harming them.

The organization says it wants universal, comprehensive background checks and a digitized, searchable database of guns at the Bureau of Alcohol, Tobacco, Firearms and Explosives (known as ATF). It also wants bans on assault weapons and high-capacity magazines, as well as funds for the Centers for Disease Control and Prevention to research gun violence.

March For Our Lives has the support of several large, liberal organizing groups that support gun control. And a survey of the Washington marchers found that protesters there were largely liberal, with 79 percent of those who were randomly surveyed identifying as "left-leaning."

But the group doesn’t appear to have ties to groups with a history of advocating violence. PolitiFact recently debunked a claim by the National Rifle Association that the March For Our Lives is "backed by radicals with a history of violent threats, language and actions."

A story by Variety.com captured some of the marchers’ public disdain for the NRA, but none of the views expressed included calls for violence.

"A video during the [Washington] event showed NRA officials, like Wayne LaPierre and Dana Loesch, as well as [the late actor] Charlton Heston, then the president of the organization, saying, ‘From my cold dead hands.’ In the crowd the images drew boos and the bird," Variety reported.

PolitiFact emailed Boswell and asked if she could provide videos or news clips showing march speakers advocating violence. Luke Stancil, her campaign spokesman, responded by referencing a candidate for sheriff in North Carolina who joked about taking people's guns.

Daryl Fisher, a candidate running for sheriff of Buncombe County in western NC, explained his views of people who invite him to pry their gun from their cold, bare hands. Stancil pointed out that Fisher shrugged said, "OK ... Whenever you pass away, we'll come get it."

Fisher indeed said those things. But he didn't say them at a March For Our Lives rally. He later apologized. And Boswell said "many" speakers called for the murder of gun owners – and didn't cite any others.

So we searched for evidence of violent rhetoric ourselves.

Alex Jones, a conservative conspiracy theorist who runs InfoWars.com, said on his show that marchers declared they would "kill anyone" who doesn’t turn in their guns.

But PolitiFact found no credible evidence of rally speakers calling for violence against gun owners who might refuse to relinquish their guns. Most speakers at the Washington march and other marches across the country spoke about stricter gun laws and warned politicians of forthcoming punishment at the ballot box.

Some of those comments, if taken out of context, could be misconstrued as threats. Delaney Tarr, a frequently-interviewed Stoneman Douglas student, said the Washington marchers are "are here to call out every single politician. We will take action where it counts."

Those comments were preceded by a specific list of legislative demands that included an assault weapons ban, the "prohibition of high capacity magazines, reinforcement of background checks and closing of loopholes."

In that vein, she said: "When they give us that inch, that bump stock ban, we will take a mile."

Alex Wind, a junior at Stoneman Douglas, used the words "life" and "death" to describe where politicians stand on gun restrictions.

D’Angelo McDade, a student from North Lawndale College Prep in Chicago and members of the student non-violence group the Peace Warriors, specifically called for non-violent action.

Speakers at marches in Boswell’s home state of North Carolina were similar. Speakers in Raleigh, Durham, Charlotte, Greensboro and Asheville reportedly focused on gun laws and the NRA.

Boswell said "many speakers" at the March for Our Lives rallies were calling for "the murder of those who would not turn over their guns to the government." She didn’t provide any evidence to back up her claim, and PolitiFact found no evidence. We rate this claim Pants on Fire.

Story by the Washington Post, "The 6 most memorable speeches at the March for Our Lives in D.C.," published March 24, 2018.

Fact check by PolitiFact, "NRA says violent radicals are behind the March For Our Lives," published March 23, 2018.

Story by Media Matters For America, "Alex Jones: March For Our Lives protests are part of a plot to overthrow the U.S. government and kill gun owners," published March 26, 2018.

Story by Variety, "March for Our Lives: Protesters Flood Streets Across the Nation to Rally Against Gun Violence," published March 24, 2018.

Story by Buzzfeed, "The Parkland Teens Fighting For Gun Control Have The Backing Of These Huge Organizing Groups," published Feb. 27, 2018.

Story by The Durham Herald-Sun, "Thousands rally at CCB Plaza in Durham's 'March For Our Lives' event," published March 24, 2018.

Story by The Greensboro News & Record, "'This day belongs to us’ Students swell the streets of Greensboro to take a stand on stricter gun laws," published March 24, 2018.