Greg Casar
stated on May 8, 2018 in an Austin American-Statesman news story:
Says Austin has "been ranked repeatedly as one of the most, if not the most, economically segregated cities in the country."

An official concerned about government not enforcing fair housing regulations says Austin has long been known to be a city divided.

Greg Casar, who represents District 4 on the Austin City Council, told the Austin American-Statesman in May 2018: "We do have a really serious problem in Austin. We’ve been ranked repeatedly as one of the most, if not the most, economically segregated cities in the country."

Economic segregation can briefly be defined as residential division by income.

And has Austin repeatedly been ranked high by that metric?

To our request for elaboration, Shelby Alexander in Casar’s council office said by email that three recent studies classified Austin as economically segregated to a great degree.

A February 2015 study, explored at the time in an American-Statesman news story, ranked the Austin-Round Rock-San Marcos area the country’s most economically segregated large metro area.

That study, overseen by Richard Florida for the University of Toronto-based Martin Prosperity Institute, evaluated the nation’s 350-plus metro areas based on individual and combined measures of income, educational and occupational segregation plus an overall economic segregation index. The study ranked Austin first for economic segregation among metro areas with populations of 1 million or more. The San Antonio area ranked third, the Houston area was fourth and the Dallas area was seventh.

Among all U.S. metros, the study found the Tallahassee and Trenton areas to have the greatest economic segregation, followed by the metro areas of Austin, Tucson, San Antonio, Houston, Ann Arbor, Bridgeport and Los Angeles: 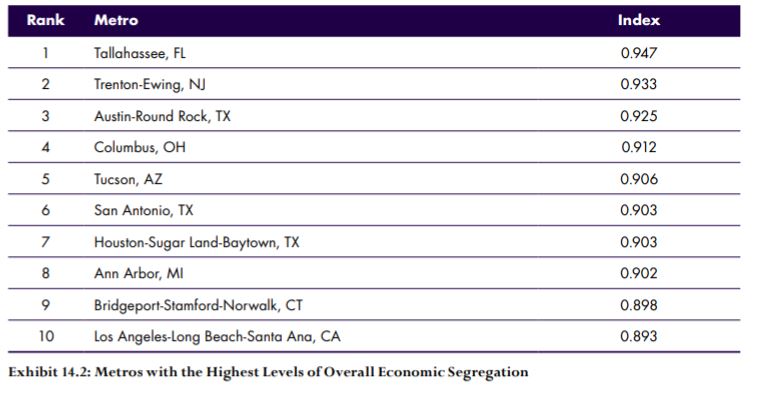 We followed up with Florida, who pointed us by email to his 2017 book, "The New Urban Crisis," in which Florida says that since 2003, he’s explored his finding that the country’s "creative cities" including Austin double as "epicenters of economic inequality."

"Austin," the book says, "is divided east to west… Its creative class is concentrated in a huge wedge to the west that runs from downtown through its high-end suburbs out to Round Rock and in another separate bloc in the far southeastern portion of the metro. Austin’s downtown has seen substantial revitalization, including the development of large amounts of new housing. The service-class and smaller working-class areas are massed entirely in the more disadvantaged areas of the east."

Also pointed out by Casar's aide: A 2017 study funded by the Urban Institute presenting economic segregation indexes for the 100 most populous U.S. "commuting zones" (similar to metro areas) as of the 1990 census.

From 1990 through 2010, the report says, Austin ranked among a dozen communities consistently placing in the top quarter of the nation’s economically segregated areas. But as of 2010, 10 of the 12 areas had greater  eco-segregation, the report says: New York; Charlotte, N.C.; Kansas City; Philadelphia; Louisville; San Francisco; Nashville; Dallas; St. Louis; and Washington, D.C.

Alexander also noted an April 2018 institute report ranking cities--not metro areas--by income and racial inclusion. By email, the institute’s Christina Stacy answered our inquiry by confirming that in 2013 by the institute’s analysis, Austin was outpaced for "income segregation" by only nine of 274 cities. 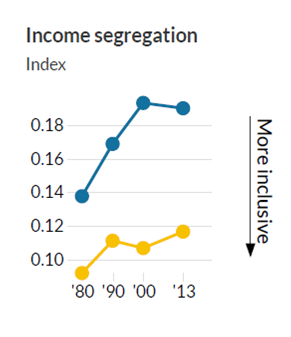 "Although Austin ranks as highly segregated," Stacy wrote, "it did improve on segregation between 2000 and 2013 while most other cities worsened. So, it has shown some improvement, but is still toward the bottom of the pack."

Another expert, Brown University sociologist John Logan, answered our inquiry with an email pointing out research placing the Austin area in 2010-14 16th among the nation’s most populous cities and 17th among all evaluated metro areas for economic segregation.

Logan, presented with Casar’s claim, commented that the "Austin metro is on the high end, but not so high as to merit the characterization as ‘one of the most, if not the most, economically segregated cities in the country.’"

"The general point is that all U.S. metro areas are highly segregated by income," Logan wrote, "and that has consequences for the lives of residents."

We circled back to Casar, who agreed in replies emailed by his office that Austin’s level of economic segregation might be decreasing and that no study placed Austin by itself No. 1 by that metric.

"You could see how looking beyond the city proper makes sense," Casar replied. "Consider, for example, that it’s commonplace for smaller municipalities within a larger metro area to show segregation, with some predominantly higher income and others predominantly lower income. It's also a problem that some central city neighborhoods see higher income people leave to suburbs nearby, thereby exacerbating segregation. It's also common for some lower income people to be pushed out of city limits, further away from services, also exacerbating segregation."

Casar said Austin has "been ranked repeatedly as one of the most, if not the most, economically segregated cities in the country."

Austin and the Austin region have repeatedly been ranked among the nation’s most economically segregated areas.

We didn’t find a ranking that placed the city or area No. 1 by this indicator though the University of Toronto study ranked the Austin area first among areas of 1 million residents or more. In that analysis, the Austin area landed third overall.

PolitiFact Rating:
Mostly True
Says Austin has "been ranked repeatedly as one of the most, if not the most, economically segregated cities in the country."
Greg Casar
Austin City Council member, District 4
https://www.mystatesman.com/news/local/austin-nonprofits-sue-hud-carson-after-changes-fair-housing-rules/sz8TeH67Q2OpihvHNY7Z5M/