Did Dino Rossi, a Republican Washington state senator running for U.S. Congress, once take away coverage from 45,000 children?

That’s what an attack ad by the House Majority PAC claimed.

"He’s back. Dino Rossi," the voiceover in the ad says. "Rossi first showed up in Olympia decades ago. He went to work! Health care stripped from 45,000 children."

They’re referencing a 2003 budget measure, back when Rossi was the state Senate Ways and Means chairman.

The budget was looking bleak, so Republicans proposed large spending cuts that year. One, proposed by Rossi, was a $50 million cut in Medicaid spending. The cut would have eliminated coverage for nearly 40,000 low-income children, according to reporting at the time.

But the cut didn’t fly with Democrats, and ended up being scrapped in the final budget. The final budget, which won bipartisan support, wasn't a specific cut, but it did include rules changes. Those changes ultimately resulted in the loss of coverage for 45,000 kids on Medicaid.

While it didn’t change any of the eligibility requirements, the budget changed state Medicaid policy in a way that lead to an enrollment decline later reported by state health care agencies. We were unable to trace this measure back to Rossi himself, but he did vote in its favor.

First, it ended continuous eligibility, which meant if a family’s income was over the income standard, the child’s medical coverage would end. Second, certification periods went from every 12 to every six months. A signature became necessary for renewal, ending telephone renewals. Third, it adopted new income verification requirements; while it previously accepted a family’s statements, it now verified the information provided through available databases.

"These changes were requested by the legislature and they did have the impact of reducing the children’s caseload by at least 45,000," said Amy Blondin, chief communications officer for the Washington State Health Care Authority.

Andrew Bell, spokesman for Dino Rossi, said the changes Rossi pushed forward in the budget ensured resources were given to the neediest families.

"So it seems like the HCA is saying that that was a combination of families who were making enough money to afford healthcare themselves moved off of Medicaid coverage, and a reduction in wealthy families who were cheating the system and taking health care from poorer families," Bell said. "Either way, this seems to leave more resources available for truly needy families (which is the standard we've always used)."

That’s one way to interpret the drop.

"In fact, only about 20 to 30 percent of the children removed are ineligible for Medicaid," the report read. "Most are eligible but are inhibited from getting coverage because of the administrative barriers and hurdles described above."

When the first two rules changed back (and income verification stay put) in 2005, the numbers mostly returned to normal. 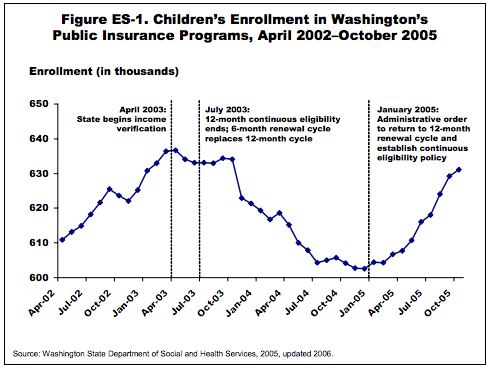 "I don’t think that ‘wealthy’ families were taking advantage of the program given the bounce back in enrollment," said Tricia Brooks, senior fellow at Georgetown University’s Center for Children and Families.

Rossi wasn’t solely responsible for the move, but he did support it. The 2003 Washington state Senate budget measure he voted for increased administrative hurdles for children seeking Medicaid coverage. Most of the eligible children regained coverage when the rules changed back in 2005.

Kaiser Family Foundation, Medicaid and the 2003-05 Budget Crisis― A Look At How Washington Responded, Aug. 2005

Working for Health Coalition, WRONG TARGET: Policies That Hurt Kids And Cost Us All More, April 2004

The Commonwealth Fund, Instability of public health insurance coverage for children and their families: causes, consequences, and remedies, June 2006