Here’s what they left out in the process: the fact that Trump wasn’t clearly talking about asylum seekers. His "animals" comment came nearly a year ago during a White House discussion on MS-13 gang members.

It started April 5, when the Twitter account @markmobility, owned by a man named Mark Elliott, tweeted a 47-second video of Trump in which he talks about people coming into the United States and says the word "animals." The since-deleted tweet said of the video: "[email protected] on people asking for asylum ‘These aren't people. These are animals’." 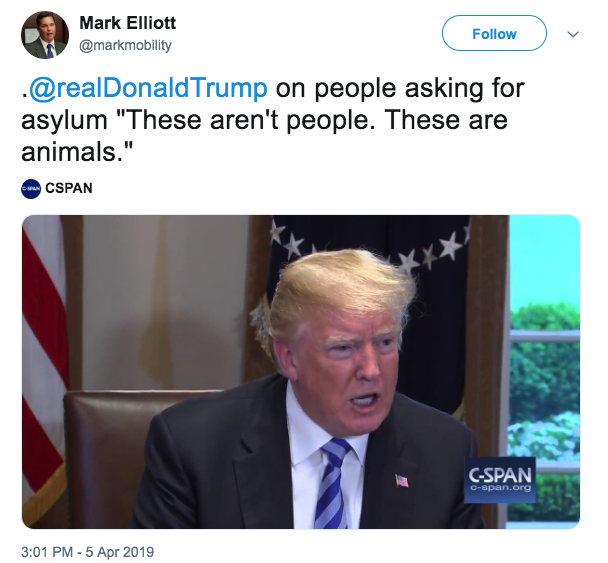 Sen. Kirsten Gillibrand of New York, who is running for president in the 2020 election, shared the video on her Twitter account the next day, adding, "Racist language like this has led to violence throughout the world’s history. No human being is an animal. We have to be better than this."

Racist language like this has led to violence throughout the world’s history. No human being is an animal. We have to be better than this.https://t.co/TQ0MhJFGtq

South Bend, Ind., Mayor Pete Buttigieg, also bidding for the White House, did not post the video on his Twitter account; but on April 6 tweeted, "You do not refer to human beings as animals. You just don’t."

Now, Trump’s recent comments about asylum-seekers have been tough. He has said "the asylum program is a scam" and that the administration’s new position is "the system is full, can’t take you anymore." Most people arriving at the border are families and unaccompanied children, but Trump claims some asylum seekers are "some of the roughest people you’ve ever seen, people that look like they should be fighting for the (Ultimate Fighting Championship)."

Still, the Democrats left out important context in their attacks on this video clip of Trump speaking last year.

Trump made the "animals" remark in May 2018 during an immigration roundtable discussion on so-called sanctuary cities, MS-13 gang members, and other policies around the country regarding the detention of immigrants. Cabinet members, California sheriffs and other elected officials attended the meeting.

Trump’s comment came in response to Fresno County Sheriff Margaret Mims, who was telling the president how federal laws and California laws affected her job.

Here’s the key part of their exchange, with Trump’s quote in bold for emphasis:

Mims: "So here we are, stuck in the middle, trying to decide. We have federal law, we have state law. And that's why I welcomed Attorney General Sessions's lawsuit, because that will provide us the clarity that we need and direction that we need. What do we do? Because here we are.

"The dumbest laws, as I said before, the dumbest laws on immigration in the world. So we're going to take care of it, Margaret. We'll get it done."

The video clip captured in @markmobility’s tweet (which had garnered more than 14,000 retweets and 23,000 likes before it was taken down) did not include the preceding comment from the sheriff about MS-13 gang members, making it look like Trump was broadly referring to immigrants.

Since Trump did not specifically mention MS-13 in the same breath, some Democrats at the time interpreted him as saying all immigrants are animals. This led to a spat between Trump and Nancy Pelosi, now U.S. House speaker, in which Trump falsely said she came out "in support of MS-13" when she condemned his comments.

PolitiFact reached out to @markmobility on Twitter on April 8, saying we were fact-checking his tweet and requesting his contact information so we could send a query. The biography section of his Twitter page does not identify his occupation or other contact information (it links to the New York Times). We separately sent a detailed email and voicemail to a Mark Elliott, who appears to be the person behind @markmobility. We did not hear back.

Less than an hour after our voicemail and email noting the context of Trump’s comment, @markmobility deleted the April 5 tweet and posted a new clarifying tweet.

"I have learned that Trump's comments were in response to a specific question about MS-13 members and not about asylum seekers more broadly. I have chosen to delete the tweet, but am copying it here. My apologies for not being more accurate," @markmobility’s tweet said.

I have learned that Trump's comments were in response to a specific question about MS-13 members and not about asylum seekers more broadly. I have chosen to delete the tweet, but am copying it here. My apologies for not being more accurate. pic.twitter.com/oDTdNvzSdq

The tweet left out important context. Trump did refer to some people as "animals," but that was during an exchange about MS-13 gang members. His comment wasn’t directly about asylum seekers.

PolitiFact, In Context: Donald Trump's comments about immigrants, ‘animals’, May 17, 2018