Nick Schroer
stated on February 12, 2019 in a podcast:
"There are statistics out there that show the number of women who died from illegal abortions prior to Roe v. Wade, that number has skyrocketed since with women dying more with legal abortions."

On an episode of Politically Speaking, a podcast from St. Louis Public Radio, O’Fallon Rep. Nick Schroer spoke about legislation he sponsored known as the "Missouri Stands for the Unborn Act". The bill, which would ban abortion once a fetal heartbeat or brain activity is detected, is considered one of the "strongest pro-life" bills in the nation.

Interviewer Jason Rosenbaum asked Schroer how he responds to opponents of his bill who say this will prompt women past the 6 to 8 week mark in their pregnancy when a heartbeat or brain activity could be detected to obtain a dangerous abortion.

Schroer responded by saying statistics that measured the number of women who died from illegal abortions prior to the nationwide legalization of abortion in Roe v. Wade in 1973 were fabricated and overestimated.

Schroer said, "There are statistics out there that show the number of women who died from illegal abortions prior to Roe v. Wade, that number has skyrocketed since with women dying more with legal abortions."After further investigation, we found that Schroer’s claim was misleading.

What makes a woman

We reached out to Schroer to find out where he got the information about the number of women dying from legal abortions.

In his reply, Schroer said, "This quote was meant to pull in the numbers of female babies as well."

"Since Roe v. Wade, the number of babies killed, male and female, has skyrocketed per this information. Whether mother or female baby, the amount of life lost as a result of abortion since Roe has skyrocketed," he said.

None of that is clear from Schroer’s answer on the podcast, and it has nothing to do with the question he was asked -- which was about pregnant women.

A brief history of abortion

Karissa Haugeberg, assistant professor of history at Tulane University, said, "It can be difficult to get at precise deaths due to illegal abortions because many physicians and pathologists obscured the cause of death on death certificates to protect providers and women’s families."

Many of these deaths would be reported as a miscarriage or other complication in the pregnancy.

The Guttmacher Institute outlines the number of abortion deaths prior to Roe v. Wade, with abortion being the official cause of death for almost 2,700 women in 1930, 1,700 women in 1940 and over 300 women in 1950. The institute also says the actual number was likely much higher. 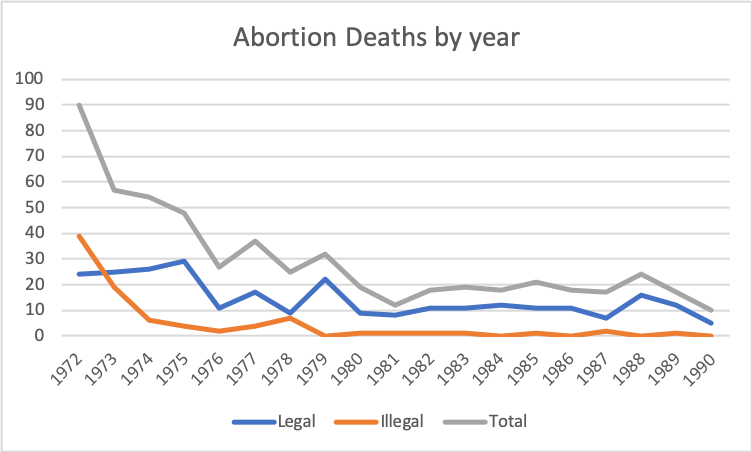 According to the CDC, "in 2014, the most recent year for which data were available, six women were identified to have died as a result of complications from legal induced abortion."

Schroer said he was talking about pregnant women and female fetuses, though that wasn’t the question he was asked and is extremely misleading to listeners. The number of women who have died from abortions has steadily decreased, even prior to the decision in Roe v. Wade.

We rate this claim Pants On Fire.

Rachel Benson Gold, Guttmacher Institute, "Lessons from Before Roe: Will Past be Prologue?" March 1, 2003, accessed April 16, 2019

Nick Schroer
stated on February 12, 2019 a podcast:
"There are statistics out there that show the number of women who died from illegal abortions prior to Roe v. Wade, that number has skyrocketed since with women dying more with legal abortions."

Mike Parson
stated on January 16, 2019 his state of the state speech:
"We maintain this (Missouri highway) system with one of the lowest levels of funding in the country."