Mark Walker
stated on November 27, 2019 in a tweet:
Says the cartels are so bad in a Mexican border state that the U.S. government issued a ‘Do Not Travel’ warning -- the same warning it issued for Syria.

U.S. Rep. Mark Walker, a Greensboro Republican, tweeted a thank you to President Trump on Nov. 27. 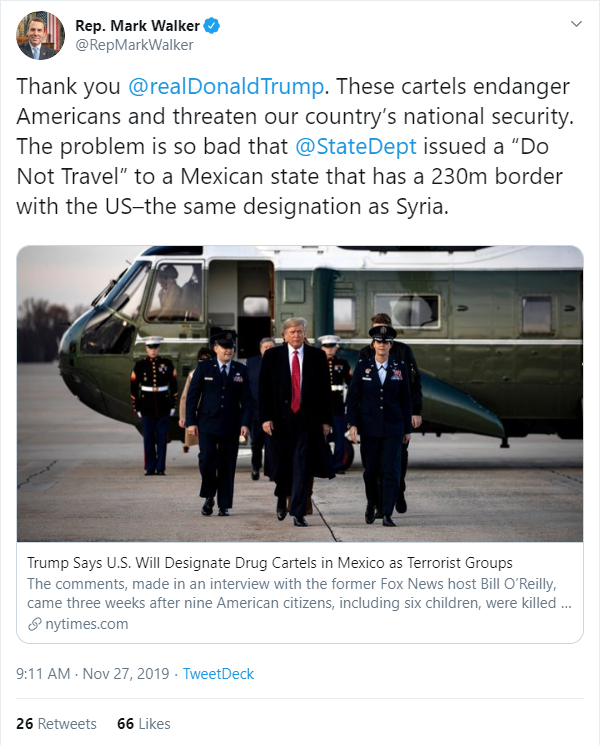 "Thank you @realDonaldTrump. These cartels endanger Americans and threaten our country’s national security. The problem is so bad that @StateDept issued a "Do Not Travel" advisory to a Mexican state that has a 230m border with the US–the same designation as Syria," Walker tweeted.

Walker, who has 26,000 Twitter followers, tweeted his comments in reaction to a story about the U.S. designating drug cartels as terrorist groups. But Walker’s claim — about a Mexican state having the same travel warning as Syria — isn’t addressed by the New York Times story he tweeted.

So we wondered whether the claim by Walker was true. And, from our research, he’s on-point.

Did the U.S. government issue a "Do Not Travel" advisory for a Mexican state?

Did the U.S. government issue the same travel advisory for Syria?

And how long is that Mexican state’s border with the U.S.?

The State Department considers Mexico as a whole to be a Level 2 country, meaning travelers should "exercise increased caution." The department also assigns advisory levels to individual states. Five states are at the "do not travel" level: Colima, Guerrero, Michoacan, Sinaloa, and Tamaulipas.

Only one Level 4 state, Tamaulipas, shares a border with the United States. And it is known for being dangerous.

The Associated Press has described the Tamaulipas as a "lawless border state." The state department website says this about the area:
"Violent crime, such as murder, armed robbery, carjacking, kidnapping, extortion, and sexual assault, is common. Gang activity, including gun battles and blockades, is widespread. Armed criminal groups target public and private passenger buses as well as private automobiles traveling through Tamaulipas, often taking passengers hostage and demanding ransom payments."

As it turns out, Tamaulipas has the same travel advisory as Syria.

Length of the border

Walker’s tweet about the length of the border — 230m — might give readers pause. The letter "m" is an abbreviation for a meter of length. A meter is about 39 inches. So, at first glance, one might think Walker was referring to a border slightly longer than two football fields.

But, given the U.S. isn’t on the metric system, it’s more likely that Walker was referring to miles. And indeed that was the case, according to spokesman Jack Minor.

(Quick fact: the correct abbreviation for a mile is "mi," according to Dictionary.com.)

Asked for the source of Walker’s information, Minor emailed a link to a 2012 McClatchy DC story, "Along Mexico border, drug taint on politicians lingers."

The second paragraph describes Tamaulipas as "a muggy Gulf Coast state that shares a 230-mile border with Texas and is a major conduit for licit and illicit trade." And that length estimate checks out. A page found on the Mexican government website describes the Tamaulipas-U.S. border as being 370 kilometers, which is equal to 230 miles.

Walker said Mexican cartels are so bad that the U.S. "issued a ‘Do Not Travel’ to a Mexican state that has a 230m border with the US–the same designation as Syria."

That state is Tamaulipas. It has the same "Do Not Travel" advisory warning as Syria. And the border is roughly 230 miles long. We rate this claim True.

Story by the Associated Press, "Migrants stuck in lawless limbo within sight of America," posted March 17, 2019.

The U.S. Department of State’s travel advisory for Mexico, listed on the department’s website.

The U.S. Department of State’s travel advisory for Syria, listed on the department’s website.

Archived page found on the Mexican government website that describes the Tamaulipas-U.S. border as being 370 kilometers, which is equal to 230 miles.