Jeff Jackson
stated on December 3, 2019 in a tweet:
Says North Carolina's average teacher salary was at the national average "back when I was in public school."

NC Sen. Jeff Jackson, a Democrat, speaks at the capital in Raleigh.

Democratic Gov. Roy Cooper this year vetoed a state budget proposed by the GOP-controlled legislature, saying it didn’t do enough for teachers.

Republicans, meanwhile, have questioned Cooper’s commitment to teachers. They’ve suggested that, if he cared about them, he wouldn’t have blocked raises that were included in their proposed budget.

And so the blaming and posturing has gone on for months now, with each side blaming the other for this year’s budget stalemate.

"We need to raise NC teacher pay to at least the national average - which is where it was back when I was in public school," Jackson tweeted. 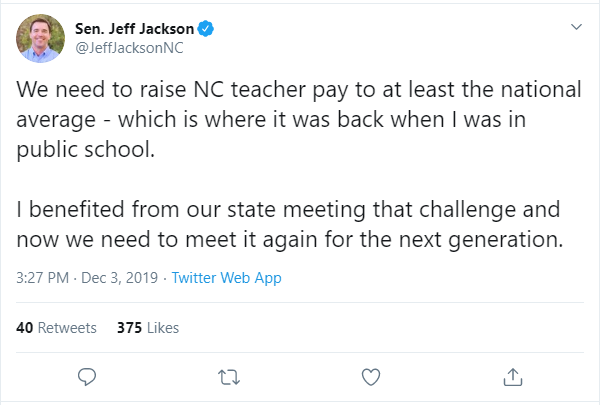 Jackson’s tweet appears to claim that, during his time in the public school system, North Carolina’s average teacher salary was on par with the average salary for all of the nation’s teachers.

(Jackson says that’s not what he meant by "average," and we’ll get to his argument later.)

Jackson said he finished high school in the year 2000. So we looked at that year, the 1990s and into the 1980s. Turns out, the good old days weren’t so good after all.

Our primary source was the National Education Association, which is known for releasing annual reports detailing the average annual teacher salary in each state. (In March, the organization estimated NC’s average teacher pay at $53,975 for the 2018-2019 school year, WRAL reported.) 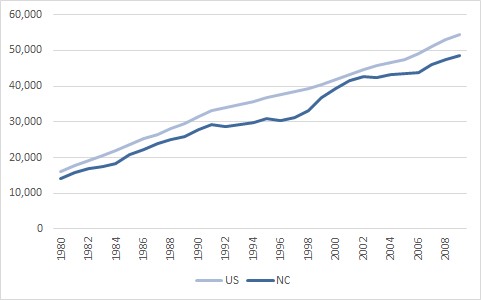 The National Center for Education Statistics also tracks teacher salaries for the U.S. Department of Education. For the 1990s to 2000, the NCES had similar numbers to the NEA.

The data is "spotty" for older years, according to Tom Snyder, the NCES director of annual reports and information staff. But, for the years NCES does have, Snyder said "North Carolina is lower than the national average."

We also reached out to the North Carolina Association of Educators, a left-leaning advocacy group for teachers. Kevin Rogers, the group’s government relations and communications manager, said North Carolina has "never quite hit" the national average.

Rogers’ mention of rankings takes us to Jackson’s argument.

So far, we’ve been comparing NC’s average pay to the nation’s average pay. But when we reached out to Jackson, he said he used the word "average" to compare NC to other states — not the average (or mean) salary for the country as a whole.

"We were above average (U.S. teacher pay) in my senior year of high school, understood as the median rank for all 50 states."

But, there are a couple problems with Jackson’s reasoning.

Second, his explanation suggests that average pay refers to the "median rank for all 50 states." But that’s not how the average teacher pay is determined. It’s determined by looking at average pay across the country -- not by taking the median salary of the states. Being above the middle value in a list isn’t the same as being above average.

Jackson told us that the difference between what his tweet says and what he meant is a matter of semantics. In this context, however, the word "average" has a very specific meaning.

We asked Kris Nordstrom, a senior policy analyst for the liberal NC Justice Center, about how he’d interpret someone saying they "want to raise NC’s teacher pay to the national average." Nordstrom has done extensive research on the topic. He said, "I would interpret that as wanting to bring the state’s average salary to the same level as the nation’s average salary."

Jackson said North Carolina needs "to raise NC teacher pay to at least the national average -- which is where it was back when I was in public school." Jackson told us he graduated high school was 2000, so we looked at that year and the preceding decade.

And we found no evidence that NC’s average teacher pay ever matched the national average.

Jackson said he used the word "average" as a reference to the median salary among all 50 states. There’s some validity to his claim that, generally speaking, NC could be seen as faring better than most other states for a couple years.

But this argument strays from his original tweet, which made no mention of NC’s rank, median pay or how its pay compared to other states. We rate the tweet False.

A tweet by NC Sen. Jeff Jackson, a Democrat who represents Charlotte.

Email correspondence with Mark Jewell, president of the NC Association of Educators.

Email correspondence with Graham Wilson, spokesman for the NC Department of Instruction.

Email correspondence with Tom Snyder, director of annual reports and information staff for the National Center for Education Statistics.

Statistics about teacher pay in North Carolina during the 1999-2000 school year on the NC Department of Instruction website, retrieved using the "Wayback Machine" internet archive.

Jeff Jackson
stated on December 3, 2019 a tweet:
Says North Carolina's average teacher salary was at the national average "back when I was in public school."

Mark Jewell
stated on May 1, 2019 a tweet:
Photo shows a sea of red-clad education advocates covering most of the Halifax Mall.

Quentin Miller
stated on February 26, 2019 a speech:
Says an ICE detainer request "is not a valid warrant."