In the wake of Pamela Karlan’s impeachment hearing testimony, some social media users have seemingly attempted to discredit the Stanford law professor by connecting her to images of other women online.

We’ve already debunked a viral post that claims a photo of a woman in a costume holding the sign "vagina lady" is Karlan. Other fact-checkers have found another post misidentifying a woman wearing a pink crocheted hat during the 2017 Women’s March on Washington as Karlan. Now a Dec. 5 Facebook post claims to show a photo of "Pamela Karlan when Hillary lost."

The woman the post identifies as Karlan appears upset and is wearing an Uncle Sam-style hat and Hillary Clinton’s 2016 campaign logo. But the person in the image is actually Janna DeVylder, who was photographed at an election party in Australia that year. 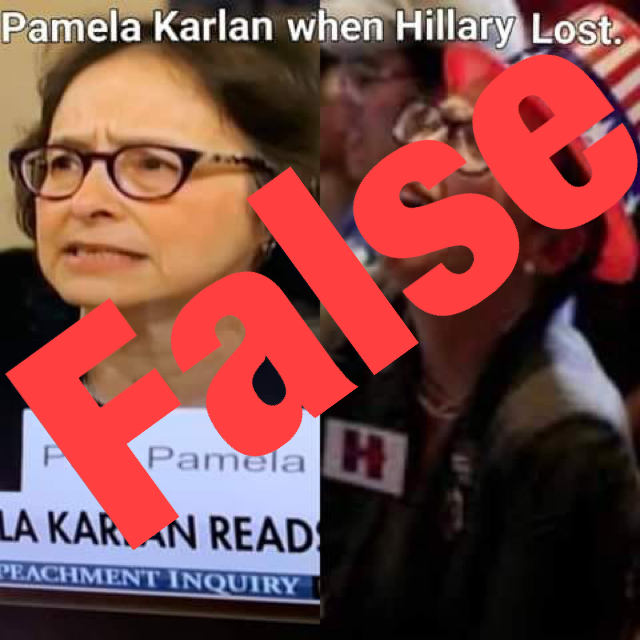 The Des Moines Register reported in January 2017 that DeVylder grew up in Iowa and was living and working in Sydney when Clinton lost to Trump. She had voted absentee for Clinton. The picture of her watching election results quickly became a meme, and she was derided online as the "poster child for the mentally insane Hillary snowflakes."

PolitiFact, No, viral photo of woman on costume is not law professor Pamela Karlan, Dec. 13, 2019

AP News, Photo does not show professor who testified in impeachment hearing, Dec. 6, 2019

The Des Moines Register, How a ‘crying liberal’ became global meme for those gloating over Trump win, Jan. 15, 2017

Viral image
stated on July 20, 2022 an Instagram post:
A Texas farmer was “arrested for using illegal immigrants for free labor by pretending to be Joe Biden.”

Viral image
stated on July 12, 2022 a Facebook post:
Photo shows a woman who is wanted for impersonating a nurse and kidnapping an infant from a local U.S. hospital.