Chuck McGrady
stated on February 13, 2019 in a press conference:
Says "nearly half" of House Republicans have supported a nonpartisan redistricting bill.

NC Rep. Chuck McGrady advocates for his nonpartisan redistricting bill during a press conference on Feb. 13, 2019 (Will Doran/News & Observer)

There’s more support for redistricting reform than meets the eye, according to one North Carolina legislator.

For decades, North Carolina’s election maps have been criticized as biased toward whichever party controlled the legislature when the maps were drawn. And currently, the state faces four different legal challenges to its maps.

So Rep. Chuck McGrady, a Republican from Henderson County, hopes the legislature will change its ways before the maps need to be redrawn in 2021. On Feb. 13, McGrady introduced a bill that would shift redistricting responsibilities from the legislature to a committee of non-politicians.

Given GOP legislators have controlled the state House and state Senate since 2011, it may seem like Republicans aren’t interested in redistricting reform. But that’s not so, McGrady claims.

"In my caucus, nearly half of the Republicans now serving have voted for this type of bill … or have cosponsored one or more of the nonpartisan redistricting bills," McGrady said Wednesday during a press conference.

There are currently 65 Republicans in the House. For McGrady’s claim to be correct, about 33 of them need to have previously supported a redistricting bill.

How close does McGrady come? If we’re talking about House Republicans who supported bills before 2019, McGrady comes up a little short – something he realized when contacted by PolitiFact.

McGrady said he got his information from Bob Phillips, executive director of Common Cause NC, a left-leaning voting rights advocacy group. McGrady miscounted the number of legislators who previously supported nonpartisan redistricting, he said in an email.

"I didn’t realize I was double counting some members since they were included both as voting for a bill and cosponsoring one or more bills," McGrady said, referring to a list he was given.

It’s also important to note that Republicans who previously supported a nonpartisan redistricting bill aren’t necessarily going to support it this year.

Still, McGrady’s not that far off. His prediction comes close, but only because of Republicans who support his bill this year.

Among the bills McGrady mentioned in his press conference was House Bill 824, a bill introduced in 2011 that would’ve created a nonpartisan redistricting process.

Five current House members were among the bill sponsors:

Ten more voted for the bill at least once:

That makes 15 Republican legislators who voted on HB 824.

In 2013, a bipartisan group of legislators filed another nonpartisan redistricting bill.

The bill, HB 606, was never put up for a vote. But several Republican supporters of the 2011 bill sponsored HB 606, as well as these six other Republicans:

So far, that puts our count of nonpartisan redistricting supporters at 21 Republicans.

In 2015, HB 92 sought to form a nonpartisan redistricting commission. It was never voted on, but several current Republicans supported it, including John Fraley of Iredell County and Lee Zachary of Yadkin.

A similar bill, HB 200, was introduced in 2017 and never voted on. Cody Henson of Transylvania County was among a handful of Republican sponsors.

By our count, 24 Republican House members supported nonpartisan redistricting bills before this year.

That brings us to 2019 and the bill McGrady just introduced, HB 69. It’s sponsored by eight Republicans who weren’t already on our list:

(Goodwin, Hanig, Ross and Sasser added their names to the bill after McGrady’s press conference.)

But, when you consider Republican support for his new bill, he’s pretty much right that nearly half of House Republicans have supported the idea of nonpartisan redistricting at some point. We rate this claim Half True. 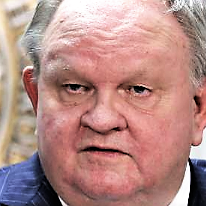 Video provided by Will Doran, reporter for the News & Observer.

Email correspondence with Bryan Warner, director of communications for Common Cause North Carolina.

A pledge to Common Cause NC to "support the creation of an independent, nonpartisan redistricting process for congressional and legislative districts in the upcoming 2019 legislative session.

Story by The News & Observer, "This session might be the best chance in the next decade to end gerrymandering," published Feb. 13, 2019.