Ted Budd
stated on January 9, 2019 in a tweet:
Says there are "2,000 inadmissible migrants arriving every day"

To justify the partial government shutdown, Republicans have argued that America’s southern border is in desperate need of reinforcement.

Some federal employees have been prevented from working or have worked without pay since the shutdown started in December, when Republicans controlled the House, Senate and White House. As part of negotiations to reopen the government, President Donald Trump has requested $5.7 billion for his wall project along the southern border.

Trump and other Republicans, including Rep. Ted Budd of North Carolina, have characterized the issue as a humanitarian crisis. In a tweet on Jan. 9 and his newsletter on Jan. 11, Budd said many migrants are being exploited.

"We have a crisis at our border with 2,000 inadmissible migrants arriving every day," he also said.

Is it true that 2,000 "inadmissible" migrants arrive every day at the southern border?

"Inadmissible" migrants are those who are turned away by border agents at ports of entry for any of a variety of reasons (such as lacking the proper paperwork).

The agency also tracks "apprehensions," which refers to unauthorized migrants taken into custody between ports of entry.

A chart, recent press release and other stats from the border protection agency provide useful information for rating Budd’s statement.

Turns out, Budd’s claim is true only if readers group together "inadmissible" and "apprehended" migrants (which they’re likely to do, since most are unfamiliar with government lingo), and if the daily average is measured using a specific time frame.

Let’s look at how Budd is way off if we look exclusively at inadmissible migrants.

Budd’s claim remains off if we look at the rest of calendar year 2018. Customs and Border Protection (CBP) counted 9,771 inadmissible migrants in October, 10,600 in November, and 10,029 in December.

That totals 30,400 inadmissible migrants over 92 days, which averages out to about 330 per day. That’s nowhere near the 2,000 figure Budd mentioned in his newsletter.

Now let’s look at what happens when we conflate inadmissible migrants with those who were apprehended.

What about calendar year 2018? By our calculations, an average of 1,618 people per day were either apprehended or denied entry by border agents in 2018. 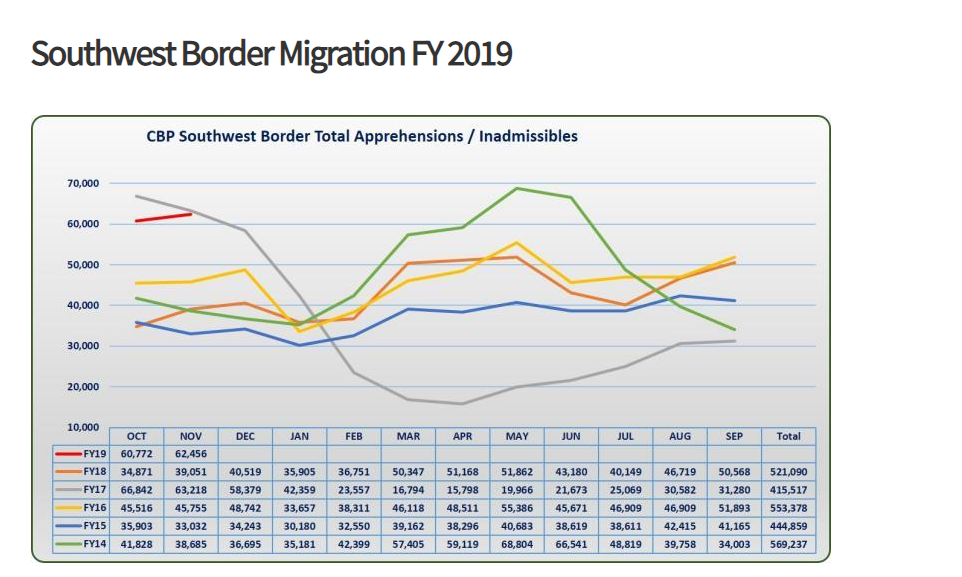 Where Budd has a point

Using the aforementioned CBP data, the only way PolitiFact NC could get Budd’s math to work was by considering the average number of both inadmissible and apprehended migrants in the fourth quarter of the 2018 calendar year.

CBP counted a total of 184,010 inadmissible and apprehended migrants over October, November and December. That averages out to approximately 2,000 migrants apprehended or stopped by Border Patrol over the last 92 days of 2018.

The daily average hits 2,020 migrants per day if you cut out October and look at inadmissible migrants and apprehensions over the two most recent months: November and December. But if you look at December, alone, the average dips down to about 1,961.

But here’s another piece of context that could help us understand the number of migrants who are being detained at the southern border: asylum seekers are counted by CBP among those who are inadmissible or apprehended.

Jessica Bolter, a research assistant at the Migration Policy Institute, noted that, in fiscal year 2018, 27 percent of migrants who made a "claim of credible fear" went on to be granted the right to seek asylum.

"This does not mean that 27% of people who made credible fear claims in (fiscal year) 2018 were ultimately approved for asylum … Asylum applications filed in a given year are rarely, if ever, completed the same year due to the immigration court backlog," Bolter said in an email..

"But," she added, "the majority of those who made credible fear claims were allowed to stay, if only temporarily, while they waited for their asylum hearings."

In total, about 6,000 migrants who passed through "credible fear screening" (27 percent of all completed cases in which an asylum application was filed) established that they should be granted asylum, according to Homeland Security spokeswoman Katie Waldman.

"The vast majority of asylum applications are not meritorious," according to a statement Waldman relayed to PolitiFact. And that can be problematic, the statement says.

"Low standards for claiming a fear of persecution have allowed aliens with meritless claims to illegally enter our country, claim ‘credible fear’, and then in many cases be released pending lengthy proceedings though the statute calls for mandatory detention," Waldman’s statement says. "A combination of resource constraints and questionable court decisions leading to loopholes in our immigration system have handicapped DHS’s ability to detain them."

There is some overall truth in Budd’s claim that, every day, there are indeed hundreds of migrants who are found not admissible. But the only way to get the number he used is to use a very broad definition of "inadmissible," use the most narrow time period, and disregard migrants who are granted the right to seek asylum. We rate the claim Half True.

Email correspondence with Katie Waldman, spokeswoman for the U.S. Department of Homeland Security.