Cory Booker
stated on July 5, 2019 in an interview:
"In 2017, we had more marijuana possession arrests in our country than all other violent crimes combined."

Democratic presidential candidate Cory Booker likes to quote statistics, particularly when he’s indicting what he sees as unfair treatment of marijuana offenders as compared to those commit violent crimes.

"We have people that have criminal convictions for doing things that two of the last three presidents admitted to doing. And so, we have a justice system that is not equal justice under the law," the U.S. senator from New Jersey said in a Las Vegas TV interview.

"We have people who can’t get jobs, can’t get business licenses because of nonviolent drug crimes. And especially at a time when we’re legalizing things like marijuana. In 2017, we had more marijuana possession arrests in our country than all other violent crimes combined. And so, I’m going to fight to end this."

The arrests claim is one Booker has made before; and national news media have reported a similar statistic.

As Booker indicated, legalizing marijuana is on the upswing.

PolitiFact reported in 2018 that two in three Americans favor marijuana legalization, a record-high measure of public support, and a majority of states now permit legal use in some form. That’s despite the fact that, under federal law, pot is a Schedule I drug, with "a high potential for abuse."

As for Booker’s claim, according to the FBI’s Uniform Crime Reporting (UCR) database, law enforcement nationwide made an estimated 518,617 arrests for violent crimes in 2017. That includes murder and nonnegligent manslaughter, rape, robbery and aggravated assault.

That figure is lower than the 599,282 arrests made for possession of marijuana.

(In cases where a person is arrested for a violent crime and marijuana possession, it is recorded as a violent-crime arrest because that is the more serious offense, according to the UCR handbook.)

An arrest means there was probable cause that a crime was committed. It doesn’t necessarily mean a criminal charge was filed, or that a person was convicted.

Out of curiosity, we took a look back two more years of arrest numbers, as well: 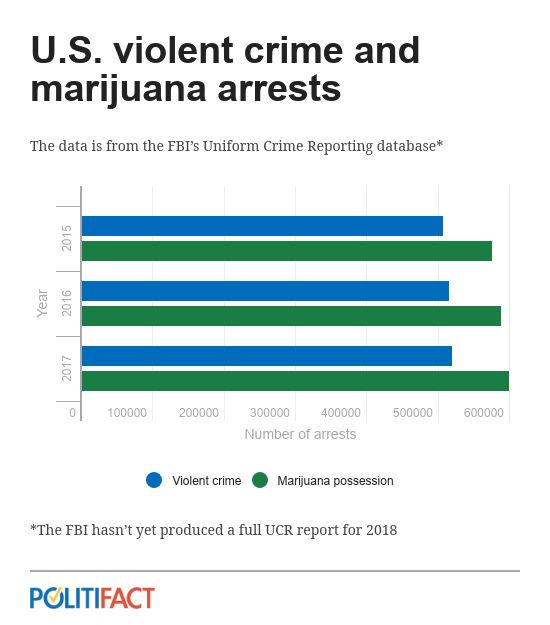 The FBI hasn’t yet produced a full UCR report for 2018.

As for why arrests for marijuana possession exceed those for violent crimes, we asked Michael Collins, director of national affairs for the Drug Policy Alliance, which works to change marijuana laws across the country. He told us it’s because "it’s the easiest type of arrest to make; the evidence is already there."

Some police commanders say they have stepped up drug enforcement overall to tackle the opioid epidemic, and marijuana arrests are up accordingly, the Philadelphia Inquirer reported. Other commanders assert that as more jurisdictions such as Philadelphia have begun treating marijuana with leniency, people have become more flagrant in its use, leading to more arrests.

Booker said, "In 2017, we had more marijuana possession arrests in our country than all other violent crimes combined."

FBI figures show 599,282 arrests nationwide for possession of marijuana and 518,617 arrests for violent crimes, which include murder and nonnegligent manslaughter, rape, robbery and aggravated assault.

Washington Post, "Police arrest more people for marijuana use than for all violent crimes — combined," Oct. 12, 2016

American Civil Liberties Union and Human Rights Watch, "Every 25 Seconds  — The Human Toll of Criminalizing Drug Use in the United States," Oct. 12, 2016

Newsweek, "Marijuana Arrests Were Up Last Year—and You're Paying Billions For It," Sept. 26, 2018

Georgia Gun Owners
stated on October 30, 2022 an ad:
"Raphael Warnock and Stacey Abrams are radical communists and, if they get their way, gun owners here in Georgia will be completely disarmed."

Liz Cheney
stated on October 28, 2022 an ad:
Kari Lake and Mark Finchem “have said that they will only honor the results of an election if they agree with it."

Club for Growth Action
stated on October 21, 2022 an ad:
Catherine Cortez Masto "was the deciding vote” to send COVID-19 stimulus checks to more than 1 million prisoners.

Catherine Cortez Masto
stated on October 5, 2022 an ad:
Says Adam Laxalt said it is “good news” that “a lot of those Hispanic small businesses never reopened” after the pandemic.