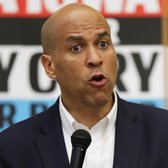 Cory Booker is a senator from New Jersey. He was first elected to the Senate in 2013, making him the first African-American senator from New Jersey and the first African-American elected to the Senate since Barack Obama in 2004. Booker served as mayor of Newark from 2006 until 2013. He has a bachelor's degree in political science and a master’s degree in sociology from Stanford University, an honors degree in United States history from The Queens College as a Rhodes Scholar and a J.D. from Yale Law School. In 2019, he ran for the Democratic nomination for president and suspended his campaign in January 2020.