California Sen. Kamala Harris claimed yesterday that during her time as the state’s attorney general, she "disagreed" with President Obama’s use of the Secure Communities program that partnered local and federal authorities to deport people who were in the country illegally.

Harris was elected California attorney general in 2010 and re-elected in 2014.

She made the claim about disagreeing with Obama during her breakout performance at the Democratic presidential debate in Miami, along with other impassioned assertions on civil rights and the economy that we fact-checked here.

Harris was responding to a moderator’s question of whether a person living in the United States, "without documents, and that is his only offense, should that person be deported?"

"I will say — no, absolutely not, they should not be deported. And I actually —  this was one of the very few issues with which I disagreed with the administration, with whom I always had a great relationship and a great deal of respect.

"I disagreed with my president, because the policy was to allow deportation of people who by ICE's own definition were non-criminals. So as attorney general, and the chief law officer of the state of California, I issued a directive to the sheriffs of my state that they did not have to comply with detainers, and instead should make decisions based on the best interests of public safety of their community."

President Obama halted Secure Communities in 2014 following opposition from states and cities who said it eroded trust between local police and undocumented communities. President Trump restarted it shortly after taking office in 2017.

Given the controversial history of the Obama-era policy, we wanted to know: Did Harris really disagree with it? And, if so, how much? And what did she do about it? 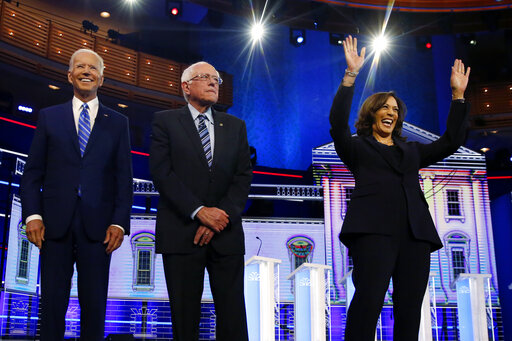 There’s some evidence Harris disagreed with Secure Communities. In 2014, then-AG Harris advised local police and sheriff’s departments, in the form of a bulletin, that they did not have to comply with ICE detainer requests.

"Federal immigration detainers are voluntary and this bulletin supports the TRUST Act and law enforcement leaders’ discretion to utilize resources in a manner that best serves their communities," Harris said in a news release that announced the bulletin.

Former Gov. Jerry Brown signed The Trust Act  in 2013. It limited local police and sheriff’s cooperation with federal immigration agents, and was a precursor of the state’s sanctuary law, SB 54, signed by Brown in 2017, which further limited that cooperation.

Harris’ news release said that two years earlier, in 2012, she issued another "information bulletin" to law enforcement agencies clarifying that federal immigration detainers "are not mandatory, but are merely requests enforceable at the discretion of the state and local agency."

Several immigration experts said these memos show Harris resisted the Obama-era policy, at least to some degree. But, they said, that resistance did not take place early on.

"Attorney General Harris was not as aggressive in opposing President Obama’s immigration policies as Attorney General Xavier Becerra has opposed President Trump’s," Johnson added. "She could be criticized for that but she was a Democrat wanting to work with a Democratic administration.  It is clear that Senator Harris now is quite willing to criticize the immigration enforcement policies of this Republican administration."

It found Harris remained "largely silent," from 2011 to 2013 as activists and lawmakers worked to pass the Trust Act, a landmark statewide sanctuary law over the objections of then-Gov. Jerry Brown and the Obama administration.

"The Trust Act was a new way to limit ICE at the state level," Angela Chan, policy director for Asian Americans Advancing Justice, told the HuffingtonPost. "We were at the forefront. She didn’t get why it was important to support it at the time. … She only signaled support when it was safe to do so."

Sameer Ashar, a UCLA law professor and former co-director of the UC Irvine Immigrant Rights Clinic, told us the record is mixed on Harris’ position.

"My general sense is there was a lot of grassroots movement pressure on elected officials in California to direct local law enforcement not to cooperate with the federal government on immigration enforcement," Ashar said. "And she responded to that pressure. She took some positive steps, but it was under great pressure."

He added: "She never led in California on the fight at the time. If anything, she led from behind … She has evolved over time."

Harris’ campaign cited a 2009 Los Angeles Times article that paraphrased then-San Francisco District Attorney Harris as saying, "It is not the duty of local law enforcement, she said, to enforce federal immigration laws."

The campaign also cited a 2011 San Francisco Chronicle report. It quoted then-AG Harris’ spokeswoman saying her office "was broadly examining the issue of Secure Communities and taking a serious look at the program."

By late 2012, Harris was more vocal in her opposition, describing the program in news articles as "flawed," and "has not held up to what it aspired to be," as her campaign pointed out.

Kamala Harris claimed she "disagreed" with the Obama administration on a deportation program where local police and sheriffs partnered with federal immigration agents to remove people who were in the country illegally.

As attorney general in 2012 and again in 2014, Harris issued bulletins telling local law enforcement they did not have to comply with the program’s federal immigration detainer requests. She was also quoted in news articles in late 2012 strongly opposing the program.

But immigration experts say Harris was largely absent in California’s early efforts to pass laws limiting local cooperation with federal agents. She resisted the program, they said, only after pressure built to pass those state laws and then "led from behind," as one expert described it.

Harris’ statement about disagreeing is partially accurate, but it leaves out some key history and takes things out of context.

We rate Harris’ claim Half True.

Are paychecks failing to keep up with inflation?

Does teacher pay fall short of the living wage in 30 states, as Kamala Harris said?

PolitiFact California, Kamala Harris made forceful claims on civil rights and immigration. Did she get them right?, June 27, 2019

PolitiFact, Who is Kamala Harris? A bio of the Democratic presidential candidate, June 14, 2019