Kamala Harris
stated on March 8, 2019 in a tweet:
Says Trump administration is "raiding money" from military service member pensions to pay for the border wall.

California Senator and Democratic presidential candidate Kamala Harris has sharply criticized President Trump for his plans to divert military funds to pay for a wall along the U.S.-Mexico border.

Trump in February declared a national emergency on the border to access billions of dollars that Congress refused to give him to build the wall.

One of Harris’ recent attacks caught our attention: She claimed the Trump administration was "raiding money" from the military pensions of service members to pay for the barrier.

"Members of our military have already given so much. Raiding money from their pensions to fund the President’s wasteful vanity project is outrageous. Our servicemembers deserve better," Harris said on March 8 on Twitter and Facebook. 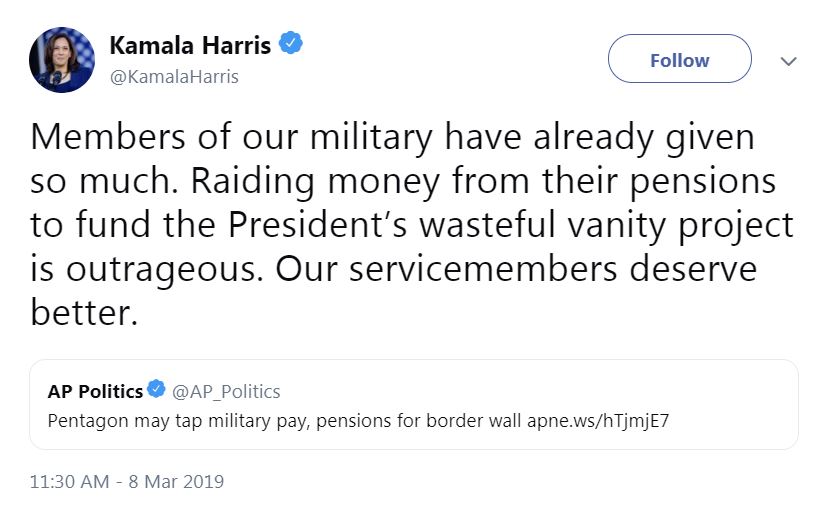 Is the Trump administration really planning to raid military pensions?

FactCheck.org, along with some social media users who commented on Harris’ posts, described her claim as misleading or wrong. We decided to fact-check her provocative statement ourselves.

Democratic leaders have called Trump’s emergency declaration a power grab, and some Republicans also said it sets a dangerous precedent.

The move allows the president to transfer $3.6 billion from military construction projects to the wall, according to the White House. It also gives him the ability to tap $2.5 billion from drug interdiction programs and $600 million from a Treasury Department asset forfeiture fund.

Speaker Nancy Pelosi, D-Calif., and Senate Minority Leader Chuck Schumer, D-N.Y., said in a joint statement in February: "The Congress will defend our constitutional authorities in the Congress, in the Courts, and in the public, using every remedy available."

The House and Senate voted this month to block the declaration. Trump vetoed the joint resolution shortly after. A bid to override the veto failed this week in the House.

Sixteen states, including California, have filed a federal lawsuit challenging Trump’s authority to divert funds for the border wall.

But the first paragraph describes the money as "leftover funds," casts a different light.

The Pentagon is planning to tap $1 billion in leftover funds from military pay and pension accounts to help President Donald Trump pay for his long-sought border wall, a top Senate Democrat said Thursday.

The money is available because the Army missed a recruitment goal by 6,500 enlistees. Additionally, fewer soldiers opted to take financial incentives for voluntary early retirement, according to the article.

The Pentagon plans to move the extra money to its drug interdiction account, freeing it up to spend on border barriers, the AP reported.

To further assess Harris’ claim of raiding pensions, we spoke with three experts on federal defense budgets. Each said the senator’s statement was inaccurate.

He said the money is leftover in certain Army personnel accounts.

"It’s a separate issue worth debating whether that money should be used for the border wall or should be used for other purposes within the military. But the fact that they’re moving money out of these accounts is not an indication that anyone is cutting military pay or cutting benefits or pension payments. That’s not the case."

No military service member’s pension would be reduced, he said.

Mark Cancian, who worked for the White House Office of Management and Budget on defense budget strategy during the Obama administration, agreed that Harris’ statement is wrong.

"The answer is, ‘No.’ They are not raiding military pensions," Cancian said. "I’m sure the Army had some places they would have preferred to send that money. But they are not taking any money from pensions."

Cancian is now a senior advisor with the Center for Strategic and International Studies.

"This is another example of there being a lot of confusion about what it means to cut something in the budget," Sharp said.

Transferring money after an agency overestimated how much something would cost is not the same as a cut, he said.

"The Department of Defense has to budget in advance for things that are unpredictable," Sharp said. "The money that’s leftover is what the Trump administration is trying to reallocate. Does that constitute a cut? In my opinion, no. That’s not a cut."

When the Pentagon has funds remaining in one account, it can "reprogram" the money to others, such as a health care or fuel accounts that have a budget shortfall, Cancian said.

If that doesn’t happen, Congress "will rescind that money and use it for other purposes," Harrison, of the Center for Strategic and International Studies, said.

The Department of Defense did not respond to a request for comment.

A spokesperson for the Harris campaign provided a written statement:

"The AP reported that money is being transferred from a fund dedicated to pensions of armed service members. The President is trying to circumvent Congress who refused to give him funding for this wall by diverting resources from other military funds."

The spokesperson would not say whether the senator stood by the original claim.

Sen. Kamala Harris claimed the Trump administration was "raiding money" from the military pensions of service members to pay for the wall.

In reality, the Pentagon plans to move leftover pay and retirement funds that are available because fewer soldiers opted for an early retirement program and because the Army missed a recruitment goal by 6,500 enlistees.

No service members would lose pay or retirement benefits as a result of the move, according to experts on federal defense budgets.

The headline in the article Harris relied on did not make this clear. But it’s important for anyone, especially a public official, to read beyond a headline before making such a claim.

The debate over whether the Trump administration should tap this money is a separate issue.