Patricia Pike
stated on April 11, 2019 in a legislative debate:
"Over 30 states passed the legislation to ban powdered alcohol," and Missouri is not one of them

A former school counselor, Pike said she noticed the issues of powdered alcohol. She said the product can be easy concealed and carried, possibly increasing underage drinking.

What is it, exactly? According to previous Missourian reporting, powdered alcohol resembles a packet of instant coffee or Kool-Aid once mixed with water or other liquids. The product name is Palcohol, marketed as "a powder version of vodka, rum and three cocktails....with the same alcoholic content."

Invented by five Dutch students in 2007, powdered alcohol was approved in April 2014 by the U.S. Alcohol and Tobacco Tax and Trade Bureau and in March 2015 by the federal government. The product is legal and unregulated in Missouri.

The House passed Pike’s bill House Bill 65, by a 142-4 votes on April 11, which would add powdered alcohol to the legal definition of "intoxicating liquor." On April 18, the bill was referred to the Senate General Laws Committee.

We decided to take a closer look at Pike’s statement that more than 30 states have banned the substance.

A wave of state bans

When we asked Pike about her claim, she said she was referring to 2017 data from the National Conference of State Legislatures, a nonpartisan research group.

Ian Lang
stated on May 18, 2011 in a state Senate committee hearing
"Rhode Island continues to have the highest rates of substance abuse in the country." 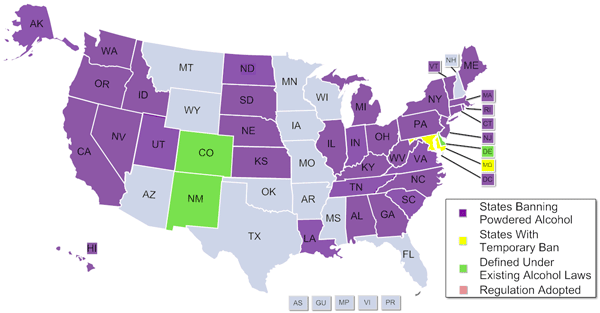 In 2015 when New York enacted its ban, Gov. Andrew Cuomo said he was concerned about the safety of the substance.

"This dangerous product is a public health disaster waiting to happen," Cuomo said according to the Washington Post. "I am proud to sign this legislation that will keep powdered alcohol off the shelves and out of the wrong hands."

We reached out to the NCSL to find out if they had more recent data.

Heather Morton, program principal in fiscal affairs, gave us the 2018 and 2019 legislation lists regarding powdered alcohol.

Pike said, "Over 30 states passed the legislation to ban powdered alcohol," and Missouri is not one of them.

The latest count shows Pike is safely in the right ballpark, with 36 states and Washington, D.C., cracking down on this substance.. We rate Pike’s statement True.

Tracy McCreery
stated on April 8, 2019 a legislative debate:
"Suicide is the second-leading cause of death among 15-19 year olds and 25-34 year olds in Missouri."

Patricia Pike
stated on April 11, 2019 a legislative debate:
"Over 30 states passed the legislation to ban powdered alcohol," and Missouri is not one of them

Dave Griffith
stated on February 12, 2019 a hearing:
"Every county in the state of Texas has a veterans court."

Hannah Kelly
stated on January 29, 2019 an education budget hearing at the Missouri state capitol:
"The schools in my district don't have a kitchen."