Tom Steyer
stated on October 15, 2019 in a Democratic presidential debate:
"People haven't had a raise -- 90 percent of Americans have not had a raise for 40 years."

At his first debate appearance as a Democratic presidential candidate last night in Ohio, Steyer repeated his call to remove what he termed "the criminal in the White House."

Steyer’s claim that caught our attention was that the vast majority of Americans haven’t received a raise for decades.

"I would undo every Republican tax cut for rich people and major corporations," Steyer promised. "But there's something else going on here that is absolutely shameful, and that's the way the money gets split up in terms of earnings. As a result of taking away the rights of working people and organized labor, people haven't had a raise -- 90 percent of Americans have not had a raise for 40 years."

Was his claim about raises accurate? We set out on a fact check.

We turned to PolitiFact’s analysis in April of a similar claim made by Democratic presidential contender and South Bend Mayor Pete Buttigieg. We’ll place a rating on Steyer’s claim based on what PolitiFact found.

"Since 1973, the income of the bottom 90 percent, so pretty much all of us, didn’t budge, or even retreated a little bit," Buttigieg claimed.

PolitiFact investigated whether income levels for most people -- adjusted for inflation, which economists consider a necessity for such comparisons -- haven’t increased since 1973. It found that "income levels have actually risen beyond inflation during that period," but the share of income taken by the bottom 90 percent hews pretty closely to what Buttigieg said.

It rated the mayor’s claim Half True, meaning it is partially accurate but leaves out important details or takes things out of context.

In its fact check, PolitiFact reviewed data from the Congressional Budget Office, the nonpartisan number-crunching arm of Congress, covering 1979 to 2015, most of the period in question.

The figures CBO used were adjusted for inflation and federal taxes, but not for state and local taxes. They showed income growth for people in four different economic ranges: the lowest 20 percent of the income distribution, the middle 60 percent, the 81st percentile to the 99th percentile, and the top 1 percent. They didn’t mirror Buttigieg’s precise parameters, but economists said they are useful for showing whether the mayor was broadly right or not, PolitiFact reported. 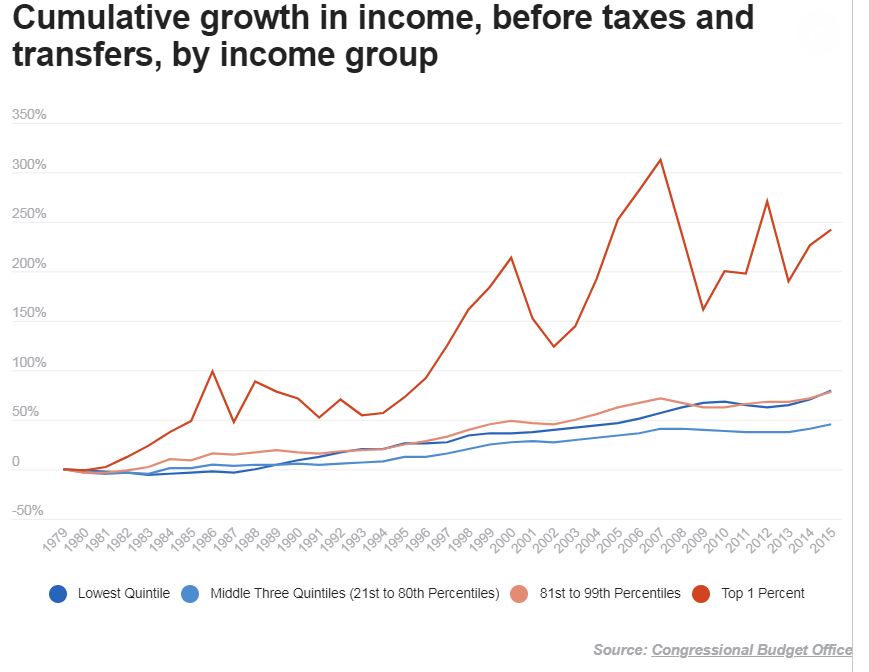 The top 1 percent, in red, has the most unique and most impressive growth. The other income groups show positive but much slower growth, after adjusting for inflation.

This undercuts Buttigieg’s assertion that for most people, income "didn’t budge, or even retreated a little bit," since the 1970s, PolitiFact said.

Other data supports the claims by Buttigieg and Steyer.

Inflation-adjusted figures from the Economic Policy Institute, for example, show clear wage stagnation for the bottom 60 percent of the income scale. The rate did go up for the 70 and 80 percent levels, which means the 90 percent figure would be a bit exaggerated.

PolitiFact also cited the World Inequality Database. It shows the bottom 50 percent and the next 40 percent -- essentially the 90 percent that Buttigieg cited -- have taken declining shares of the nation’s income since 1973. By contrast, both the top 10 percent and the top 1 percent have seen their shares grow.

When we asked Steyer’s campaign for evidence supporting his claim, it pointed to an August report by the Pew Research Center. It found today’s real average wage, defined as the wage after accounting for inflation, has "had some ups and downs," but "has about the same purchasing power it did 40 years ago. And what wage gains there have been have mostly flowed to the highest-paid tier of workers."

Tom Steyer claimed at the Democratic presidential debate in Ohio that, "People haven't had a raise -- 90 percent of Americans have not had a raise for 40 years."

PolitiFact in April fact-checked a similar claim by South Bend Mayor Pete Buttigieg: "Since 1973, the income of the bottom 90 percent, so pretty much all of us, didn’t budge, or even retreated a little bit."

It found that income for every group, as calculated by the Congressional Budget Office, has actually increased beyond the rate of inflation since the 1970s. However, another measurement -- the share of income taken by the bottom 90 percent -- has indeed declined since 1973. It rated the mayor’s claim Half True.

We agreed with PolitiFact’s assessment and rated Steyer’s claim Half True, as well.